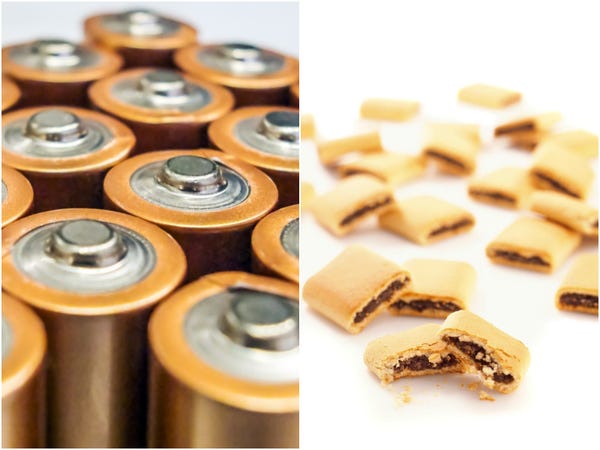 Some products, especially those that use technology, seem like they were invented recently.

Though modern science and medicine have made great advancements in recent decades, many of their predecessors date back far earlier.

Vaccines , for example, have been around for hundreds of years the first one was created to treat smallpox. Today, vaccines help control a number of infectious diseases, and have become the single greatest tool in eradicating them.

Take a look at all the products that were invented earlier than you’d think.

Chris Weller contributed to a previous version of this post.

Vaccines were first developed in 1796 by Edward Jenner, who was searching for a way to treat smallpox.

Edward Jenner introduced the first vaccine before the turn of the 19th centurya rudimentary version of the cowpox virus to eliminate smallpox.

Though the boy came down with a fever initially, his illness quickly abated. When Jenner later introduced the smallpox virus, the boy was immune.

The first battery was invented in 1800 by Alessandro Volta.

Volta initially called the device an “artificial electric organ,” in response to the prevailing theory at the time that animal tissue was necessary for conductivity.

Instead, he used stacked metal disks and brine-soaked rags. They conducted electricity. The battery was born.

So, with only a rudimentary knowledge of electricity, Berliner set to work on a so-called loose-contact transmitter, which amplified the noise that came from Bell’s existing model.

Bell’s company, the American Bell Telephone Company, was so impressed with Berliner’s work that it hired him as an assistant in its lab.

A few days after Christmas in 1886,Josephine Garis Cochran submitted arequest to the US Patent Office.

Cochran went on to found a manufacturing company for her invention, which eventually became KitchenAid.

In a weird transition from ordinary eyeglasses, the contact lenses of the late 19th century were made entirely of glass and meant to cover a person’s whole eye.

They were initially called “scleral lenses,” referring to the white of the eye.

Fig Newtons were first sold in 1891. A cookie maker from Ohio, Charles M. Roser, crafted their recipe and the tech to bake them.

Roser sold his recipe to Kennedy Biscuit Works , which would later become Nabisco.

The mass production of Fig Newtons became possible through a machine that used two funnels: the inner funnel that supplied jam and the outer funnel that pumped out the dough. Roser would later patent it.

Reno’s first model was installed at the Old Iron Pier at Coney Island as a ride. The invention quickly gained favor among the Industrial Revolution’s miners and factory workers, who could spare their legs the long journey to work.

Jell-O was created by Pearle Bixby Wait, a carpenter and cough syrup manufacturer, in 1897.

In reality, gelatin itself has been around since the 15th century, but the traditional Jell-O we know and love today was created at the dawn of the 20th century.

Nabisco introduced Triscuits over a century ago, in 1903.

Since the wheat crackers were baked near Niagara Falls, Nabisco advertised them as being ” baked by electricity .” There’s even a theory that electricity is where Triscuits get their name the “tric” in electricity.

The first Oreo was created in 1912 inside a Nabisco factory in New York City.

According to Gizmodo , Oreos were released as part of a trio of “highest class biscuits” that included Mother Goose Biscuit and Veronese Biscuits. However, neither of the other two biscuits remain today and Oreos have only grown in popularity .

The first drone was called the Ruston Proctor Aerial Target, and was launched in 1917.

The Ruston Proctor Aerial Target was a radio-controlled pilotless airplane, and was based on technology from the inventor Nikola Tesla.

The Aerial Target was meant to act as a flying bomb that could be piloted into enemies. However, it was never used in a combat.

Cheesy spread Velveeta was invented by Emil Frey of the Monroe Cheese Company in 1918.

At the time of its invention, it wasn’t supposed to even be its own product. Velveeta was originally created to stick in the cracks of broken cheese wheels.

Kraft purchased Velveeta in 1927 and marketed it as a healthier version of cheese, and the rest is history. Velveeta can now be found in cheesy bites,macaroni and cheese, and cheesy skillets, as well as in its original form.

A. H. Grebe, a radio manufacturer from New York, created the first car radio in 1919.

Grebe tested out an early version of a car radio that would later come to define a budding car culture of the 1920s.

R. Stanton Avery invented what would become stickers in 1935.

According to The New York Times , Avery invented a machine to make self-adhesive labels with a $100 investment from his future wife Dorothy Durfee, who was a teacher.

Avery started a company in 1935 called Kum Kleen Products, but renamed it to Avery Adhesives in 1936. The brand still lives on today as Avery Dennison .

The first artificial heart was invented in 1961 by Paul Winchell and Dr. Henry Heimlich.

With help from Dr. Henry Heimlich, comedian and ventriloquist Paul Winchell filed his patent for the world’s first artificial heart in 1961.

The device included a small battery pack worn outside the body that controlled the pumping mechanism within.

While Winchell’s design was accepted two years later, it wouldn’t be until 1982 that the invention would see the first successful implantation in a human.

The internet was actually created as early as 1969.

Shortly before midnight on October 29, 1969, engineers from UCLA sent Stanford Research Institute the word “LOG” one letter at a time over anewly formed network called ARPANET.

It was a primitive system, but the setup held the core ingredients that would eventually create the internet as we know it.

The first cell phone was invented by Motorola researcher Martin Cooper in 1973.

The prototype offered just 30 seconds of call time and required 10 hours to charge not to mention, it weighed almost 2.5 pounds.

Though GPS was made available to consumers relatively recently, it has been around since 1978.

Known as Navstar 1, the first satellite to reach orbit did so in 1978. It has long since been taken out of orbit, but it helped usher in a new era of interconnectedness around the world.

Thanks to the 1978 launch, we can now yell at our phones for being too pushy with driving directions.

MP3 players were created by British inventor, Kane Kramer, in 1979.

Two decades before Apple unveiled the iPod, Kramer filed a patent for his digital audio music player, which he called the IXI.

The device was roughly the size of a pack of cigarettes, featured a four-button control system, and could hold about three and a half minutes of music.

“In a matter of seconds,” the filing read, “a live performance at Carnegie Hall can be recorded and available in shops all over the world.

Mark Zuckerberg warns of dangers of ‘China-style regulation’ of internet