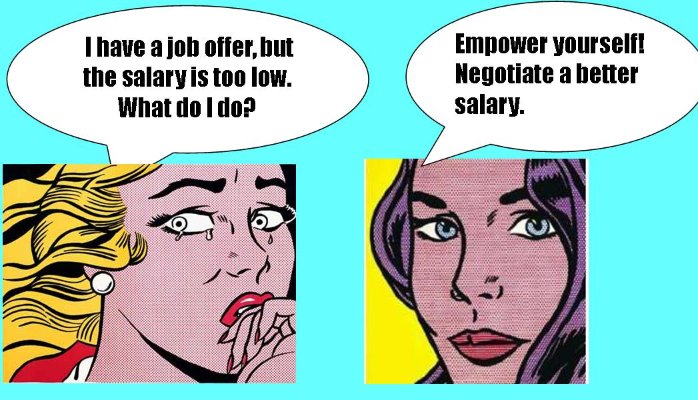 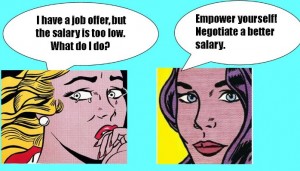 Many of us shy away from asking for more and better. More money. Better working arrangements. A larger team. Better access to material resources. Higher fees. Better prices. Some of us are afraid to ask. Some of us, especially women, have been taught not to ask—we’ve been taught to be self-sacrificing, not self-serving. Some of us do ask, but stop short of asking for what we really want or what we’re truly worth.

We’re afraid they’ll laugh at us, express shock and dismay, fire us or withdraw their job offer.

Whatever your reason, by not asking, you’re missing out on more than just money; you’re putting your long-term opportunities and earning potential at stake. If you’ve ever stopped before negotiating your true market value, read on for five surprising facts your bargaining partner hopes you don’t understand.

1. The Negotiation Doesn’t Start Until Someone Says “No”

One of the greatest inhibitions to asking for your true market value is your understandable fear of rejection. This is particularly true in the post-’08 meltdown and continuing jobless recovery from the worst economic calamity since the Great Depression. Our reluctance to negotiate past “no” can be quickly overcome when we understand that it’s not really a negotiation if we’re asking for something we already know our bargaining partner also wants.

Negotiation is a conversation whose goal is to reach an agreement with someone whose interests are not perfectly aligned with yours.

Who has relationships with people who always want what we want? No one I know. If we want to get what we’re entitled to or capable of getting, we either have to negotiate past “no” or spend the rest of our work lives being victimized by people who are happy to place themselves and their needs ahead of ours. Savvy business women and professionals know that the word “no” simply signals an opportunity to problem-solve, to learn which of the parties interests are conflicting and which are overlapping, and how to create more value than it first appears the parties are able to exchange with one another.

2. Your Bargaining Partner Will Be Happier if You Make Several Concessions Than if He Gets What He Thinks He Wants

This is true in the same way that “the earth is round” or “the universe is expanding” are true. In experiment after experiment, social scientists have proven that people are not particularly happy when they get what they think they want. They’re happier when their bargaining partner says “no” a couple of times before he or she says “yes.”

Because negotiators are more afraid of leaving money on the table than they are about getting what they think they want.

If I ask for a 5% raise and my boss says “yes” without hesitation, I generally suffer from buyer’s remorse, certain that if I’d asked for 7% or maybe even 10%, my bargaining partner would have given it to me.

This is just one of the many reasons why it’s important to ask for more than you actually want. You won’t be happy if your bargaining partner accepts what you offer on the first move. The other two reasons are equally important. One, to give yourself enough room to bargain and two, to set one end of the bargaining range (“anchoring”) – a number or proposal that will influence your bargaining partner in its direction throughout the course of the negotiation.

If you’ve adequately researched your negotiation partner’s interests and your own market value, you needn’t fear making the first offer, hoping that his or her first offer will be far more than you’re expecting. Waiting for the “other guy” to make the first offer is the mark of an amateur. Anchor first and anchor high, and you’ll be playing in the big leagues.

Though we seldom reflect on our relationship with money, if asked we’d have to admit that money itself—in its tangible form—can neither sustain life nor enhance it. Cash, checks, credit, money orders, and wire transfers cannot themselves be consumed. Grant deeds and lease agreements cannot be inhabited. Stock certificates cannot create warmth in winter nor illuminate the dark of night.

That being the case, there is no relationship and every relationship between any given sum of money and what it can buy. With $20 in my wallet, I can purchase dinner for five at McDonalds or a bottle of cheap Bordeaux at a local restaurant. I can pick up a pair of sandals at Payless; subscribe to Time magazine for six months; rent a surfboard at the beach; fill half my tank with gas; hire a day laborer to do odd jobs on a Saturday afternoon; or, according to my Sunday magazine, save a child in a developing country from starvation. Sentimental pop songs to the contrary, enough 20s can even buy me love.

Before negotiating any deal, take a look at the way in which you “value” money. Is it status you’re seeking? Security in your elder years? Education for your children? A meaningful break from work that takes you to a foreign country or high-end spa? Then ask your negotiation partner what she values, prefers, needs, fears, prioritizes, or desires. You’re apt to find yourself on the same page of value once you stop treating money as an objective measure of worth and start seeing it for what it is—a subjective experience that can make $1,000 act in the world as if it were $10,000.

4. Your Bargaining Strength is All in Your Head

The person who is perceived to have the least to lose from walking away from the deal on the table is the person with the greatest bargaining advantage. If you’re negotiating, both parties have a bottom line – a walkaway position. If those bottom lines don’t overlap, the party who signals his willingness to walk away will have the greater bargaining power.

Many say the Los Angeles or San Francisco or New York City real estate markets are over-heated and that everything is over-priced. It’s a seller’s market. It seems as if there are an unlimited number of people willing to pay “over asking” and many of them “all cash” for every home or condo or co-op for sale. Doesn’t that mean that all buyers are in a weak negotiating position and all sellers in a great one?

Not necessarily. Every seller is selling for a different reason. A considerable number of homeowners are retiring. Their kids are gone and they don’t need so much space anymore. Some of them have already signed up for a place in a retirement village or a condo in Palm Springs. They are pressured by time. They could pay for both residences for a month or two, but if it takes them six months to get the price they want, they will have spent the extra purchase price on rent or mortgage payments or homeowner fees in their new home.

The more knowledge you have of the hidden interests and constraints under which your bargaining partner is operating, the more negotiation power you have, even in a “seller’s” market.

But there’s even better news than that! If you act as if you are prepared to walk away from a deal unless you achieve your desired goal, your bargaining partner will be far more incentivized to meet your requirements or make serious problem solving efforts to create enough value so that both of you get what you most want.

5. Any Reason is Far Better Than No Reason and Nearly as Good as an Excellent One

When people estimate their value by the results their work has produced, they often hesitate sharing that information. If they can’t prove it, they think they can’t claim it. But here’s the super secret of all great negotiators:

You don’t have to prove something that justifies what you want; all you have to do is say it.

When you’re negotiating, you’re not in a court of law. You’re rarely making statements of fact that could land you in hot water for fraud if they prove to be untrue. You’re stating an opinion, and no less an authority than the Supreme Court of the United States has said there is no such thing as a false opinion.

In common parlance, you’re puffing. You’re taking credit for a result you in good faith believe you’re at least partially responsible for producing. And, as several commenters to this piece has said, if you believe others also contributed, give them credit too. You’re not a credit hog but you’re also not a wilting violet.

The social science research confirms that appearances are reality.

In one experiment, students were asked to cut in line at a local Kinkos. One group was told to give no reason, one a nonsensical reason, and one a good reason.

Here are the compliance rates:

So, go ahead. Take credit for last quarter’s increase in net profits even if you can’t prove it. You don’t have to file a declaration under penalty of perjury or testify under oath on the witness stand. You’re highly unlikely to be cross-examined because your negotiation partner can’t prove that your causal assertion is untrue. Millions of years of “common sense” support your assertion that correlation is causation.

Feel free to try out these strategies and tactics at home with the people closest to you. Can’t agree on a movie? Be willing to walk away if your choice isn’t met. Give a reason, any reason, why your choice would be better for everyone, not just for yourself. Understand that the push-back you’re getting is just an opportunity to problem-solve in a way that satisfies your interests and your roommate’s or spouse’s interests at the same time. Do this at home, and then try it out with that raise you haven’t gotten for the past five years. Then, let me know how it went!

So many commenters have mentioned doing your research to know your market value that I’d wrote a post on using PayScale.com – for employers, employers’ representatives and employees. Check it out. There are a ton of truly terrific resources there for employees to get within their employer’s mind set and for employers to understand the market for employees

How to Take Your Business Online in 9 Steps