For a long time, the sole purpose of a car was to take us from point A to point B as fast as traffic conditions would allow us to. However, rapid advancements in technology has led to a surge in demand from many of us – we wanna have more comfort, entertainment, functionalities, and so on in our cars than ever before. In that vein, we have come up with a wishlist of the things we would like to see (from a geek’s perspective) in cars of the future.

Just like how phones have evolved into smartphones, perhaps cars should also take a similar route and evolve into ‘smart’ cars equipped with futuristic and (more importantly) practical features. In fact, some car manufacturers have already implemented a few of these things that we’re about to mention, but it’ll be nice to see them become standard features in all cars of the future.

Building on the familiar existing technology of knob and voice controls, Audi, in 2011, introduced a new feature that would provide unprecendented ease in controlling a car’s functions. The new feature is called MMI touch, and is actually an enhancement for their already exisiting Audi Multi Media Interface (MMI) system. 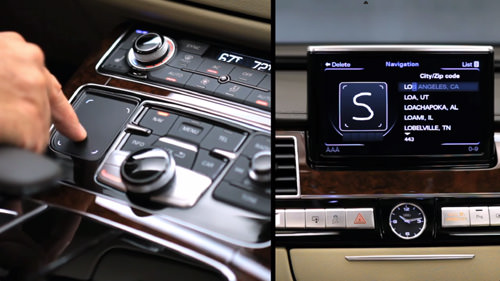 The best thing about MMI touch is that it enables drivers to input characters just by using a finger to “write” on the designated touchpad. This has a wide range of applications such as keying in addresses for navigation purposes, entering phone numbers or simply selecting songs to play. MMI touch also has support for a range of languages besides English. 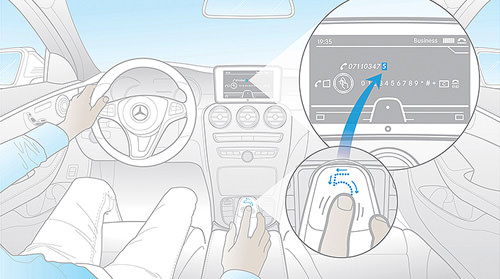 Of course, the usual knob and voice controls are still available as well – MMI touch just makes it a whole lot easier for you to access your car’s functions while you’re driving. And more recently, Mercedes-Benz has also introduced their own take on this enhanced gesture control concept.

Having augmented reality display on a car windscreen would add a lot of functionality to the car. We would be able to see information like speed, navigation details and even the name of an incoming call with minimalistic designs on our windscreens. 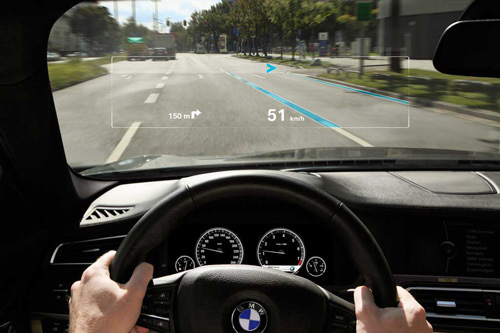 Head-up displays are definitely something of the future that we should look forward to. It’ll help us keep our eyes on the road by giving us all the relevant information without having to look at a center console display or our smartphones.

Imagine driving a car capable of running apps that are no less powerful than what you have on your smartphone right now. For starters, there can be specialized apps for certain countries or cities that could provide local information on restaurants, malls or other places of interest for travelers. 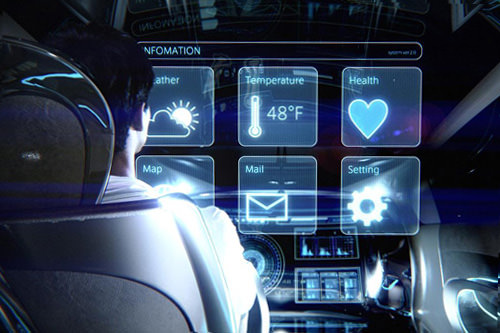 Toyota has already introduced a concept car called Fun Vii Concept Car that can do all of the above and more. “Vii” is an acronym for Vehicle, Interactive, Internet – this concept car basically allows the driver to be constantly connected with everyone including your friends and even other automobiles. What’s more, its exterior design can even be customized as shown in this short promotional clip.

While it will probably take some time before cars like Fun Vii get to production, cars with the ability to have firmware updates have already been made available on the market. These firmware updates could improve certain features of the car including the radio, tire pressure, Wi-Fi connectivity, and charging capacity. Tesla Model S, a 100% electric car, is one car that has such firmware updates.

As batteries used in existing electric cars are bulky and heavy, manufacturers have to find a suitable place to put the large amount of batteries, and at the same time, ensure that the car is well balanced throughout. What will be really cool is to have batteries hidden in plain sight by replacing the cosmetic parts of a car. 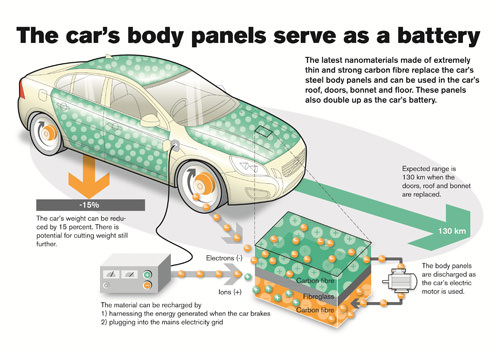 These parts could be the panels throughout the car on both the interior and exterior. Manufacturers won’t have to compromise on the appearance of the car as the batteries would be thin and bendable. Although technology has yet to catch up with this vision, it’s definitely something worth looking forward to.

Communication between vehicles doesn’t mean you can call up the car in front of you and ask it to move out of your way. It’s more like machines communicating with each other so that there’ll be smoother traffic and less congested roads. 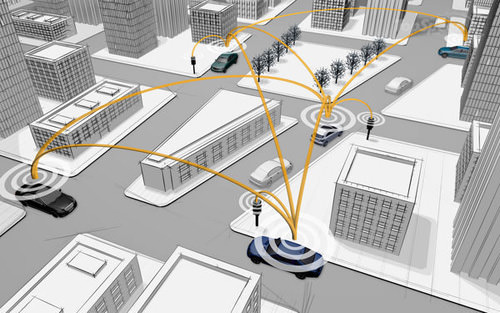 Another cool feature to have in a ‘smart’ car is to have it give you fuel efficiency tips or notifications while you’re driving. For example, it can notify you about a nearby gas station that has cheap gas prices; so even if you still have half a tank of fuel left, it’ll suggest that you refill now to avoid paying more at another gas station when you eventually run out of fuel. 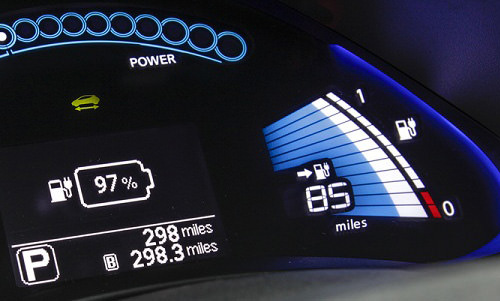 Honda is taking a pioneering step by integrating Apple’s Siri Eyes Free into their upcoming car models. That would basically allow you to use iOS from the dashboard of your car, letting you easily and safely make phone calls, access music, send and receive messages, and get directions using built-in Apple apps. 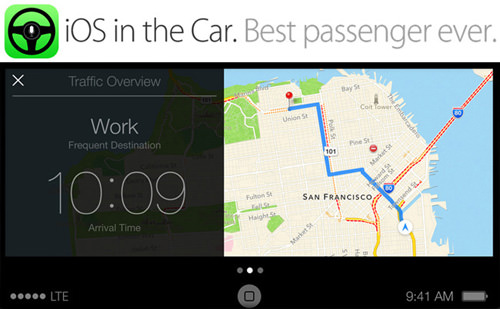 Meanwhile, there isn’t that much going on as far as integrating Android into cars is concerned. Although Android users can get lots of functionality (Google Now, Maps) just by mounting their Android smartphones onto their car windscreens, it’ll definitely be nice to have an integrated system with the car dashboard that allows the use of buttons on the steering wheel.

As some of you may know, built-in GPS devices (in cars) work without needing Internet access. But wouldn’t it be great if we can get live traffic updates on top of the usual GPS navigation? To do that, however, an Internet connection would be required – something that many cars still don’t have support for. 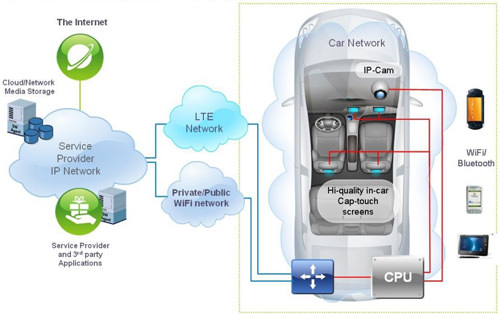 Here’s the good news: some car manufacturers like Audi have already made plans to implement Long Term Evolution (LTE) in their future car models. LTE would allow for better quality internet radio, searching for a location using pictures and faster loading of live maps. Having a dedicated LTE connection in a car can also turn the car into a Wi-Fi hotspot for people on laptops who are constantly on the go.

Self-healing paint has been around for some time now, but somehow hasn’t been implemented in consumer cars yet. Whatever the case may be, this is one cool technology – surface scratches will magically disappear after just a few minutes and your car will look like how it once was. 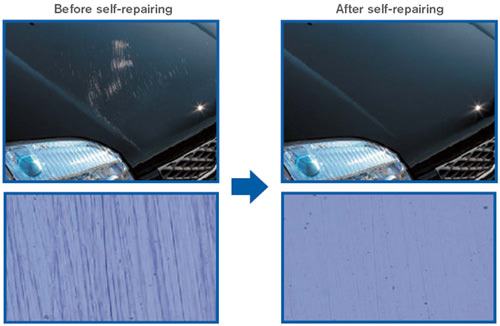 Truth be told, deep scratches won’t be 100% gone and some may still be visible if you look hard enough, but from a distance the car will still look as good as new.

Technological advancements have certainly surpassed our expectations of what can be integrated into cars. However, some of these advanced features we have looked at may come with hefty price tags. Nonetheless, we can still hope for a time where technology becomes more efficient and cheaper, allowing for all these cool and futuristic features to be implemented in cars of every price range.