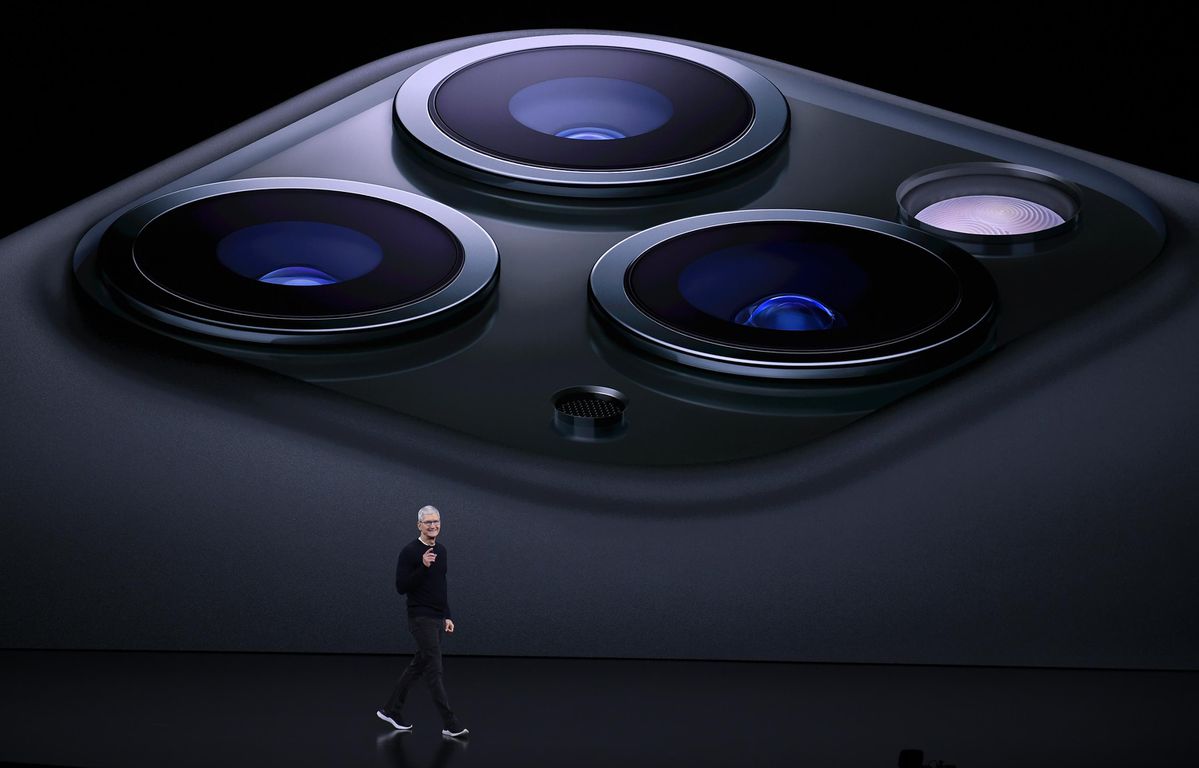 Taking a look back at another week of news and headlines from Cupertino, this week’s Apple Loop includes new iPhone 12 design leaks, folding the iPhone camera, your mostly dead MacBook and MacOS’ future, fun with Apple charts, new iPad Air pricing, the success of the iPhone SE, Apple’s carbon-free aluminium, and recreating the Big Sur wallpaper…

Tucked away in the latest beta of iOS 14’s accessibility tools is the latest leak around the iPhone 12 family. It’s not an obvious leak in the same way as having a graphic of the phone show up, but it’s a leak nonetheless, because of how the code is implemented.

“Thanks to some superb detective work by 9to5Mac, Apple’s plan to release its smallest ever, bezel-less iPhone has just been uncovered in its new iOS 14 beta release. And it is the evolution of a six year old software feature in iOS 14 which gives the game away.

“The culprit is ‘Display Zoom’, an accessibility tool which allows users to enlarge the user interface to make text, icons and buttons easier to see. How Apple achieves this is actually a hack: each iPhone simply displays the interface of the next smallest model with the same aspect ratio.”

Which, in its own way, confirms the smaller 5.4 inch iPhone 12. More here on Forbes.

July 27 update: Over the weekend a closer look at the iPhone 12 screens was posted on Weibo. The pictures, presumably from the manufacturing lines, show the pre-packed screens ahead of the iPhone assembly process. The assumption is that these screens are the 5.4 inch variety. Tim Hardwick reports:

“At first blush, the panels seem to have the same notch size as the iPhone 11, but an improved screen to bezel ratio, although it’s possible this could just be down to their pre-assembly appearance.

“That said, despite the hand in the image, it’s not immediately obvious from the photos which size of ‌iPhone 12‌ that the panels are supposed to be destined for. Weibo blogger Digital Chat Station claims they are for the 5.4-inch model, which could suggest we’re looking at a smaller notch than the one on the 5.8-inch ‌iPhone 11‌.”

Although the broad specs of the screen have been leaked and discussed, there’s still some question over the position and size of the notch on the flat-screened iPhone 12 models. The question now is which data point is represented by the leaked images.

Apple’s designers are naturally looking further down the line than this September’s iPhone 12. And naturally the camera is going to be used to show Apple’s technological prowess. The latest report from noted analyst Ming-Chi Kuo highlights the potential use of a ‘periscope’ zoom lens in 2021’s iPhone:

“Periscope cameras (sometimes called folded optics) are already in a number of high-end smartphones, such as Huawei’s P30 Pro launched last year. Through the use of mirrors, the path of the incoming light can be bent, allowing the periscope lens to be both longer and orientated in a different direction – the obvious benefit here is to have the sensor beside the lens, rather than directly behind the lens.

“… a longer lens will demand more internal space, if you are looking for larger levels of optical zoom something else is going to need to be sacrificed, such as battery volume.”

The Lifespan Of An Intel MacBook

With the transition of the MacOS platform to Apple’s own chips using the ARM architecture, what happens to the massive user-base of Intel powered machines. The switch to ARM will not be instantaneous, so your hardware is not dead. Even with Apple’s best intentions, the Intel MacBook is just mostly dead:

“MacOS on ARM has not appeared out of nowhere. Apple’s engineering team will have been working internally on this for many years, and some of the key third-party software will have been working with the the new architecture. The lack of ‘new’ features in MacOS over the last few years has left the MacBook range especially looking like Apple’s secondary team behind the iPhone and iPad families.

July 25 update: Lurking inside the latest MacOS beta is another illustration of where the Mac platform is heading, and how the Intel machines will be left behind. Biometric security is available on some Mac machines with the inclusion of Touch ID on a number of MacBook Pro machines. The latest beta of MacOS has code for the inclusion of FaceID, Apple’s 3D facial recognition system. Fossbytes’ Anmol Sachdeva reports:

“When Apple introduced FaceID biometric authentication technology in iPhone X, a code snippet with the project’s internal name as “PearlCamera” was found in the iOS update and now developers have found references to “PearlCamera” in macOS Big Sur Developer Beta 3…

“However, the project is in its early stage of implementation and Apple might take some time before adding FaceID in MacBooks.”

Thanks to the use of the True Depth camera to capture the face, this is not going to be available on any of the current Intel machines. Given the two-year window to move to ARM, there’s every chance that FaceID on MacOS will only be available on ARM machines.

An Apple Chart With A Message

What does Apple’s shiny chart from WWDC mean? It’s quietly contrasting Intel and AMD chips with Apple’s upcoming chips for the Mac platform, but is there a unique message in here? Jason Snell has some “Fun With Charts”:

“On one level, it’s a meaningless bit of marketing fluff. There are no labels. The vast breadth of notebooks and desktop PCs is represented by two perfect rounded rectangles. “Macs with Apple Silicon” are represented by a fuzzy gradient of squares. What does it mean?

“It’s a question that won’t be answered until after the Betas of Summer have gone. It’ll be a while before we get a clear picture of what the first Macs of this new era will look like. We don’t have a lot to go on… but there is this chart.”

Your Next iPad Will Be Cheaper

More news from the supply chain, this time on the upcoming refresh to the iPad Air lineup. It’s the welcome combination of more power for less dollars. Alex Alderson reports:

The Success Of The iPhone SE

Apple, like many manufacturers, is facing lower sales due to the impact of the coronavirus pandemic. With sales down 23 percent according to Coutnerpoint Research, the new iPhone SE is standing out. Launched in April, the mid-range iOS smartphone is performing ahead of expectations. Juli Clover reports:

With a commitment to making the whole company carbon-netural by 2030, Apple continues to use its scale to promote environmental issues and its own impact. Alex Hern reports:

“The majority of the progress, Apple says in its 2020 environmental progress report, will be made by cutting its carbon emissions directly. But the last 25% will come from “carbon removal solutions” such as forest planting and mangrove swamp restoration.

“The company is investing some of a recently announced $100m (£78.5m) fund for a racial equity and justice initiative on minority-owned businesses that can help clean up its supply chain. “Systemic racism and climate change are not separate issues and they will not abide separate solutions,” said Lisa Jackson, Apple’s environmental lead.”

More at The Guardian. As part of the commitment, Apple confirmed that it will start using low-carbon aluminum as an intermediate step towards a carbon-red smelting process. The first consumer hardware to benefit from this will be the 16-inch MacBook Pro:

“For the moment, this MacBook Pro will be unique, but it will be joined in time by the rest of the MacBook range, then the Mac family, before the new aluminium will be found in every Apple product. It’s not an immediate switch over and it may not have a cut-of date of ‘before and after’, so there’s no way or a consumer to specify that it wants the newer materials. Instead they need to be content with the knowledge of Apple’s march forward.”

More on that, here on Forbes.

With the move to MacOS 11 Big Sur, Apple has a new default wallpaper. How easy would it be for Andrew Levitt and his friends to capture the same image in under seven days. One thing is or sure, it’s clear that Craig Federighi is camping out in Levitt’s head.

Apple iPhone 12 to have wireless charging with magnetic attachment