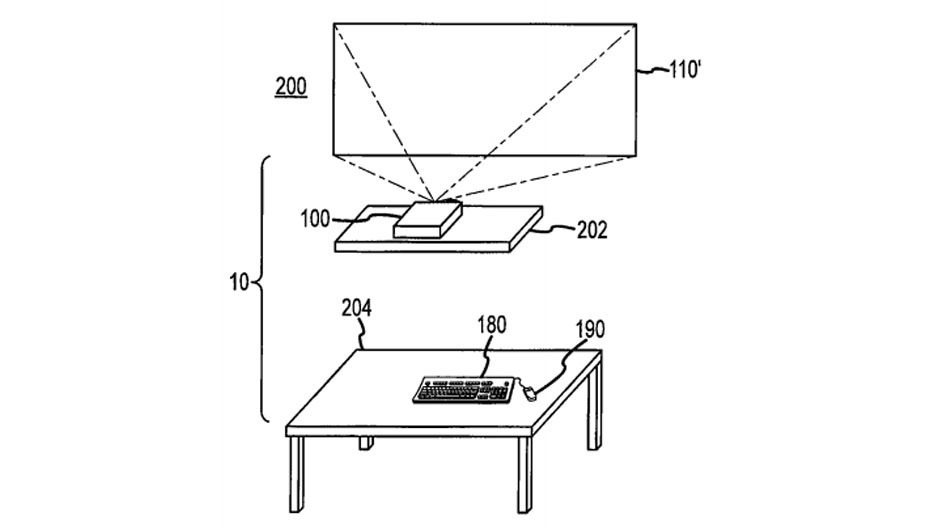 The innovations that regularly emerge from Apple’s Cuptertino research labs generally present something of a surprise to tech insiders as well as the general public. But sometimes an early patent filing can offer a clue as to exactly what Apple is thinking in terms of the long-term direction of mainstream computing.

Our latest clue regarding the future of hardware at Apple comes via a patent awarded on Dec. 17 that describes a “desk-free computer.”

Based on the description of the device, along with the drawings accompanying the patent filing, the device would likely resemble a Mac mini with a projector lens on one of its sides. Also included in the device would be an accelerometer and a proximity sensor to detect the device’s distance from a wall surface, upon which an image would be projected.

Explaining the logic behind creating a kind of laptop-meets-Mac-mini-meets-projector, the patent states:

The integrated projector may also provide flexibility in the location, relative to the computer system and/or the user, and/or in the size of the projected image. Display screens for both laptops and desktops are fixed in size, and have limited flexibility in location relative to the computer, either by wired connection and/or other physical constraint.

In addition to presenting a revolutionary approach to the standard computing model, the device would also include a technology that is increasingly popular in relation to powering mobile devices: inductive charging.

That method of wireless charging would mean that the computing device would not only be display-free, but it would also be able to function as a mobile solution, significantly cutting down the number of inputs and wires normally associated with mobile devices.

As with many Apple patent filings, there’s no indication as to when, or even if, this imagined device will ever become a reality and reach the commercial market.

But for those who continue to wonder about the oft-rumored Apple smart television, this new patent could offer a peak at the true shape of the company’s future display-centric offerings.

You are a node in the net, whether you know it or not