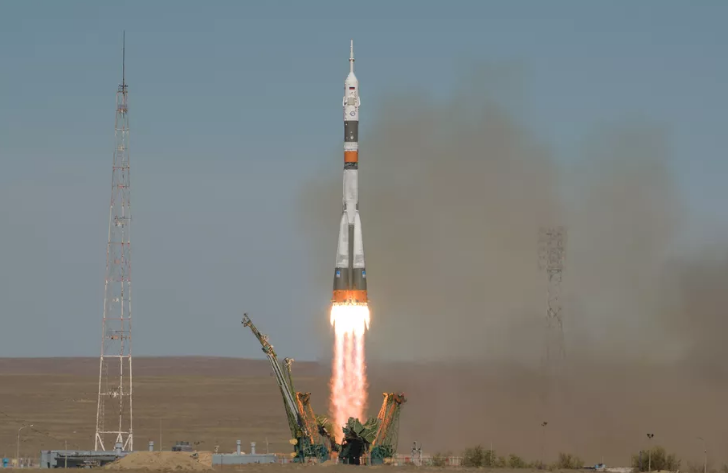 A NASA astronaut and Russian cosmonaut had to make an emergency landing on Earth this morning, after the Russian Soyuz rocket carrying them into orbit experienced a failure during launch. The two crew members — astronaut Nick Hague and cosmonaut Alexey Ovchinin — safely landed on the ground in Kazakhstan less than an hour after liftoff and are in “good condition,” according to NASA.

The crew took off from the Baikonur Cosmodrome in Kazakhstan at 4:40AM ET. A few minutes after launch, Russia’s state space corporation Roscosmos said that there was a problem with the booster during the flight. The failure prompted the crew to make a ballistic reentry, when the Soyuz capsule enters Earth’s atmosphere at a steeper angle than normal. Rescue teams have reached the landing site and the crew is out of the Soyuz capsule.

Ballistic reentries can be intense for astronauts, because they experience higher G forces. With a normal Soyuz landing, crews riding in the vehicle usually pull around 4 Gs. That can double for ballistic reentries. In 2008, a Soyuz experienced a malfunction during landing, prompting a ballistic reentry that reached up to 8 Gs. “I saw 8.2 G’s on the meter and it was pretty, pretty dramatic,” former NASA astronaut Pegg Whitson, who was on the flight, said in a statement, according to Wired. “Gravity’s not really my friend right now and 8 G’s was especially not my friend. But it didn’t last too long.”

Roscosmos has announced that it is forming a state commission to investigate the failure. The Russian state corporation says it is already studying the data from the launch. However, Roscosmos said it would not hold a press conference today.

The failure could have significant repercussions for NASA’s human spaceflight program moving forward. It’s unlikely that Russia will launch a crewed Soyuz mission until it has figured out what exactly went wrong during this flight. However, the Soyuz is NASA’s only means of getting astronauts to the International Space Station at the moment. Two private US companies — SpaceX and Boeing — are developing vehicles to ferry NASA astronauts to and from the ISS as part of the Commercial Crew Program. However, the first crewed flights of that program are not slated to occur until summer next year at the earliest.

UBER’S NEXT CONQUEST: YOUR DATA