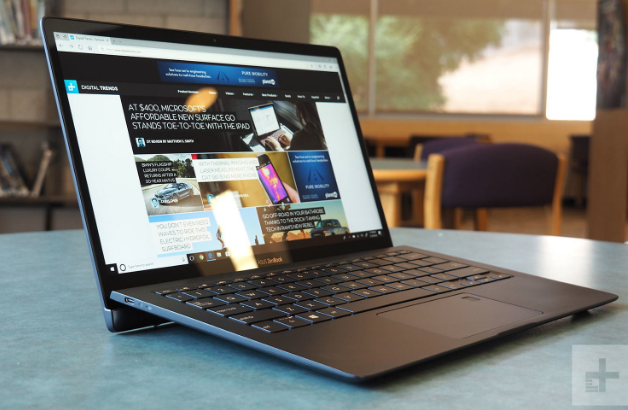 After years of Windows manufacturers striving to create viable notebook challengers to the extremely thin and light Apple MacBook, they’ve finally succeeded. Today, you can find some excellent Windows 10 notebooks that are both small and superior, offering great performance, build quality, and battery life without compromise.

The Dell XPS 13 is one of the best examples, and it’s been our favorite 13-inch notebook for some time now. Asus just recently introduced its newest competitor, the ZenBook S, which hopes to leverage some innovative technology to take on the class leader. Can the ZenBook S dethrone the XPS 13?

Dell’s XPS 13 received a significant update in early 2018, shaving off some millimeters from both the bezels and the chassis. The result? It’s now pretty much the smallest 13.3-inch notebook around, and thanks to some new materials — like Gore insulation — it still manages to perform without melting down.

It’s also a great looking design, with a new white and rose gold color scheme that adds some style to an otherwise conservative look. The new version uses a woven texture material in the palmrests and keyboard deck that offers a luxuriant feel.

The Asus ZenBook S is the company’s newest thin and light notebook, and it’s a chip off the same block in its aesthetics. It sports that usual ZenBook concentric swirls and dark blue color scheme — Burgundy Red is also an option — in an all-aluminum build that Asus subjected to MIL-STD-810G testing for durability. It shows, with a chassis that’s nearly impervious to bends and twists.

Asus also took a different tack than Dell to keep heat away from your skin. Where the XPS 13 uses the aforementioned Gore insulation, the ZenBook S simply props the keyboard up at a 5.5 degree angle with its ErgoLift hinge, and it works as intended.

Both notebooks offer relatively shallow keyboards that still manage to provide snappy, precise typing experiences, along with Microsoft Precision touchpads that work as well as any you’ll find on a Windows notebook. And both machines use accurate fingerprint readers for Windows 10 Hello support, although the XPS 13 can also log you in via facial recognition.

Overall, we found the ZenBook S to have a slightly favorable build, keyboard, and overall aesthetic.

Both the XPS 13 and the ZenBook S can be equipped with fast and efficient 8th-generation Intel Core CPUs. Unsurprisingly, they both provided acceptable performance. We tested both with the Core i7-8550U, and the XPS 13 managed to keep its processor running at full speed for longer than the Asus in our video encoding test thanks to its better thermals. Because of their fast PCIe solid-state drives (SSDs), though, these two tiny notebooks were both storage speedsters that can feed the system with data at a fast clip.

We tested the ZenBook S with its 4K UHD display (3,840 x 2,160 or 331 PPI), and we found it offers average color gamut for premium notebooks today — which is to say, good but not great. Dell equipped with XPS 13 with a 4K UHD option that offers a wider color gamut than the ZenBook S but slightly less contrast. Both are excellent displays, perfect for Netflix-watching and for displaying sharp text and graphics.

You can configure either notebook with a Full HD display (1,920 x 1,080 or 167 PPI) as well, although Asus offers this display only with a lesser Core i5-8250U CPU. Meanwhile, Dell drops the touch display on the lower resolution panel.

The Dell XPS 13 is a thin notebook at 0.45 inches — and thanks to its ultra-thin bezels, it’s also diminutive in its other dimensions. In fact, it’s the smallest 13.3-inch notebook on the market if you consider its depth and width. It’s a dense little notebook, though, coming in at 2.68 pounds — that’s not exactly heavy, but it’s not as light as some other thin-and-light machines.

For example, the ZenBook S comes in at 2.2 pounds, which is considerably lighter. However, its bezels are a bit bigger in all dimensions — although it keeps the webcam above the display, unlike the XPS 13 with its up-the-nose videoconferencing — and it’s not as thin at 0.51 inches. It’s quibbling at this point, but all of that makes the Asus just slightly less tiny.

Where the XPS 13 wins out, though, is in battery life. In all of our tests, including an aggressive web benchmark, web browsing, and looping a local video, the Dell lasted considerably longer than the Asus. That’s thanks to a slightly larger battery but also some efficiency magic on Dell’s part.

You won’t mind slipping either of these thin and light notebooks in your backpack, but you’ll be less tempted to carry your power adapter along if you’re toting the XPS 13around with you.

In the end, we liked both of the notebooks quite a lot, and we consider them among the best little notebooks money can buy. The Dell XPS 13 wins out, though, for providing better performance and better battery life in such a tiny chassis.