Last week, Asus France eShop had listed four ZenFone 4 models on its website, revealing the key specs, as well as press, renders of the devices. However, the flagship ZenFone 4 Pro wasn’t listed by Asus France. Leakster Roland Quandt, in a new tweet, has revealed the key specs of the ZenFone 4 Pro US variant, although we do expect the international variant to be nearly identical in terms of key specs.

According to the leakster, ZenFone 4 Pro (ZS551KL) will feature a 5.5-inch display with 1080 x 1920 Full HD resolution. It will be running on the octa-core Qualcomm Snapdragon 835 octa-core SoC, paired with 6GB of RAM. While 6GB of RAM is no doubt very impressive, it is still behind the Asus ZenFone AR that comes with a whopping 8GB of RAM. In terms of storage, the smartphone will include 64GB of onboard memory, with a microSD card slot for further expansion. In terms of connectivity, the ZenFone 4 Pro US variant will offer dual-band 802.11ac Wi-Fi, Bluetooth 4.2 Low Energy, and NFC. The battery inside the flagship ZenFone 4 model will be a 3,600mAh unit. Even though it hasn’t been confirmed by Quandt, we do expect to see fast charging support as well. On the software front, it will be running on the Android 7.1 Nougat operating system out of the box, with the Zen UI layer on top. 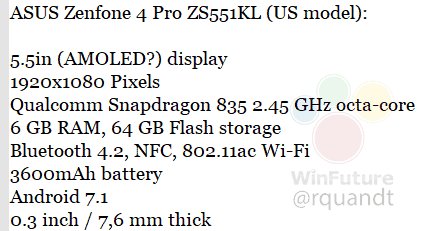 Anker announces its own $35 version of the Echo Dot