BBM to Soon Get Timed Messages and Retraction Features
Advertisement 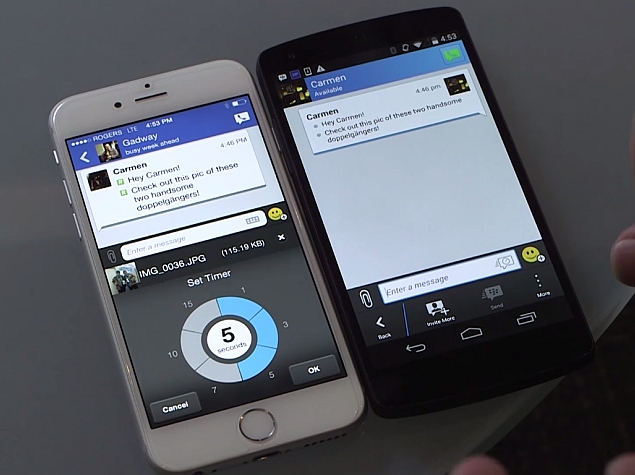 BlackBerry on Friday unveiled two new features for its popular messaging chat application, BlackBerry Messenger, offering users greater control on messages and images shared while chatting in the app. The features are currently available BBM Beta users on Android and BB10, and will be rolled out to the general release version 2.5 of the apps for Android, BB10 and iOS “very, very soon.”

The ‘Timed Messages’ feature as the name suggests lets users set a timer on a text or image chat up to 15 seconds. The message remains hidden until the recipient long-presses the message, and will remain until the timer expires, or the recipient takes their finger off the screen).

For sending timed messages, BlackBerry Messenger users would have to type the message (or choose the image in case of sending photos) and tap on the timer icon placed next to the text bar. The users will then be able to select the timer duration.

Also, if the recipient tries to take a screenshot of the timed text or image, the sender would be notified. “Oh, and don’t get any smart ideas about screen shots… if a screen shot is detected, the sender is notified,” added Jeff Gadway, Head of Product and Brand Marketing for BBM on the company’s blog post.

The ‘Message Retraction’ feature enables the sender to retract or delete a message from a BBM chat. The feature is specially made for those situations when a sender accidentally sends a message to a wrong person. Unfortunately, the feature only works on text messages and in one-on-one chats, and BlackBerry notes the recipient could have made copies or forwarded the message.

To retract a particular BBM chat message, users can simply tap and hold on the message and click on the ‘retract icon’ appearing on the right side of the screen to delete it from the chat thread.