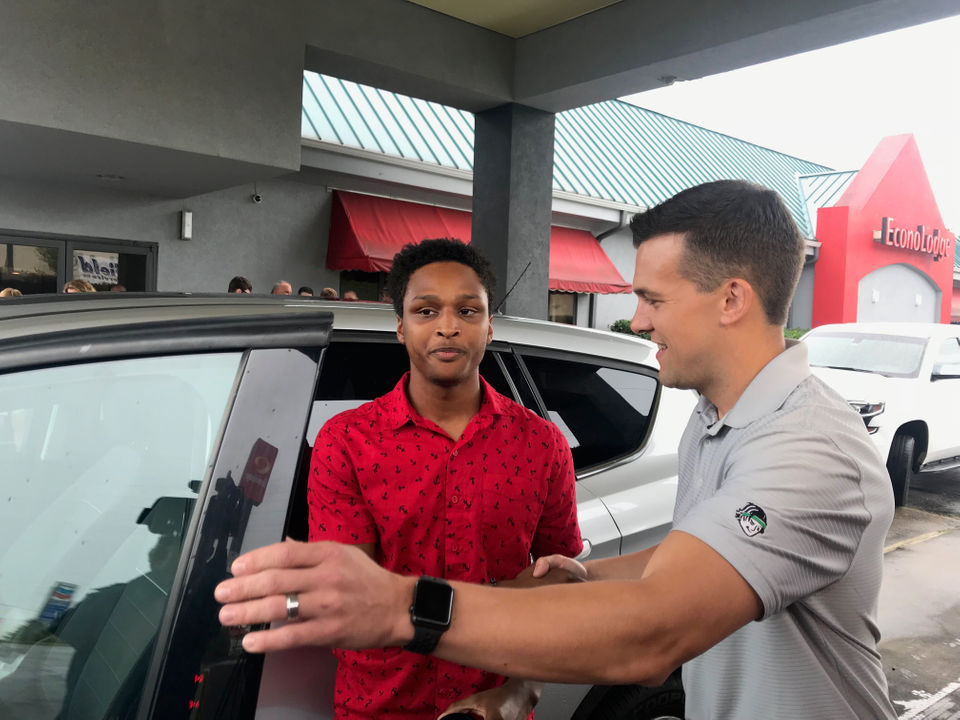 When a young Birmingham college student’s car broke down the night before he was supposed to start a new job, he didn’t panic. At least not for long.

Instead, Walter Carr walked. From Homewood to Pelham. All night. In the dark. 20 miles or more.

A Carver High School graduate and U.S. Marine hopeful, Carr walked throughout the early morning hours Friday because he needed, and wanted, the job with Bellhops moving company. He made it to Hoover by 2 a.m. and then to Pelham at 4 a.m.

It was in Pelham that the trek took a surprising turn. Kindness and concern from four Pelham police officers coupled with publicly-posted words of amazement and admiration from the moving company’s clients about Carr’s work ethic and dedication, led to a massive pat on the back Monday from Bellhops CEO Luke Marklin.

Marklin drove in from Tennessee under the guise of meeting Carr for coffee to personally thank him. That meeting ended with Marklin surprising Carr by giving Carr his own barely-driven 2014 Ford Escape.

“I am honestly blown away by him,” Marklin said of Carr. “Everything he did that day is exactly who we are – heart and grit. So far, he’s batting 1,000.”

An emotional Carr had just one word when Marklin handed him the keys. “Seriously?”

All the accolades over the weekend started with a post from Jenny Lamey on Facebook. She wrote that she and her husband, Chris, got up about 5:45 a.m. Friday to get everything staged and ready for the movers. About 6:30 a.m. their doorbell rang and the Lameys found Pelham police officers at their door.

“He proceeded to tell us that he had picked up ‘this nice kid’ in Pelham early this morning. The nice kid, Walter, said that he was supposed to help us with our move today. It was his first day on the job with this moving company (Bellhops) and he was ‘training’ today,” Jenny Lamey wrote Saturday night.

The officer then told the Lameys about Carr’s perseverance in getting to work.

“He WALKED ALL NIGHT to get from Homewood to Pelham. Because he needed to get to work. For those reading this that are not local, that’s over 20 miles. You could tell how the officer told us this story that he had complete admiration for Walter and by my reaction he could tell I did too,” she wrote. “The police officer said they picked him up earlier that morning, took him to get some breakfast and once they checked his story out, brought Walter to our house.”

Jenny Lamey said Carr was welcome to stay until the rest of the Bellhops crew arrived, and even offered him the chance to go upstairs and take a nap until then. He declined and said he could go ahead and get started. So, he began alongside the Lameys until the crews got there.

“We chatted while we were working together early yesterday morning. He loved my kitchen and said that it was exactly the kind of kitchen he would want. He was from New Orleans. He and his mother lost their home in Hurricane Katrina and they came and made their home in Birmingham,” she wrote. “I asked him if he was tired from all that walking, and he said replied that he wasn’t and that he had a 4-hour nap before he left at midnight. He said he made it (to) Hoover around 2 a.m. and then to Pelham around 4am, that’s about when the officer picked him up and took him to get breakfast. He wore black Nike joggers which he commented that he intentionally wore because he knew he had to walk thru (sic) some pretty high grass on his middle-of-the-night trek,” she wrote. “He looked at me in the eye and smiled and I felt like I had known him much longer.”

Jenny Lamey also praised the rest of the moving crew, but it was clear Carr left an impression on her. She has set up a GoFundMe account to help him out.

“I just can’t tell you how touched I was by Walter and his journey. He is humble and kind and cheerful and he had big dreams! He is hardworking and tough. I can’t imagine how many times on that lonely walk down 280 in the middle of the night did he want to turn back,” she wrote. “How many times did he wonder if this was the best idea. How many times did he want to find a place to sit or lie down and wait til morning when he could maybe get someone to come pick him up and bring him back home. But he walked until he got here! I am in total awe of this young man!”

She said she made Carr tell his co-workers of his ordeal. “Walter said, ‘I walked.’ That was it. Humble. I asked him to share a little more and when he did, the crew was in awe of him too,” she wrote. “I don’t know that Walter would have shared if I hadn’t asked him to.”

Pelham police officer Mark Knighten was the first to encounter Walter that morning. Because it was 3 a.m., and he was walking on the side of the roadway, Knighten stopped to ask Carr if everything was OK. Carr explained to him that he was walking to work, and why, and Knighten took action.

Knighten, along with officers Klint Rhodes and Carl Perkinson then took Carr to Whataburger, where they not only bought him breakfast but told him to get lunch to go as well.

Because it was still so early, Knighten said they took Carr to a church because that was the safest place to leave him until it was time for him to be at work.

Officer Scott Duffey was just coming on the clock and his fellow officers told them about their morning. Duffey then went in search of Carr who had already left the church to walk to his job assignment, which was almost in Chelsea.

Duffey picked him and drove him to the Lamey’s house, where he knocked on the door and explained the situation.

Carr plans to graduate from Lawson State in December with an associate’s degree in health sciences. He wants to join the U.S. Marines and then come back to Birmingham to get his bachelor’s degree in physical therapy.

Carr said he is so thankful for all who stepped in. “This was the first job in a long time to give me an opportunity to get hired,” he said. “I wanted to show them I got the dedication. I said I’m going to get to this job one way or another.”

“I want people to know this – no matter what the challenge is, you can break through the challenge. Nothing is impossible unless you make it impossible,” he said. “You can do anything you set your mind to. I’ve got God by my side. I’m really emotional right now trying to hold back the tears.”

Carr said his mother and father raised him to help others, and he plans to use his new car to do just that. “To my parents, thank you for being there for me, for the hard work and dedication they put in to keep me on the right path,” he said. “And I want to thank God because without Him I wouldn’t be here.”

“God blessed me to be a blessing,” he said. “Whatever challenges God puts in front of me I know its for a reason.”

Jenny Lamey also was emotional on Monday. She hugged Carr tightly and told him this: “You’ve changed all of our lives Walter. You have no idea how many lives you’ve changed and inspired. You’re a very special young man and you’re going to do great things. You already are.”

Like Loading...
Related Topics:BIRMINGHAM COLLEGE STUDENT WALKED 20 MILES TO 1ST DAY OF WORK SO HIS BOSS GAVE HIM HIS CARfeatured
Up Next

MOST OF AI’S BUSINESS USES WILL BE IN TWO AREAS