BlackBerry ‘Disappointed’ in Results as It Pursues Sale
Advertisement 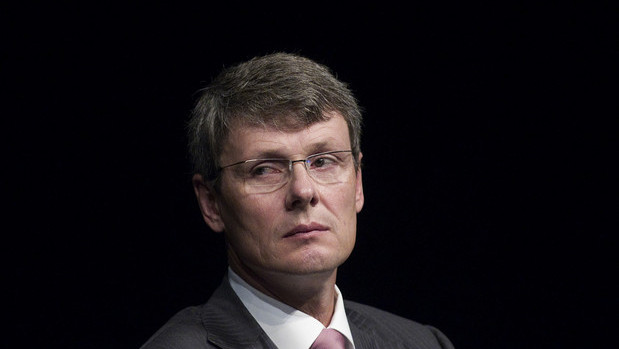 BlackBerry Ltd. Chief Executive Officer Thorsten Heins said, “We are very disappointed with our operational and financial results this quarter and have announced a series of major changes to address the competitive hardware environment and our cost structure.”

The company released a more complete financial report this morning following a preliminary statement a week ago that didn’t provide regional breakdowns. Sales in the Americas, an area the company once dominated, fell faster than anywhere else, tumbling 56 percent to $610 million.

The report fleshed out last week’s figures, which showed a wider loss and an unexpectedly sharp revenue decline. The company also is taking a pretax writedown of $934 million for unsold phones and cut 4,500 jobs, or about a third of its workforce. BlackBerry said today that it would have $72 million in pretax expenses for restructuring.

“We are very disappointed with our operational and financial results this quarter and have announced a series of major changes to address the competitive hardware environment and our cost structure,” Heins said in today’s statement.

Heins is working to slash costs after and refocus on just it business customers after a tepid response to the new BlackBerry 10 lineup released this year. By going private, the company aims to tackle its challenges outside the glare of public markets. Fairfax Financial Holdings Ltd. (FFH), BlackBerry’s largest investor, said on Sept. 23 that it had signed a tentative offer to purchase the company with help from other partners. The firm hasn’t identified the other buyers.

“Given that Fairfax is currently looking to build a consortium, we see the risk of a bidding war breaking out for BlackBerry is low, particularly given what we view are favorable terms to Fairfax,” said Colin Gillis, an analyst with BGC Partners LP (BGCP) in New York.

Investors remain skeptical about the deal, with the stock trading below Fairfax’s offer price of $9 a share. BlackBerry rose 1 percent to $8.03 at the close in New York.

BlackBerry said today that it had a loss last quarter of 47 cents a share from continuing operations, excluding one-time costs. Last week, it said the loss would be 47 cents to 51 cents a share. While the final number is at the low end of that range, it’s still almost three times the size of the 16-cent loss originally predicted by analysts, according to data compiled by Bloomberg.

Total sales fell 45 percent to $1.57 billion, a little lower than the figure of $1.6 billion that BlackBerry gave last week. Analysts had estimated $3.03 billion.

Suppliers, corporate customers and wireless carriers have begun to loosen ties to the once-dominant smartphone company. Jabil Circuit Inc. (JBL), an electronics supplier whose second-largest customer is BlackBerry, said this week it will probably disengage from that relationship in the coming months.

That’s a sign the smartphone company’s device business is shrinking, Peter Misek, an analyst at Jefferies Group LLC in New York, said in a report yesterday.

“BlackBerry’s ongoing handset business will be much smaller and could even disappear,” said Misek, who has a hold rating on the shares.

The Jabil comments followed a move by T-Mobile US Inc. (TMUS), the fourth-largest U.S. carrier, to begin removing BlackBerry inventory from its stores. While display models of the phones will still be on view, customers will have to get inventory shipped to them directly, T-Mobile said.

Longtime customers such as Morgan Stanley (MS) are holding off on committing to new devices, people familiar with the matter have said. UBS AG (UBSN), the world’s biggest wealth-management firm, also has yet to make the upgrade. It’s running a BlackBerry 10 pilot project to determine whether to move to the new platform.

Credit Suisse Group AG (CSGN), Switzerland’s second-biggest bank, has decided against adopting BlackBerry 10 for now, the company said in a statement. The lack of its compatibility with BlackBerry’s earlier platforms, the “dwindling albeit loyal population of BlackBerry users, and concerns about long-term viability, are causing us to pause and wait and see on any upgrades,” the Zurich-based bank said.

Faced with these challenges, BlackBerry agreed this week to Fairfax’s tentative offer, one Heins has yet to discuss publicly. BlackBerry canceled its customary post-earnings conference call today, meaning investors won’t get a chance to quiz Heins and his team about the takeover plan.

Still, the company should push ahead with the Fairfax deal, given the dearth of other choices, said James Moorman, an analyst at S&P Capital IQ in New York.

“We think it will be its best option,” he said.

Disruptions: Visually Impaired Turn to Smartphones to See Their World