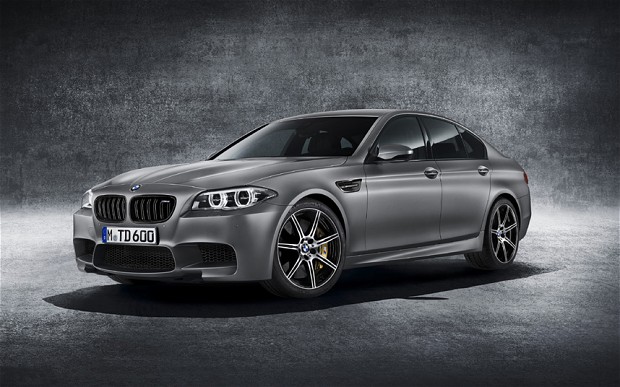 BMW celebrates 30 years of its M5 supercar saloon with a special edition boasting Aston acceleration and a price tag close to £100,000

BMW is celebrating the 30th birthday of its M5 hot-rod family saloon with a special edition that costs over £100,000 with options and accelerates faster than a V12 Aston Martin.

The M5 30 Jahre (30 year) Edition produces a mighty 596bhp from its twin-turbo V8, 40bhp more than the standard M5. That drops the 0-62mph sprint time to 3.9 seconds and pushes the car to a top speed of 199mph, making it the fastest BMW production car currently on sale.

The M5 has become a sporting icon for the sheer sledgehammer power extracted from the otherwise quite tame 5-series family saloon. The story began in 1984 with the M535i, which produced a now very modest sounding 218bhp from its 3.5-litre six-cylinder engine. Acceleration to 62mph took 7.2 seconds, almost double the time of the 30 Jahre model.

That was eventually boosted to 286bhp to created the first full-blooded M5 off the same E28 5-series, while the next-generation M5 from 1989 upped that again to 311bhp.