Clones of iPhone 6 appear ahead of official release
Advertisement 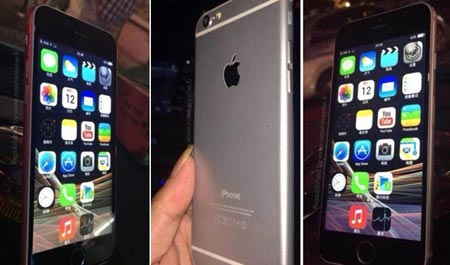 Chinese imitators have beaten Apple to the punch by launching clones of the highly anticipated iPhone 6 ahead of its official release date, reports our Chinese-language sister paper China Times.

While the world awaits Apple’s announcement of the release date of the iPhone 6, expected in September, Chinese manufacturers have already released a “shanzhai”–or knock-off–version based on alleged photographs of prototypes and the rumored specifications.

The shanzhai phone is believed to be a close replica of what the iPhone 6 will look like, from the metallic outer shell and touch ID fingerprint recognition feature to the 4.7-inch screen. The major difference is that the phone uses the Android operating system rather than Apple’s iOS, athough the knock-offs have even copied the iOS icons to make the systems appear nearly identical.

It is also not clear whether the shanzhai version includes wireless charging or near field communication (NFC) data exchange capabilities, which are rumored to be features of the real deal.

While the 4.7-inch version of the iPhone 6 appears ready for launch this year, the latest rumors on the AppleInsider website suggest that the 5.5-inch version of the smartphone may have encountered problems with its touch screen reliability and case coloring, meaning its launch could be delayed until next year. The iPhone 6 launch announcement is currently predicted for September 19 or 25.

Analysts believe the iPhone 6, with its larger screen(s), could potentially become Apple’s most popular phone, though there are also reports that many Apple users have been frustrated with the long wait and have switched to South Korean rival Samsung.

A report from the Guardian indicates that the smartphone market in China and Europe is growing much slower this year, while low-end Chinese smartphone maker Xiaomi’s rapid rise is starting to erode Apple’s market share.

According to a report from investment website Motley Fool, while China is the world’s largest smartphone market with a scale of 420 million units this year, Apple’s market share in the region is unlikely to have any further room for growth.

Microsoft ‘preparing biggest round of job cuts in five years’