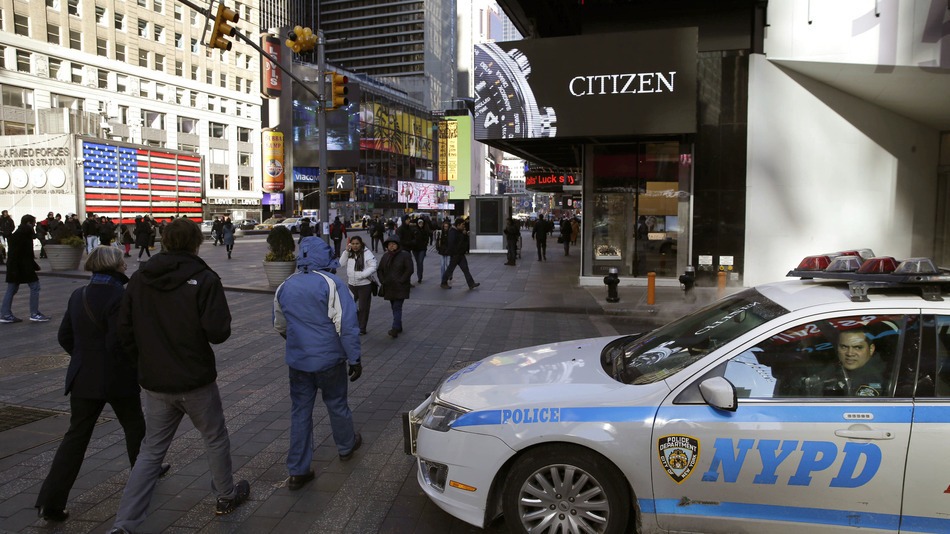 Law enforcement officials aren’t too happy with the Google-owned Waze app, which can be used to warn drivers when police are nearby.

At a meeting at a National Sheriffs Association conference earlier this month, a group of sheriffs raised concerns that the app can be used for “stalking” police officers.

Waze, a social traffic app available for iOS, Android and Windows devices, allows users to report on traffic jams, accidents and other commute problems. Users can also report the location of police officers and radar-based speed traps, which are highlighted with a police-officer icon on a map.

During the meeting, officers pointed to the Instagram account of a man who shot and killed two NYPD police officials in December, according to The Associated Press. The man posted a screenshot from Waze to Instagram with a caption that threatened police.

However, investigators don’t believe that the app was used for the attack. The shooter ditched his phone a couple of miles from the murder scene. and there is no official record of an assailant using Waze to ambush police.

“The police community needs to coordinate an effort to have the owner, Google, act like the responsible corporate citizen they have always been, and remove this feature from the application even before any litigation or statutory action,” said Sheriff Mike Brown of Bedford, Va., who also serves as the chairman of the National Sheriffs Association technology committee, according to the AP.

A National Sheriffs Association spokesman told Mashable that the organization has no official stance on Waze; this was just a concern that some members of the organization raised at itswinter conference, which was held in Washington, D.C., between Jan. 20 and 24. The meetings were coordinated with the Major County Sheriffs’ Association winter conference that runs Jan. 26 and 27 immediately after.It’s unclear whether Waze has had a widespread effect on how police officers go about their jobs. There’s no data, for example, to say whether traffic legal incidents have gone down because of the Waze app, which has 50 million users globally.

A Waze spokeswoman told Mashable that safety is a priority — and that the app works with local police forces, who often support the police-tracking feature because drivers tend to follow the law more strictly when they believe police are nearby. Here’s what they had to say:

“We think very deeply about safety and security and work in partnership with the NYPD and other Police and Departments of Transportation all over the world, sharing information on road incidents and closures to help municipalities better understand what’s happening in their cities in real time. These relationships keep citizens safe, promote faster emergency response and help alleviate traffic congestion.”

Google and Sheriff Mike Brown did not immediately respond to Mashable‘s request for comment.

Have something to add to this story? Share it in the comments.

SAMSUNG WATCH ACTIVE 2 SPECS IS ONLINE, While Samsung is gearing up to launch the Galaxy Note 10 series on August 7,

While Samsung is gearing up to launch the Galaxy Note 10 series on August 7, there are reports about the arrival of a Galaxy Watch Active 2. It’s unclear if whether the company will launch the wearable with the new smartphone series, or if its launch will be moved forward. Despite this, more and more leaks are surfacing and revealing details about the Watch Active 2.

A couple of pictures were revealed today by the popular leakster, Evan Blass, from evleaks. According to another report from SamMobile, the Galaxy Watch Active 2 will come in two sizes, 40mm and 44mm. The former has a 1.2-inch screen, while the latter will be equipped with a 1.4-inch display. Both displays will boast AMOLED technology plus Gorilla Glass DX+. Last but not least they’ll sport 360×360 pixels of resolution. Join GizChina on Telegram

The smaller model will weigh 31g, while the bigger one scales at 36g. They will arrive in either aluminum or stainless steel case, both are built to comply with MIL-STD 810G durability standards. According to reports, Samsung will equip the newer models with a touch-sensitive bezel. Therefore it will allow users to interact with functions without having to touch on the screen. That’s an interesting feature, after all, smartwatches displays are usually too small so it’s hard to interact with a touch-sensitive display without covering the content.

The Watch Active 2 will carry Samsung Exynos 9110 SoC underhood. The smartwatch boasts 768 MB of RAM on the Bluetooth-only model and 1.5GB on the LTE-capable variant. Both versions will boast 4GB of Internal Storage. Reportedly, the 40mm unit will have a  247 mAh battery. The 44mm model will fit a larger 340 mAh cell. As previously rumored, ECG and fall detection are both on board. However, the former can take some time to arrive at the shelves.

We may have already seen new MacBook Pro models refreshed for 2019, but the true MacBook Pro 2019 is expected to land this October as a 16-inch LCD laptop, according to Taiwan’s United Daily News (UDN).

Given that this would be Apple’s largest MacBook Pro laptop since 2012’s final run of the 17-inch MacBook Pro, the company reportedly plans to slap a gargantuan baseline price tag onto this year’s model – which could rise above $3,000 (about £2,450, AU$4,350).

This laptop will likely be pushed heavily toward content creators and developers as a demonstration of Apple’s sincerity in serving those audiences. Here’s to hoping it will somehow satisfy the cross-section of folks that also like to game on their workhorse machines.

MacBook Pro 2019 backs down from OLED

This report corroborates one published by London-based market analysts IHS Markit, adding the pricing element to the mix. More importantly, this is the second report to state that the 16-inch MacBook Pro 2019 display will not be an OLED product.

Instead, it will be an LCD to the tune of a 3,072 x 1,920 pixel resolution, which would give the display a rather competitive 226 pixels per inch (ppi) rating and a total of 5.9 million pixels. LCD or not, this is going to be a sharp 3K display.

Will that alone be enough to justify such an exorbitant starting price? Hardly. There are surely other features that Apple has cooking for this device.

We know that Apple is planning to allow this MacBook Pro up to 32GB of memory (RAM), which is already possible on the 15-inch MacBook Pro.

And, of course, every report mentions an entirely new design likely focused on smaller screen bezels.

Exactly what kind of processor technology will be inside these laptops is also up in the air. Is Apple’s supposed ARM laptop processor to be finished in time for these new laptops? Or, will Apple go all in with AMD considering Intel’s faltering pole position in the laptop computing space?

We’ll almost certainly see more about these missing MacBook Pro 2019 details as we get closer to October 2019.

Google pays users to help build its FaceID, Google’s Pixel 4’s moderately sized bezel has been rumoured to be hiding

Google’s Pixel 4’s moderately sized bezel has been rumoured to be hiding a powerful secret — its own take on FaceID. Much like how Pixel Imprint is Google’s version of TouchID, Google is expected to add an additional form of biometric authentication to the Pixel 4 and 4 XL with this year.

As per a report from ZDNet, men on the street have been approached by Google employees and asked to capture different angles of their face in exchange for a $5 Amazon or Starbucks Giftcard. The images were taken with a phone in a case which obscured its design likely the Pixel 4 or 4 XL (or a prototype of one or the other.)
The firm is said to be doing this for multiple sites across the US to gather a large number of pictures with which to train its Pixel’s authentication system before launch.

Google previously offered facial recognition for its Android devices in the past. This method is likely to be more secure and 3D based than before.