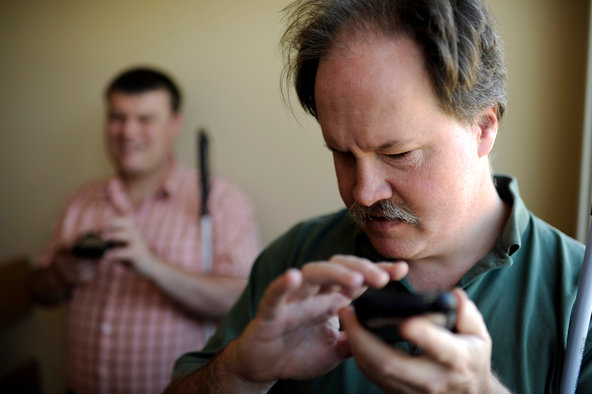 Luis Perez loves taking photographs. He shoots mostly on an iPhone, snapping gorgeous pictures of sunsets, vintage cars, old buildings and cute puppies. But when he arrives at a photo shoot, people are often startled when he pulls out a long white cane.

In addition to being a professional photographer, Mr. Perez is almost blind.

“With the iPhone I am able to use the same technology as everyone else, and having a product that doesn’t have a stigma that other technologies do has been really important to me,” said Mr. Perez, who is also an advocate for blind people and speaks regularly at conferences about the benefits of technology for people who cannot see. “Now, even if you’re blind, you can still take a photo.”

Smartphones and tablets, with their flat glass touch screens and nary a texture anywhere, may not seem like the best technological innovation for people who cannot see. But advocates for the blind say the devices could be the biggest assistive aid to come along since Braille was invented in the 1820s.

Counterintuitive? You bet. People with vision problems can use a smartphone’s voice commands to read or write. They can determine denominations of money using a camera app, figure out where they are using GPS and compass applications, and, like Mr. Perez, take photos.

Google’s latest releases of its Android operating systems have increased its assistive technologies, specifically with updates to TalkBack, a Google-made application that adds spoken, audible and vibration feedback to a smartphone. Windows phones also offer some voice commands, but they are fewer than either Google’s or Apple’s.

Among Apple’s features are ones that help people with vision problems take pictures. In assistive mode, for example, the phone can say how many heads are in a picture and where they are in the frame, so someone who is blind knows if the family photo she is about to take includes everyone.

All this has come as a delightful shock to most people with vision problems.

“We were sort of conditioned to believe that you can’t use a touch screen because you can’t see it,” said Dorrie Rush, the marketing director of accessible technology at Lighthouse International, a nonprofit vision education and rehabilitation center. “The belief was the tools for the visually impaired must have a tactile screen, which, it turns out, is completely untrue.”

Ms. Rush, who has a retinal disorder, said that before the smartphone, people who were visually impaired could use a flip-phone to make calls, but they could not read on the tiny two-inch screens. While the first version of the iPhone allowed people who were losing their vision to enlarge text, it wasn’t until 2009, when the company introduced accessibility features, that the device became a benefit to blind people.

While some companies might have altruistic goals in building products and services for people who have lost their sight, the number of people who need these products is growing.

About 10 million people in the United States are blind or partly blind, according to statistics from the American Foundation for the Blind. And some estimates predict that over the next 30 years, as the vast baby boomer generation ages, the number of adults with vision impairments could double.

Apple’s assistive technologies also include VoiceOver, which the company says is the world’s first “gesture-based screen reader” and lets blind people interact with their devices using multitouch gestures on the screen. For example, if you slide a finger around the phone’s surface, the iPhone will read aloud the name of each application.

In a reading app, like one for a newspaper, swiping two fingers down the screen will prompt the phone to read the text aloud. Taking two fingers and holding them an inch apart, then turning them in a circle like opening a padlock calls a slew of menus, including ones with the ability to change VoiceOver’s rate of speech or language.

On all the mobile platforms, people with vision loss say, the real magic lies in the hundreds of apps that are designed specifically to help people who are blind.

There are apps that can help people see colors, so pointing their phones at an object will yield a detailed audio description of the color, like “pale yellow green” or “fresh apricot.” People who are blind say these apps open up an entirely new way of seeing the world. Light detection apps can emit a sound that intensifies when someone approaches a light source. This can be used to help people find a room’s exit, locate a window or turn off a light. There are apps that read aloud e-mails, the weather, stock prices as well as Twitter and Facebook feeds.

In the United States, one of the biggest challenges for blind people is figuring out a bill’s denomination. While coins are different sizes, there is no such differentiation between a $1 bill and a $100 bill. In the past, people with impairments had someone who could see help them fold notes differently to know which was which, or they carried an expensive third-party device, but now apps that use the camera can identify the denomination aloud.

“Before a smartphone was accessible we had to carry six different things, and now all of those things are in one of those devices,” Ms. Rush said. “A $150 money reader is now a $1.99 app.”

She added: “These devices are a game-changer. They have created the era of inclusion.”

While some app makers have made great efforts to build products that help people with impairments, other developers overlook the importance of creating assistive components.

Mr. Perez said what he could do now with his smartphone was inconceivable just a few years ago. But even well-known apps like Instagram, which he uses to share some of his photos, do not mark all of their features.

“When some developers design their apps, they don’t label all of their buttons and controls, so the screen reader just says, ‘This is a button,’ but it doesn’t say what the button actually does,” Mr. Perez said. “That’s an area where we need a lot of improvement.”

BlackBerry ‘Disappointed’ in Results as It Pursues Sale

How to engage your LinkedIn followers