Facebook's new web layout is coming out, and random users are experiencing it
Advertisement 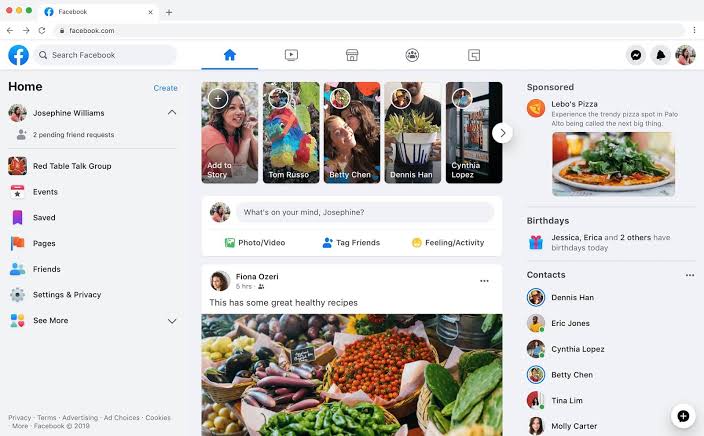 The Android application started getting the new layout designs with every new update, however, the website was supposed to get a new interface in the next few months.

Now it seems like the company is almost ready as Facebook is sending invitations to users for experiencing the new designs.

Over the past few days, many users got invited to use the new web interface.

The selection of the users is entirely random and doesn’t seem to follow any pattern.

Got the invitation to try Facebook’s new Desktop Design!

37:00 PM – Jan 6, 2020Twitter Ads info and privacySee Shahrukh Al Faisal’s other Tweets
According to Facebook, the new designs of the website aims to provide an experience similar to its app.

The new layout has a more easy to understand navigation menu, new icons, a more precise news feed, and it does give an overall modern look compared to the existing design.

Each tab will land you to a page dedicated for the feature for example pages, groups.

The new design helps the users to find more private spaces like groups and move from the public locations.

Facebook groups are one of the most active places on the platform where thousands of people come together who have common interests.

There are millions of active groups on Facebook, and since private spaces are becoming an influential part of most users life, it makes sense for the company to add dedicated tools to help users find new groups.

The dark mode is another major highlight in the new layout.

When a user accepts the invitation to using the new interface, they have to choose which layout [Normal or Dark Version] they would prefer.

Users can Turn on/off the dark mode from the option available in the quick settings.

According to App Annie, a company that analyzes mobile apps usage revealed that Facebook’s mobile app is the most downloaded Mobile Application of the decade, right before Fb Messenger, WhatsApp messenger and Instagram.

These aren’t only the most downloaded apps, but their usage time is also the highest compared to the other Android and iOS applications, App Annie further explained.

An interesting noticeable thing in the new layout is less use of color blue which Facebook has been using from the very start of the company.

The new interface is getting a positive review from early users except for some issues with the text visibility in the dark mode.

Facebook Messenger in Dark Mode, but no news on WhatsApp Dark Mode Update

WhatsApp users can be duped by fraudsters with QR code