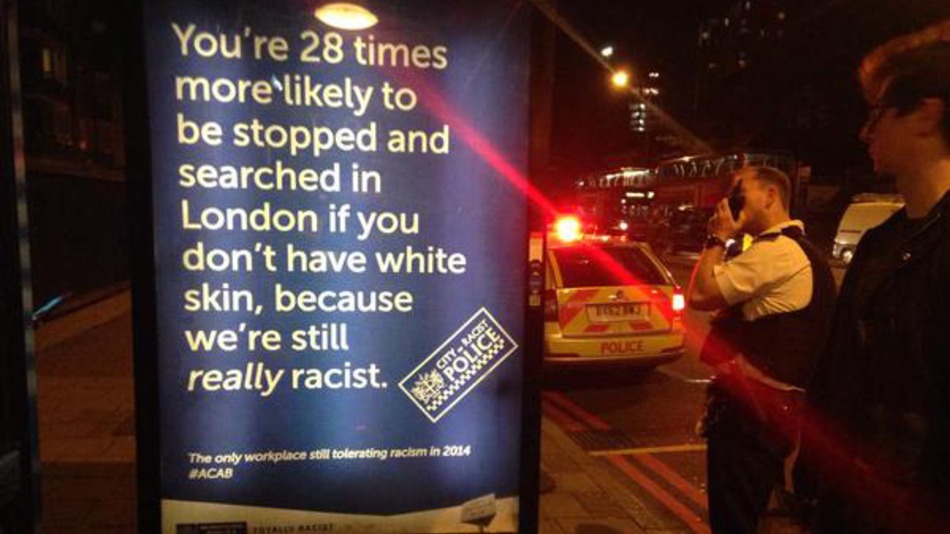 LONDON — A series of posters attacking the Metropolitan Police have appeared around the capital this weekend.

Adorning bus stops across London, they criticise the police force for their stance on drugs and the shooting of Mark Duggan in 2011, which led to widespread riots at the time. They also claim that the force is “racist” following the statistic that black people were more likely to be stopped and searched.

One was posted outside Scotland Yard, the headquarters of the Metropolitan Police.

“You’re 28 times more likely to be stopped and searched in London if you don’t have white skin, because we’re still really racist,” it read.
Another in south London focussed on the issue of drug legalisation, declaring: “We’ve pointlessly targeted cannabis users in Lewisham, while other people legally drink their drugs.”

In North London, a third referenced the police shooting of Mark Duggan which sparked unrestthree years ago. “We caused the 2011 riots by shooting dead an unarmed civilian and then lying about it. And we got away with it.”
The posters were created by anarchist magazine STRIKE!, who say they are an attempt to tackle “police propaganda.”

“The Metropolitan Police Force spend ridiculous sums of our money trying to convince us – and themselves – that they’re not violent, racist and corrupt,” their website insists. However theyclaimed they weren’t behind them going up around London.

The posters were fixed behind the glass but Clear Channel, who own the advertising space, told reporters that they aren’t part of an official campaign and will be removed.

‘On Sunday 14th December, we received information that some of our sites had been accessed and the advertising had been replaced by posters from an activist group,” they said. “Our Operations team are attending the sites throughout the night and are re-posting the advertising, in line with our standard practice.”

Best streaming services to keep you sane this Christmas