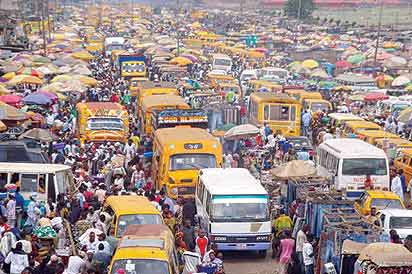 Lagos State Governor, Mr. Babatunde Fashola SAN, Thursday threw more light on the idea behind his administration’s innovative initiative, “A Day Without Horn In Lagos” coming up on October 15, 2014, describing it as a step towards sensitizing residents to the harmful effects of noise pollution.

Speaking at the State’s first “Lagos Drivers’ Appreciation Day” held at the Lagos Chamber of Commerce and Industry House, Alausa, Ikeja, venue of the event, Governor Fashola said the Horn free day was an initiative of his administration to persuade citizens that there is a better way to live than indulging in noise pollution which has been found to be harmful to their health.

The Governor said in pursuance of the efforts to reduce environmental pollution in the State his administration has thought up the initiative meant to sensitize Lagos residents to the dangers caused by noise pollution to their health and that of their neighbours and family members.

Re-enforcing the remarks of the Guest Lecturer who put the harmful noise level at 70 decibels and above, the Governor said there is need to come down significantly because according to the global standard for measuring noise, “90 decibels is rather too high and harmful to human health”.

According to him, “What we see in a way that we now choose to live is that because we live in a very noisy environment, which we can really diminish, we tend to be very noisy ourselves. We speak at the top of our voices, we play music at very high decibels and we do very many things at very high levels”.

The Governor pointed out that the campaign against noise pollution was a response to the petitions and complaints of “citizens and tax payers who, on daily basis, write and petition us that somebody is preventing them from sleep either from the noise they are making or from other uncharitable activities they are carrying on without regard for the wellbeing of their neighbours”.

Governor Fashola said the gathering also came from the challenge that he posed when Lagos State hosted the National Council on Transportation about a year ago during which he observed in his speech that in some other parts of the world, one could spend days on their roads and would  not hear any noise.

He further recalled, “Occasionally, when you hear a siren you know something has gone wrong in that system; you know that either an ambulance is on its way to an emergency or firemen are on their way to a fire or policemen are tracking and chasing criminals; and I said then that why should we be different, are we not Nigerians?”.

Saying that such a change should start from Lagos “the Centre of Excellence”, Governor Fashola expressed joy that the Ministry of Transportation and all her affiliated agencies, the Drivers’ Institutes, the Transport and the Law Enforcement Institutes, have all taken the challenge up to the level of implementation.

He declared, “We are gathered here today to sensitize ourselves in preparation for the day we have chosen as a Horn-Free Day; the No-Noise day or whatever you chose to call it, but let us just bring down the noise in our society. On that day we will not be gathering like this. Each one of us and all of us will be consciously doing something to start this very exciting journey in order to reduce noise in our society”.

Thanking the Guest Lecturer for her “very informative presentation” about the adverse effect of noise on the quality of life of human beings, on their well-being and on their health, Governor Fashola said reduction in noise pollution would clearly bring about  “better life, a healthier life and a more prosperous life”.

The Governor charged the audience, “I want you to remember as we leave here today that starting from the 15th of October, whether we reduce noise or not starts from you and I.  If you and I make the commitment to do something positive in order to reduce noise, clearly you and I will benefit”.

He also thanked members of BE ROAD FRIENDLY CLUB who, he said “have continued to be our champions of very excellent traffic behaviour”, adding,”It shows that our transport advocacy is not only to the elderly but we have gone to the schools and many of our schools now have this club. So we are catching them from the very beginning and exposing them to the very best culture of road traffic use and public transportation etiquette”.

Governor Fashola, who expressed confidence that the initiative of Horn-Free Day, as a starting point for noise reduction in the State, would be successful, cited the response of the citizens to such initiatives as environmental sanitation which has raised the State from the label of dirty to the cleanest city in the country, the level of voluntary tax compliance in the State about which other countries now seek to learn and the cooperation and collaboration among all the citizens in the efforts which finally saw the  containment of the Ebola Virus Disease in the State.

The Governor commended the drivers, especially the awardees, for their commitment to obedience of traffic regulations adding, “Your presence here today in your numbers has clearly sent a strong message of your commitment to improving our public transportation practices and processes in Lagos State”.

Expressing excitement in anticipation of the Horn-Free Day, Governor Fashola declared, “It is the day from which we take the first step towards a journey of very many rewards. I promise you that our lives will change for the better if we are able to do this. People that doubted our capacity have always been surprised that whenever the people of Lagos get together there is nothing that they cannot achieve”.

In her Lecture titled, “Noise Pollution Is Too Serious To Be Ignored”, the Guest Lecturer, Dr. Kubie Enitan Layeni-Adeyemo, described noise as an unwanted sound adding that if noise is not below 70 decibels it is like spending a day in a factory full of noise.

Citing such noise to include those from generators, aircraft, and even dogs, the Guest Lecturer said a research by the National Research Centre has proved that noise levels produced in different sources at different times of the day are well over the level set by the Environmental Protection Agency and that noise pollution do contribute to many health problems.

Such health problems, she said, include partial or permanent deafness, loss of concentration, nervous breakdown and other physical and psychological problems adding, “Noise pollution is excessive noise which may harm our activity or balance of human or even animal life”.

Earlier in his welcome address, the Commissioner for Transportation, Mr. Kayode Opeifa, promised that Lagos Drivers have been mobilized for 15th of October Horn-Free Day adding that all the motor parks in the State now wear banners put up by the National Union of Road Transport Workers (NURTW) and other stakeholder unions while contact has also been made with drivers’ employers within and outside the State for the occasion.  He also said the Drivers’ Appreciation Day and the Horn-free Day would be an annual event.

Highlights of the event included the award of certificates to drivers from diverse organizations both private and public who successfully completed the State’s School of Traffic Safety Advocacy Programme and presentations by members of BE ROAD FRIENDLY CLUB and a drama group from the University of Lagos.