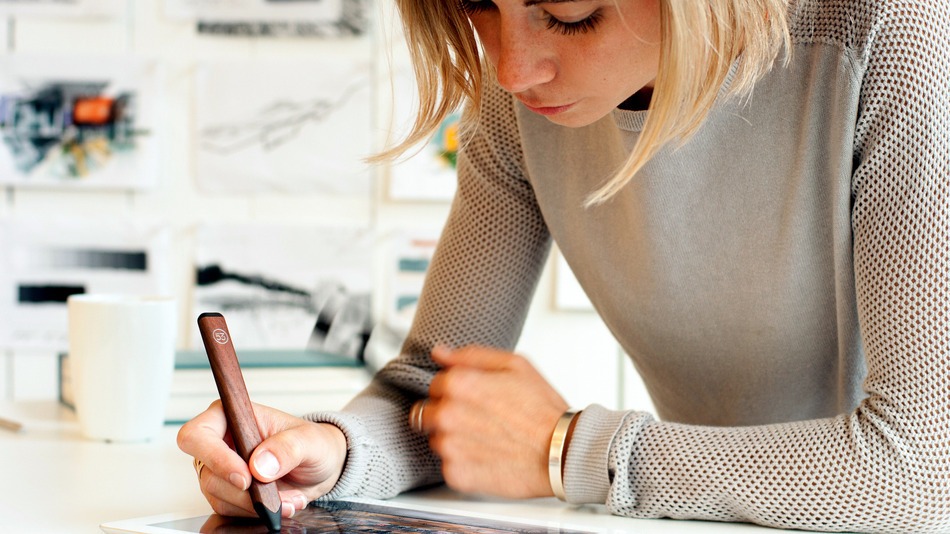 Apple has sold iPad and iPhone styluses in its stores for years, but it wasn’t until recently that I noticed one of the company’s promo videos showing someone using a stylus on an iPad. For me, that was a watershed moment, since I’ve been drawing on iPads with a stylus since almost the day it launched in 2010.

These styluses are typically not powered, and work via capacitive touch, just like your finger on an iPad screen. Companies such as Targus, Wacom and Hard Candy have produced some very good models, but all of them share one trait that, for artists like me, takes some getting used to: You have to keep your hand off the screen when drawing with them. If I rest my palm on the screen when drawing with a Wacom Bamboo Stylus Solo, for example, the iPad thinks I’m performing a multi-finger gesture.

FiftyThree, makers of the award-winning Paper app, have a solution. The company has created Pencil, a Bluetooth stylus that looks and feels a lot like a carpenter’s pencil, right down to the natural mahogany body. By pairing Pencil with the iPad via Bluetooth, it’s able to perform “palm-rejection.” Simply put, you can rest your hand on the screen while drawing.

For now, Pencil, which is set to cost $50 when it hits stores Tuesday, only works with an updated version of Paper, a versatile app that lets you take notes, organize thoughts and sketch out ideas.

FiftyThree CEO Georg Petschnigg told Mashable that the company aims to bring Pencil’s capabilities to other third-party drawing and design apps. You can use Pencil with other apps, but only as a standard capacitive stylus, which means palm rejection does not work.

In a demonstration, we paired Pencil, which also comes in slate gray (actually aluminum), by pressing its tip on a special spot on the app. This pairs the stylus exclusively with that particular iPad, which means you could have a room full of iPads and Pencils without any crosstalk issues.

Once paired, drawing in Paper was a breeze. Faster strokes produced thicker lines and slower strokes created finer ones. The soft, capacitive rubber tip glided smoothly over the iPad’s glass screen (I’ve used styluses with rubber ends that are a draggy mess). The back end of the stylus is also covered in the same capacitive rubber, so when you turn Pencil around and place that end on the screen, it performs as an eraser. And don’t worry about wearing out the tip or base; Pencil ships with a pair of spare parts that are easy to install.

Although Paper won’t recognize your palm when you’re using Pencil, gestures still work well. Two fingers will let you zoom into a drawing, a backward sweep of your finger in a semi-circle will work as undo and you can even use your finger to mix colors or smudge. Pencil on Paper feels like authentic old-school drawing. Any artist will know exactly what I mean.

Since it’s a Bluetooth device, Pencil is battery-powered. To recharge it, you have the pull the black rubber tip out of its wood casing to reveal a USB plug. Petschnigg said that a single charge can last months.

FiftyThree starts taking orders for Pencil this month, and should have them ready for delivery in December. If you can’t decide between wood and metal, I’ll offer this advice: I preferred the feel of the mahogany over the aluminum. There are also two more benefits to choosing Pencil’s wood model: First, every mahogany pencil is unique since it’s milled from a real piece of wood; second, the wood model contains a magnet, so it can hang onto a magnetized iPad Smart Cover or Smart Case.

Most of the time, Pencil worked as advertised, but it was also clear that the stylus is still a work in progress. Twice, a bug kept me from pairing Pencil with Paper until I recharged it. Since FiftyThree doesn’t plan to ship Pencil until December, it should have those kinks worked out by then.

Pencil is not the first palm-rejecting stylus; there’s also the highly regarded Jot Touch 4 from Adonit. It’s also not the first with an unusual design; the Sensu looks like a paint brush. Still, Pencil is one of the first to combine smart design and palm rejection with a very close marriage to a popular app. This combination may help it succeed where other high-end styluses have not.

Study Looks at Risks of the Internet of Things -ISACA

The Average iPhone Sells for More Than Twice the Average Android