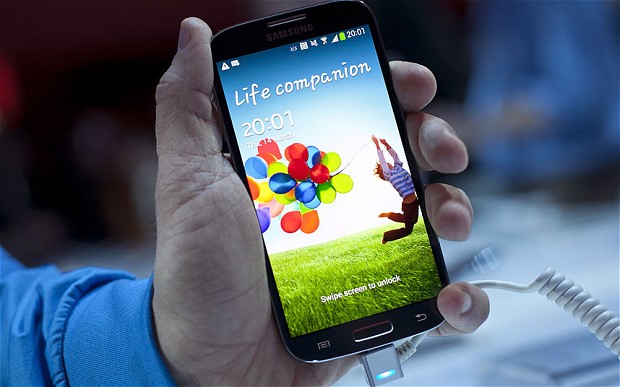 The Samsung Galaxy S4 is the best phone Samsung have ever made. But can it stand up to the iPhone 5 and the HTC One? Matt Warman says yes.

Just nine months ago, Samsung released the Galaxy S3 – it was the first phone to really claim that it could rival Apple’s iPhone. With the S4, now Samsung hopes to say it has overtaken its rivals.

The Korean giant is certainly throwing everything at it: the S4 is so packed full of new features that some have said it forms an incoherent mass rather than a unified product. There’s a 13MP camera and a 5” screen packed into a smaller, lighter, thinner body than the S3, and there’s new eye-tracking technology that simply means you have to tilt your head to scroll on the screen. It’s not perfect but it works. Hovering your finger above a photo or email lets you preview more of it, which works rather more consistently. And there are health features that track how far you’ve walked, a built-in remote control and a deal to print out your photographs. Just in case you feel the need, you can now even take pictures with both the front and the rear cameras at the same time.

So does the S4 feel like the ultimate superphone or like a flabby mess? Is Samsung trying to do everything and succeeding at nothing?

The short answer is no. The S4 is a superb device that does more than any previous mobile phone, but doesn’t force any of its features upon its users. It is rivalled only by the HTC One.

So it packs more screen into the hand than has ever been possible before, and that 5” display offers more pixels per inch than any previous device, and more than the eye can see anyway. It’s compelling in a way that is becoming standard on top of the range mobiles, regardless of the specifications.

There are, however, features where its chief Android rival beats it – such as on sound quality, because the HTC One has dual speakers on the front rather than the S4’s single one on the back. Personally, however, I value sound quality through headphones far higher than volume out loud.

But where the S4 is challenged by both the HTC One and the iPhone 5 is in the most obvious department – the overall design. The argument, however, is simple: metal, from HTC and Apple versus plastic from Samsung. Put so baldly, who would go for plastic? And Samsung clearly know the issue is a fraught one because they have seriously beefed up the build-quality from the S3. The S4, therefore, is among the most premium pieces of plastic you’ll ever hold, but if you’re hung up on the idea that only metal can feel really luxurious, and a luxurious feel is what you want from a mobile phone, then you may simply not be able to get over that plastic.

For myself, I had no problem with the plastic of the S3 and the S4 feels a lot better. The design of devices we have with us for almost every minute of the waking day clearly matters enormously – but I think Samsung’s design is excellent, and focusing purely on plastic is to value style over the substance of features, camera, battery life and more. Some of Samsung’s own software, such as the enhanced calendar and email, are useful, but the S4 is a piece of hardware first and foremost.

The camera, indeed, is possibly the single greatest improvement over the S3. Most improvements are incremental, but this isn’t: at 13MP the pictures are more detailed than on any other Android phone. I disliked the HTC One in part because of the marketing hype over its ‘ultrapixel’ camera – it felt almost dishonest to claim it was a step-change – but the One outclasses the S4 only in low light. In all other conditions it’s equalled if not bettered by the S4, and Samsung has borrowed the interface from its range of cameras to provide an easy to use way to get to filters that can erase people, take burst shots and more. They even encourage users to tinker with at least some of the settings. The chance to use both those front and back cameras, or to see automatically created albums, are nice touches that I doubt many will use. But they will be appreciated when they are.

The Samsung’s battery life is the best I’ve ever encountered on an Android phone, but its performance again is an improvement rather than enough to get me through a day from 6am to 1am without getting nervous.

That vast library of exotic features, however, doesn’t help Samsung on the battery front: some I found I used a lot because they worked, such as waving my hand over the screen to change music tracks or move through a picture gallery. Similarly I hovered my finger over the screen to preview photos too. But the smart scroll, which tracks your eyes to browse websites, didn’t work often enough to feel compelling. But it does feel like a feature that will become a standard, as does the ‘Smart Pause’ feature that pauses video if you look away from the screen.

The S4 is an incremental improvement on the excellent S3, and it does more than either the HTC One or the iPhone 5. Will you instantly use all its whizzy features if you buy one? No. Will you have the option to? Yes. It’s the best looking, most capable, fastest phone Samsung has ever made. As I’ve spent more time with the HTC One I like it more and more, but I think choosing between the two is now a matter of personal preference rather than a straightforward choice between good and best. Both have to be seen to be believed.