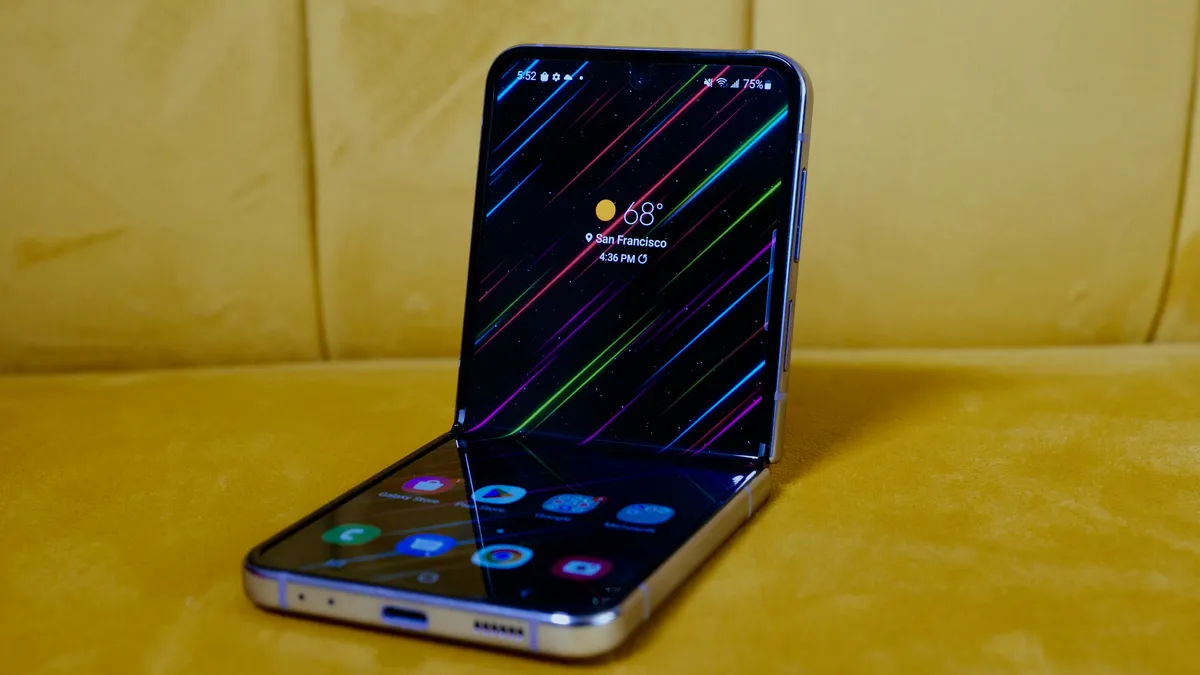 Samsung’s newest Flip has numerous updates including a bigger battery, a new main camera sensor, and the latest Snapdragon chip.

Samsung’s Galaxy Z Flip 4 is the most portable and fun phone I’ve tested this year. It’s the “have your cake and eat it too” of smartphones. You can fold it attractive, slender, 6.7-inch high refresh-rate screen in half, turning it into something the size of a drink coaster that easily fits in most pockets.

The Z Flip 4 is also one of the best realizations of Samsung’s folding phone aesthetic to date. You can use it just like a conventional “candy bar” phone, but get the added benefit of it being super portable and access to several special features that aren’t found on other phones aside from the Fold.

The Flip 4 starts at $1,000. Most of that price is because it can fold in half, but it also packs one of the most powerful and efficient processors found in any Samsung phone. That price also gets you a robust build and something that most gadgets lack: personality. To quote Jules from Pulp Fiction, “Personality goes a long way.”

Nearly everything about the Flip 4 feels fun and approachable, from its petite, squared-off footprint when it’s closed to the fact that you can choose your own “bespoke” color scheme for it. But the same can be said about last year’s Galaxy Z Flip 3, which Samsung continues to sell at a discounted price. I was hesitant to recommend the Flip 3 because its battery life wasn’t great and the cameras were just OK. And those caveats still exist for last year’s Flip even at its lower $900 price.

The new Galaxy Z Flip 4 inherits all the good things from its predecessor and addresses most of the Flip 3’s shortcomings. For over two weeks, I tested a review sample on loan from Samsung. While I appreciated all of the upgrades, large and small, Samsung could still go further, especially in terms of extending the battery life and improving the camera quality. I’d also like to see more functionality on the cover display.

Still, the Galaxy Z Flip won’t be truly ready for the masses until it can reliably get through a long day on a single charge. The Flip 4 isn’t there yet, but it’s getting close.

It’s also worth a mention that, even though the phone costs $1,000, Samsung and wireless carriers have been heavily subsidizing the price, making it a bit more palatable for those who really want one.

The Flip 4’s design is fun and minimalistic

You’d be forgiven for confusing the Flip 3 and Flip 4. They are virtually identical, which is fine because the design works so well. The Flip 4 was upgraded with Gorilla Glass Victus Plus, aluminum sides, a more durable main screen and a minuscule increase in weight that adds up to the Flip 4 feeling solid. Though I’d never describe the phone as heavy. It has a nice, satisfyingly firm feel. I didn’t need to baby it or treat it differently from any other phones I use.

It has an IPX8 rating for water resistance, meaning it can be submerged up to 1.5 meters (about 5 feet) for 30 minutes. But as impressive as that is, the Flip 4 lacks dust resistance.

The phone has a new matte finish, which in purple doesn’t show fingerprints. It’s far better than the glossy finish on the Flip 3. I dig how the Flip 4’s aluminum sides have a shiny purple hue to them.

If you’re wondering about the screen crease, it’s still there. It doesn’t bother me, but I get why some people might be put off by it. It’s not that noticeable since you’re likely to use the Flip 4, like any phone, head-on.

The Flip 4’s display isn’t laminated to a glass panel like a regular phone. There’s just a minute layer that separates your finger from the high refresh rate screen, and it feels like there is nothing between your fingertips and the internet — or you and your photos.

This might seem silly to mention, but the Flip 4 is delightful to open and close. It takes a little time to get used to, but after a day or so I was able to flick it open one-handed, Captain Kirk style. The closing sound is ridiculously gratifying and adds to that “personality” I mentioned earlier. These are the details you’re paying $1,000 for.

The little cover screen that tried

On the outside of the Flip 4 is a petite cover display that’s the same size as the one on the Flip 3. In terms of functionality, it’s largely the same as well. I wish it did more.

You can now send canned responses to certain messaging apps directly from the cover display. But there isn’t an option to type or dictate a reply without opening up the phone. Of everything on the Flip 4, the cover screen is the place where Samsung could do more.

When I reviewed the 2020 Motorola Razr, its external display really opened my eyes to what was possible. I was able to use the Razr’s Quick View display as a tiny Android phone. I even got video games like PUBG Mobile to work on the external display.

To be clear, I don’t need to play Call of Duty on the Flip 4’s cover display. But how about a smartwatch-like keyboard for replies? Or maybe a larger cover display? There’s a lot of space to extend the current one.

Then there’s Flex Mode, which triggers software to change when the Flip 4 is positioned halfway open. App content moves to the top half and tools and settings are at the bottom. There are more apps optimized for Flex Mode, like Instagram and Samsung’s own Gallery app which now lets you edit a photo in Flex Mode while keeping the picture on the top half of the screen. Flex Mode on previous Flips and Folds awkwardly moved the photo to the middle.

Most apps aren’t optimized for Flex Mode but Samsung has a creative workaround in Settings called Labs that lets you force any app into Flex Mode. Usually that means the app moves to the top half and Samsung’s default Flex Mode interface is on the bottom. So technically it works, but it doesn’t really do much.

The big new addition to Flex Mode is that it gets a trackpad and tiny cursor. You can click buttons and open menus with the world’s tiniest cursor, or use two fingers to swipe and move around like exploring street view in Google Maps. This trackpad seems like a novel idea, but in actual use it’s not very practical.

The Flip 4 has the same selfie and ultrawide cameras that are included on the Flip 3. The main camera gets a new image sensor which, like the battery, gives photos a boost in image quality, but nothing major.

Photos from the Flip 4 have a nice, punchy look in terms of contrast and color. For some, the way the Flip 4 processes colors might look over-saturated.

Surprisingly, that new main sensor comes into its own when taking photos in low-light conditions. Photos have nice detail and not a lot of image noise unless you’re zoomed in. The Flip 4 doesn’t have a dedicated telephoto camera, and that means you rely entirely on digital zoom, which is where the image starts to fall apart.

Despite having B-grade cameras, the Flip 4 gives you one of the most versatile camera setups on any phone. The fact that it can fold and hold its position means you’re able to put the phone nearly anywhere and position it at a bunch of different angles. I was able to grab a video of my cat playing at her eye level and capture some snazzy shots of a pan of cooking gnocchi because the Flip 4 is its own tripod.

And one small upgrade with mighty ramifications is that the cover display can now show a full preview of either portrait or landscape photos and videos. Previous Flips severely cropped the camera preview on the cover display, making it a challenge to frame group selfies. The new preview functionality and the ability to trigger the camera shutter by holding your hand up means the Flip 4 could be one of the best creative tools for capturing social media content.

A diminutive increase in battery life

The Flip 4’s larger battery and new Snapdragon 8 Plus Gen 1 chip, which increases efficiency, translates to a tiny bit longer battery life. However, the difference isn’t game-changing. On the Flip 3, I found myself making it to the late-afternoon before it needed to be charged. With the Flip 4, I typically made it through a day. But if I used my phone heavily to watch videos, take photos or have a video call, that the battery lasted me until early evening at best.

I definitely won’t scoff at getting a couple more hours on a single charge. The Flip 4’s better battery life makes it less of a compromise for someone coming from a nonfolding phone. But it’s still something to consider.

Over 45 minutes with the screen at full brightness, I watched a couple of YouTube videos, scrolled my Instagram feed, played a bout of PUBG Mobile, then raced a circuit in the Mario Kart Tour, took a 5-minute video call via Zoom and, lastly, played Alto’s Odyssey. The battery went from 70% to 56%.

The new processor and Android 12L make the Flip 4 feel peppy and responsive. Animations look smooth and gaming is fun. Multitasking between two apps in split screen runs well. And the performance was impressive, especially when it came to benchmark tests which allows us to compare the performance of one phone against another. The Flip 4 performed better than last year’s Flip 3 and even the Galaxy S22.

If you are a current Flip 3 user, should you upgrade? I wouldn’t. I don’t think you get enough “new” on the Flip 4 to warrant a year-over-year upgrade. If you’re trying to decide between getting a Flip 4 or a discounted Flip 3, that’s a tougher conundrum. I’d probably push you to get the Flip 3 and save money.

If you have an original Flip or a Flip 5G, I do think upgrading is worth it, especially if you can snag one of those hefty trade-in discounts. You get a more robust build with water resistance, a bigger battery, a larger cover screen, a faster and more efficient processor and a high-refresh-rate main display.

If you’re deciding between a Flip 4 and a Galaxy S22, your choice really comes down to whether you want a phone that folds or not. You’re really paying $200 more for that capability. While the Flip 4 has a faster processor, the Galaxy S22’s battery lasts longer on a single charge.

At the end of the day, the Galaxy Z Flip 4 is a delightful reminder that an innovative design that balances form, function, and fun goes a long way. And while all the upgrades are a step in the right direction, the Flip 4 still comes up short at basics like battery life and photography.