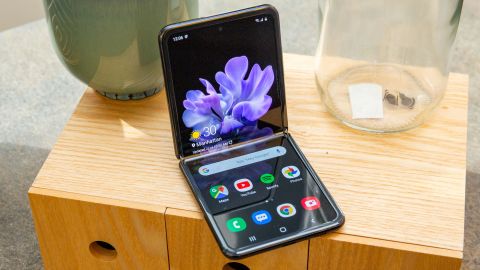 Battery life. Screen durability. Camera quality. Coolness factor. These are some of the top questions I’ve set out to answer this week while testing the Galaxy Z Flip, Samsung’s new flip phone with a foldable screen. At the start of my fourth full day, I’m starting to really like the novel and engaging flip phone. It’s different, but in many respects, the design works. The Galaxy Z Flip is starting to prove that foldable phones deserve to live on to the next generation.

My colleagues have already compared the Z Flip to the Motorola Razr (not the final assessment, of course), and pit the two against each other in a cringey but irresistible drop test. The Galaxy Z Flip costs $1,380 while its biggest competition, the Motorola Razr, comes in at $1,499. By the time my rated review is in, we’ll have an even clearer idea where each one wins and loses and where foldable phones should go in 2020.

Here’s what you need to know before we dive in. The Galaxy Z Flip uses ultra-thin glass for its 6.7-inch display and has a hinge that’s stiff enough to stand up on its own, so you can use the device hands-free when it’s on a tabletop. It has two batteries that combine to give you 3,300 mAh of capacity (the smallest Galaxy S20 5G has 4,000 mAh), and there’s a 1.1-inch pill-shaped screen on the outside when you close the phone.

I’ve been keeping a hawkish eye on battery life since powering up the Z Flip for the first time. My final battery rating will combine my real-world observation with battery drain tests in the lab, so stay tuned.

Yesterday, I got about 13 and a half hours of use out of the Z Flip (it hung on an extra 25 minutes on 1% battery, which suggests it isn’t calibrated yet).

Thirteen-ish hours would be appallingly dismal for a standard phone that costs $1,400. By comparison, the $1,100 Galaxy Note 10 Plus can easily take me from 6 a.m. to 10 p.m. and still have 20% to 30% remaining in power reserves. I never worry about it, even if I’m going out until the wee morning hours. So far I can’t say that about the Galaxy Z Flip.

However, I do feel that you could use it normally during a typical workday and top it up later if you’re planning to burn the midnight oil. Note that phone batteries typically weaken over time. The Z Flip comes with a 15-watt charger.

Star feature: A phone that can stand on its own

I adore the Z Flip’s ability to hold itself upright. While watching video, reading a news story, taking selfies and even running performance tests, propping the Z Flip’s screen up or turning the whole thing on its side meant I didn’t have to hold it. It made my selfies better (when using a timer). It’s remarkable how many angles the hinge will support before snapping fully open or closed (yes, there are magnets on all four corners).

That rigidity means you’ll need to exact a bit more pressure to close the phone and snap it or pull it open, but I haven’t felt like I’m straining against it. Yet the result is that you can prop the Z Flip on its base and tilt the screen at any number of angles to take a selfie photo with a friend — or a portrait shot — watch a video, or do any number of things.

The same goes for slightly bending the phone in half while watching a video so it can become its own stand. When you bend it, some apps dynamically shift into a split-screen mode so you see the action on the “top” and the controls or comments on the “bottom.” Not enough apps take advantage of the feature straight out the gate, but it’s one I hope to see Google and others embrace for the sheer convenience factor.

The Galaxy Z Flip has two 12-megapixel sensors (wide-angle, ultra wide-angle) and a 10-megapixel internal camera. So far, they’re all pretty good, and what I expect from a Samsung phone. Image quality already seems better than on the Razr, which took “just OK” photos on its 16-megapixel camera, according to my colleague Patrick Holland.

I’ve been happy with the pictures I’ve taken so far, especially in abundant lighting. They’ve all been good enough to share, and some are good enough to print. Testing continues…

The Z Flip has a new photo mode that it shares with the Galaxy S20 trio of phones: Single Take. This photo mode captures up to 10 different still photos and four different videos. So far I’m less enamored with this one. I haven’t figured out what kind of scenario to use it in and when I tried it out on a street performer, I wound up deleting a lot of the haul because I wasn’t that happy with the quality and composition.

That said, there were some usable shots I got too, and it didn’t take a lot of time or obsessive focusing to get them, which is also good.

I’ve gotten pretty good selfies from the Galaxy Z Flip so far, especially when opening the device so it sits up on its own and using the timer so I don’t have that awkward “selfie arm” that shows up in the typical handheld shot.

What isn’t so good is trying to take a selfie when the Z Flip is closed. You can double-press the power button to launch the front-facing camera when the phone is closed. You know it’s ready for you when you see yourself on the tiny 1.1-inch cover display. Swipe the area to switch to a wide-angle selfie, then press the volume-down key to take the shot.

All that is well and good, but the diminutive cover screen makes for a short, pill-shaped viewfinder that isn’t actually useful for positioning yourself in the larger context of the image. It’s also so small that you can’t really see yourself.

If you’re taking a picture of another person, you can press an on-screen camera control to turn that cover screen into a viewfinder for them, but now they’re so far from the camera that it doesn’t do much good.

The outer screen: Smaller than it needs to be

The selfie viewfinder situation is the most obvious symptom of the Z Flip’s comically small display, but I’m at a bit of a loss with the rest of its features.

It’s good for seeing the time and battery percentage (though I’m going to poke around for an always-on setting). It’s not as good at other things. You can tap for Wi-Fi networks and to see missed calls and alerts. For example, I scrolled to see a Slack notification, tapped it, and saw my co-worker’s Slack message roll across the screen like a ticker. You can open the phone to open the app.

Motorola is on the right track giving the Razr the ability to send canned smart replies and voice messages, which gives the phone more to do from the outer screen without having to open it up.

Is the Z Flip’s screen easy to scratch?

So far, so good for me. Torture tests are in progress around the internet (including at CNET), but my goal isn’t to try to break the Z Flip. It’s to authentically use it.

I don’t see any fingernail scratches or divots on my screen at this point, or any other blemishes. It’s something I’m keeping an eye on as I test the device.

The Z Flip’s ultrathin glass screen is meant to shield the display from the more raucous elements, while also providing a smoother surface that more convincingly conceals that telltale crease where the screen bends in half. That doesn’t mean it’s hardy. Samsung still warns that the Z Flip is fragile enough to break if you press too hard on the screen, close it around keys or drop it into water or a big pile of dust.

The Z Flip is subject to Samsung’s one-year warranty in the event of damage, as well as Samsung’s premier concierge help for foldable phones.

The Z Flip’s hinge has nose hairs, kind of

The Galaxy Fold’s first design caused some pretty public embarrassment to Samsung when dust and crumbs easily worked their way into the hinge and under the screen. Those early reports on reviewers’ phones caused Samsung to delay the Fold’s launch by about four months and completely redesign it. The good news is that those learnings have been carried into the Z Flip.

The hinge is protected by elements like interior vinyl fibers — which sound a lot like nostril hairs — to keep dust out of the mechanism. There are also plastic caps bordering the inside of the phone at the hinge, which also help rebuff the elements. I run my fingernails around the thick plastic bezel and note how sealed it feels. On the Galaxy Fold and Motorola Razr, I felt I could pry my fingernail under the screen without much effort.

The protection of these interior fibers only goes so far. Samsung clearly notes on the phone’s overwrap care instructions that it’s susceptible to dust and water damage, so be alert. There’s the typical one-year warranty and a concierge service for 24/7 customer care.

But does it have a crease?!

Look, every foldable phone I’ve seen has a crease. When the light shines directly on it, you see it. When you run your finger down the seam, you feel it. When an exciting thriller or documentary movie plays, or when you’re sucked into an engaging article or game, you hardly notice it at all.

I do feel the Z Flip’s glass cover material helps minimize the hated crease. So does the fact that the width of the bend is actually pretty minimal — just shy of three inches — compared to the Galaxy Fold’s 6.34-inch vertical seam.