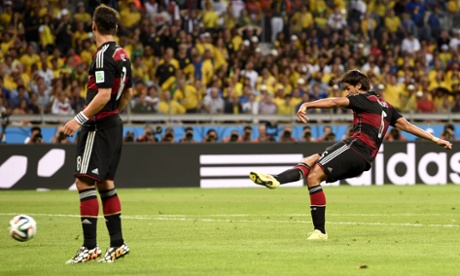 Germany’s 7-1 victory over Brazil in the World Cup semi-final sent shockwaves around the football world, but it was also a big deal on Twitter.

The social network says that the match became its most discussed sports game ever, with 35.6m tweets. It easily beat the previous record of 24.9m tweets set by the Super Bowl earlier in 2014.

That in itself is a sign of Twitter’s growth. In 2012, Usain Bolt’s gold-medal 200m sprint peaked at 80,000 tweets per minute, while Barack Obama’s Democratic National Convention acceptance speech peaked at 52,756 tweets per minute.

The World Cup has become the latest showcase event for Twitter’s second-screen ambitions, complete with a promoted section within the company’s mobile apps when matches are playing.

Even Miley’s TV twerkfest with Robin Thicke had already been outdone during this month’s tournament, with Brazil’s victory over Chile on penalties having peaked at 388,985 tweets per minute.

Twitter has also published a “heat map” of how the Brazil / Germany game played out on the social network, tracking tweets mentioning key terms around the game, while noting that Miroslav Klose – who broke another record against Brazil with his 16th World Cup finals goal – was the most mentioned player on its network.

Twitter is engaged in fierce competition with Facebook over which is most popular for chatting about television, from global sports events like the World Cup to locally-popular shows.

“Twitter makes television better: it is in fact a force multiplier that can enhance the impact and possibilities of television,” said the company’s chief media scientist Deb Roy at the MIPTV industry conference in April.

The gadget that reads to blind