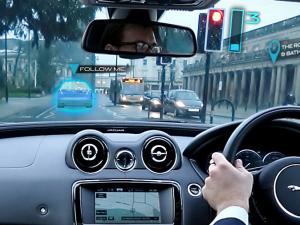 Imagine how much easier and safer your city commute would be if you had a projected ‘ghost car’ to follow and if you actually could see through the car’s pillars?

These are exactly the kind of technologies that Jaguar Land Rover is working on right now.

The technology that will give drivers a 360-degree view out of the vehicle is similar to the technology fitted to the recent Land Rover Discovery Vision concept, but instead of a ‘see through’ bonnet for off-roading, the latest innovation makes the vehicle’s A, B and C-pillars transparent in order to eliminate those blind spots that might prevent you from seeing pedestrians, cyclists and other vehicles.

So how does this ‘magic’ work?

Each pillar has a screen embedded into it, which broadcasts a live feed from cameras covering the blind spots on the other side of the pillars.

The system also works hand in hand with an advanced heads-up display that highlights hazards in your path.

This ‘360 Virtual Urban Windscreen’ could be taken a step further by connecting it to the cloud, which could then present you with all sorts of relevant information, such as the number of parking spaces available nearby and fuel prices.

To make navigation easier than it’s ever been, the company is also developing ‘Follow-MeGhost Car Navigation’, which projects an image of a vehicle in front of you to lead the way. After all, it is a lot easier to follow someone than it is to interpret the ‘metres to turn’ guidance that today’s navigation systems use. And unlike your friends, the ‘ghost car’ won’t leave you behind when you catch a red light.

As JLR’s research director Dr Wolfgang Epple puts it: “Driving on city streets can be a stressful experience, but imagine being able to drive across town without having to look at road signs, or be distracted trying to locate a parking space as you drive by. “We want to present all of this information on a Heads-Up Display in the driver’s eye-line, so the driver doesn’t have to seek it out for themselves and take their eyes off the road ahead.”

WhatsApp could be heading to your desktop soon