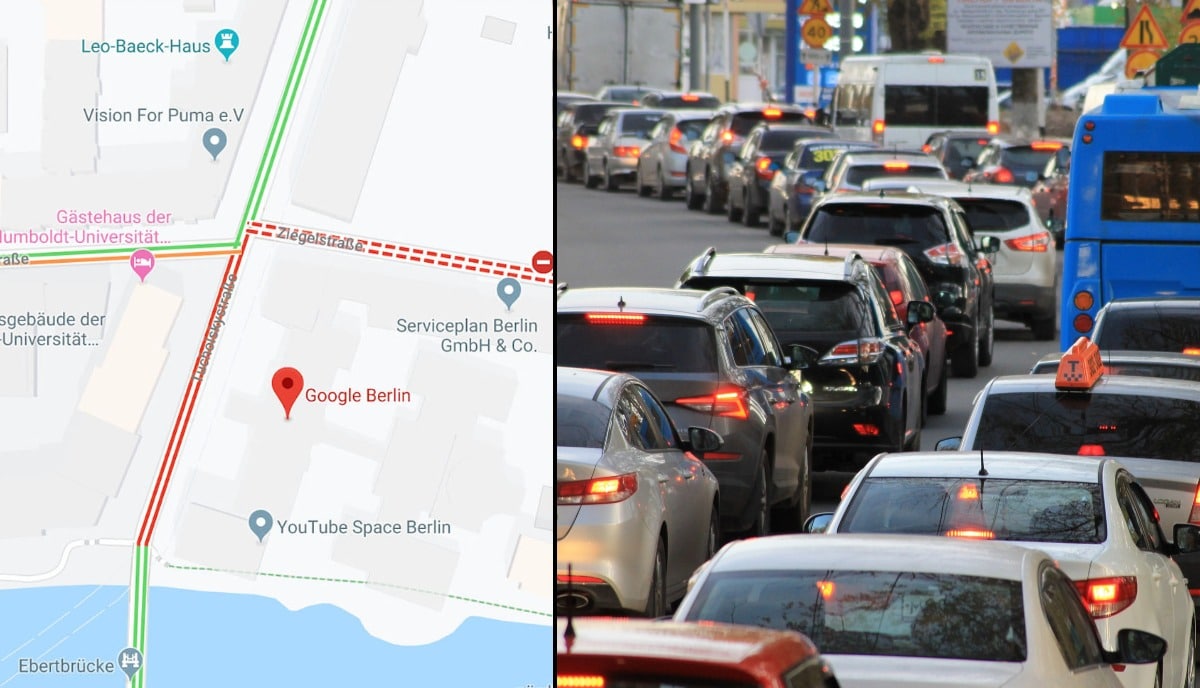 Berlin artist Simon Weckert recently “hacked” Google Maps by filling a red wagon with 99 iPhone running Google Maps and dragging around the city to fool the service into thinking there was a traffic jam when there wasn’t one.

It’s a clever trick, but it raises questions as to how Google Maps tracks and responds to the data it collects in normal traffic conditions. If it’s possible to fool Google Maps with a pile of old iPhones and a wagon, can you always be certain the app is accurate? Based on what we know about Google Map’s algorithm and the company’s responses to Weckert’s DIY traffic jam, the answer appears to be: yes, for the most part.

How traffic jams show up on Google Maps

Google Maps continually refreshes based on anonymously tracked user data, traffic sensors, and satellite data to make sure the app is displaying the most accurate traffic conditions possible.

If you’ve ever used Google Maps, you’ve likely seen streets colored green, orange, or red. Green roads mean traffic is moving normally, but orange and red represent slowdowns. Slowdowns show up when users in navigation mode are currently traveling at slower-than-usual speeds on that part of the road and are applied by Google automatically. However, once other divers using Google Maps are able to get through the area at normal speeds, Google will remove the slow down status for that area—even if other users are still driving slower.

It’s unclear how many slower-than-usual users are necessary for Google Maps to register it as slow traffic, but according to 9to5Google’s report on Weckert’s traffic jam experiment, it only took a single car driving past him at normals speeds to undo the traffic jam status caused by his wagon of iPhones. That said, it appears that Google Maps ignores when lots of users are at a standstill. Weckert’s wagon had to be moving in order for Google Maps to see the traffic jam—even though nearly 100 phones were in navigation mode and not moving. How long a vehicle must be idling before it’s ignored is unclear; obviously, Google Maps will notice if several users are stopped on a highway and report it as a slow down, but if a bunch of people are parked in a parking garage and just happen to have navigation mode on, then you probably won’t see any traffic jams listed in the area.

Interestingly, not all vehicles are treated equally. Google Maps can tell the difference between a car, motorcycle, and other vehicles (at least in certain countries and regions). So even though a cheeky scooter might be able to weave its way through a traffic jam, Google Maps could—in some cases—recognize that the smaller vehicle’s movement doesn’t necessarily mean that regular traffic conditions have resumed.

Accidents, construction, and other traffic incidents

Accidents, construction zones, speed traps, and other alerts can all be reported in Google Maps, and the more users that report an alert help it show up faster on the map for others and potentially help them avoid slowdowns and find better routes if necessary. We’ve previously covered how to do this on both Android and iOS, but here’s how to report traffic incidents and slowdowns in Google Maps if you’re unfamiliar:

Google compares the speeds of its users with speed limit information to calculate estimated arrival times. Basically, it takes how fast you’re actually moving, how fast you should be moving based on speed limits, how fast other drivers are going and adjusts how, and how much further you have on your route to determine your ETA.

Google Maps will also cross-reference user-reported conditions and other traffic data is monitors with your route and current speeds, and will adjust your arrival times if it notices a slowdown or other incidents along your route. Once the app has determined the severity and length of the slowdown, it will alert users whose routes are affected and suggest alternative directions if it’s ultimately faster.

Google Maps’ reroute suggestions aren’t always perfect, however. The algorithm can only respond to the most recent data and make a guess—it certainly can’t tell the future, either—so rerouting won’t always be faster (or necessary). That said, you can be reasonably confident that the app is giving you the most up-to-date information it has.