Huawei has built the Disneyland of tech R&D
Advertisement 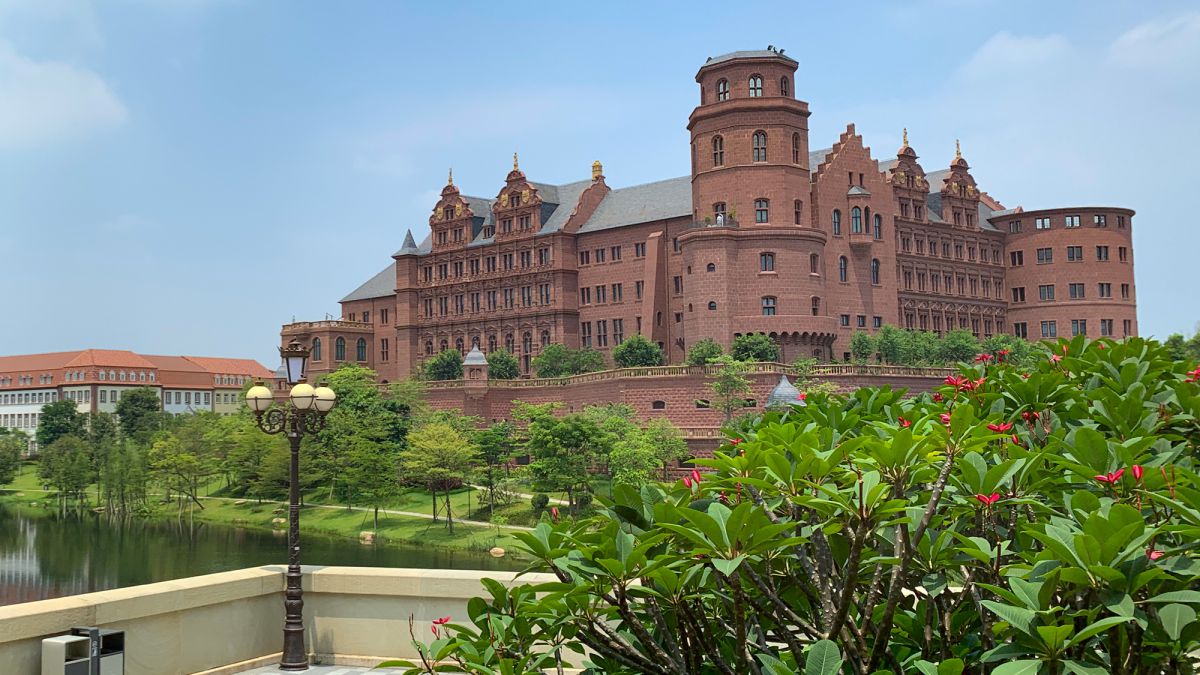 A couple hours outside Huawei’s old headquarters in Shenzhen, China, the company has built a new campus in the city of Dongguan to eventually house 25,000 R&D employees. But this is no sprawling network of glass towers – it’s composed of 12 mini-districts built to look like a different European city, all linked by a full-size train.

In other words, it’s a lot like a Disneyland for tech research.

Walt Disney’s famous park is around 85 acres (0.34 square kilometers), but this research center is four times the size at 296 acres (1.2 square kilometers) – which grows to 1,976 acres (8 square kilometers) if you include the factories across an adjacent lake. Each mini-district – allegedly called ‘towns’ by some Huawei employees – has grandiose buildings, cobbled or bricked streets and landscaped greenery.

Huawei invited tech media out for a casual tour of the grounds, and TechRadar got a close-up look. We started at a coffee shop and got on a two-car train in a bold orange with brass accents, looking straight out of Industrial-era Europe.

We breezed past areas patterned after Paris, Burgundy, Heidelberg, Cesky Krumlov, and Bologna, packed with ‘towns’ in the style of, and laid out like, each city – some so large, they might as well be castles. It was completely impressive, yet out of place amid the lush Chinese flora and the shabby residential high-rises in the distance. Image 1 of 5

The effect was surreal – a dizzying dissonance between carefully-constructed medieval and Renaissance European buildings that would still function as everyday workplaces. Each member of our media group stared agog as we took the long orange train beyond the completed ‘towns’ (seven of twelve are work-ready, five years after construction started ) to get a sense of the installation’s scale.

We were left with the obvious question: Why?

Or to reframe the inquiry: why not just make a modern glass-and-grass campus like the other tech titans? Our guide explained the philosophy behind the Dongguan facility: Huawei founder and CEO Ren Zhengfei wanted employees to work in a place they found peaceful, which is a far cry from the busy metropolitan sprawl in Shenzhen or Dongguan. Image 1 of 5

If true, that sentiment – and the sheer resources spent to bring this city-replicating vision into reality – evokes the whimsy and dedication Walt Disney swirled together to make Disneyland. “Here age relives fond memories of the past, and here youth may savor the challenge and promise of the future,” Disney famously said at the park’s opening in 1955 in a brief dedication.

On our visit, tech media were introduced to the company’s myriad applications of its tech, from augmenting existing industries with 5G to making cities ‘smart’ with enough sensors to monitor power consumption, air quality, and even the capacities of individual trash cans. And, yes, streamlining the networks behind security camera systems (to help missing children and crowd control, a Huawei tour guide said) as well as networks (and sometimes chips) behind facial recognition software.

Of course, the company’s tech innovations aren’t just made in Dongguan: that still-unfinished facility is one of 16 global R&D centers. Nine of them are in China, but whereas the others have around 10,000 employees each, the Dongguan installation will house around 25,000 once it’s finished – combined, the R&D contingent is over half of Huawei’s 188,000 employees.

But those other R&D facilities weren’t built as a paean to culturally significant European cities. It’s unclear if the Dongguan campus was built so extravagantly to lure employees or to satisfy the eccentric whims of upper staff (if not Zhengfei himself) – or both, or neither. What is clear: if this was built in the US, it would be soundly criticized as a needlessly ornate and expensive feat of engineering – just like Disneyland had been before it showed up its critics.