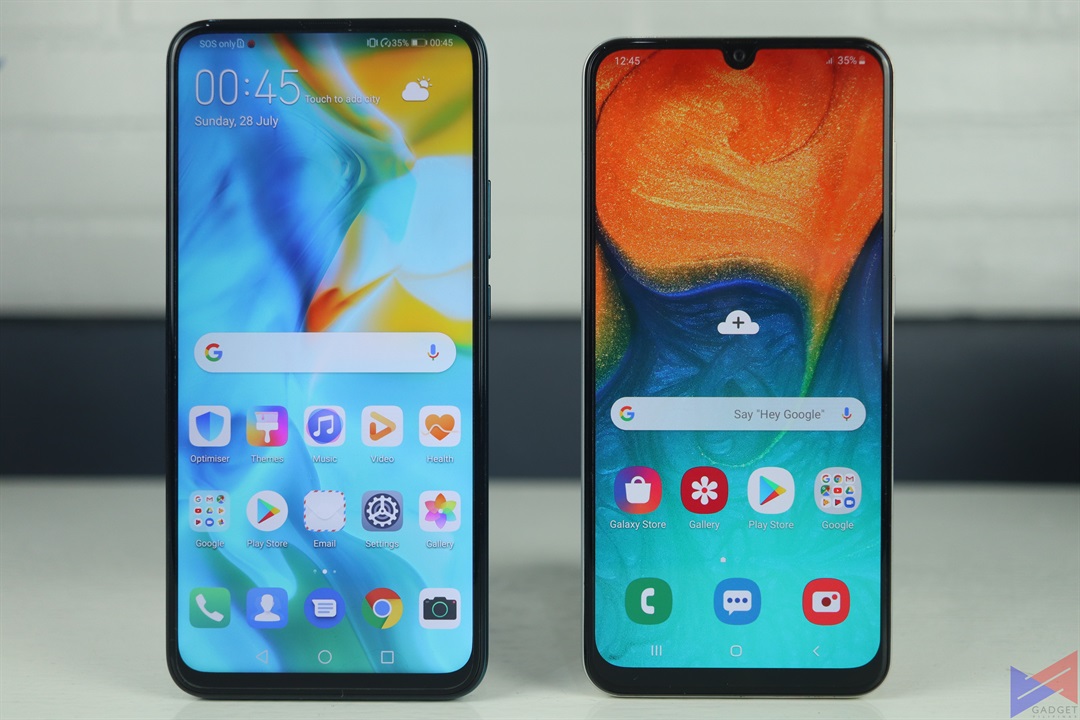 The Huawei Y9 Prime 2019 and Samsung Galaxy A30 are two rival smartphones competing in the crowded South African mid-range segment.

They’re both feature-packed, boasting big batteries, large screens and a pretty large target market. But how do they stack up head-to-head?

We take a look at each of these smartphones and judge them by their key features.

The Samsung Galaxy A30 is one of the Korean company’s newer mid-range smartphones. With it comes a large screen, minimal bezels and a choice of blue, black and white.

There is a rounded notch, which does eat away at some screen real estate and there’s a dual rear camera beside a physical fingerprint sensor at the back. At the bottom Samsung’s included a headphone jack, USB-C port for charging and data, and a single speaker grille.

The Huawei Y9 Prime 2019 arrived in South Africa just a few weeks ago, and features no notch. In fact, the selfie camera is tucked away inside the body and pops out when need be. This means that it’s all screen up front, and a large screen at that.

Around the back, Huawei’s employing two primary cameras and a depth sensor beneath it, and a physical fingerprint sensor. At the bottom there’s a headphone jack, USB-C port for data and charging, and a single speaker grille.

The screen has become an important distinguishing feature for phones in 2019, and these two employ different philosophies.

For Samsung, the Galaxy A30 features an sAMOLED display at 6.4-inches from corner to corner with a 2340×1080 resolution. However, a piece of it is chunked away due to that notch in the top-middle of the screen.

The Huawei Y9 Prime 2019 takes a different approach. It uses a larger 6.59-inch IPS LCD display with 2340×1080 resolution. The larger size does mean it has a lower screen density than the A30, but it makes up for this by ditching the notch. The Y9 Prime 2019 is essentially all screen, which is something we don’t see to often in South Africa.

Again, Samsung and Huawei tackle the power requirements of the modern user with their own technologies.

The Samsung Galaxy A30 uses the company’s Exynos 7904 chipset with eight processing cores with a clock speed of up to 1.8GHz, up to 64GB of internal storage and 4GB of RAM. The chipset is based on an older 14nm manufacturing process, but the phone does support microSD card storage expansion.

The Huawei Y9 Prime 2019 uses its HiSilicon Kirin 710F based on the newer 12nm manufacturing process. It also has eight cores, but features a higher clock speed at 2.2GHz. This effectively means it’ll be better suited for gaming than the Galaxy A30.

The phone also features up to 128GB of internal storage and 4GB of RAM with microSD card expansion support too.

Huawei’s selfie camera, as mentioned before, slides up from within the body when required. But it also sports a 16MP sensor with the same aperture.

Huawei also uses this philosophy but adds a depth sensor, giving it a triple rear camera setup instead of Samsung’s dual camera solution. This allows the phone to snap better, more layered portraits.

The primary camera features a 16MP sensor with f/1.8 aperture. Beneath that there’s an 8MP wide-angle camera too.

Battery life is becoming more critical for buyers, especially in this price range. And both manufacturers seem to understand this.