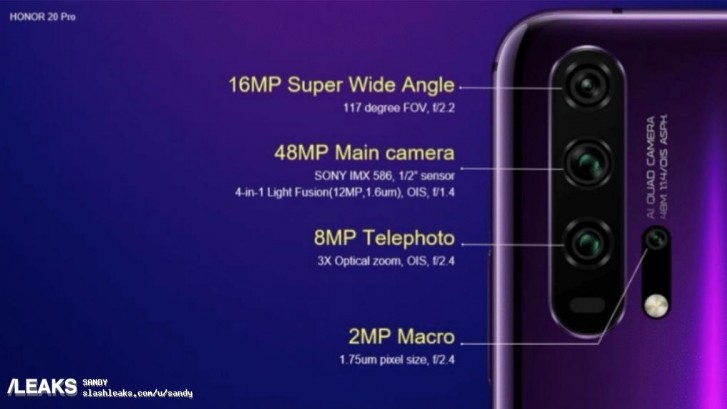 Honor is in the final stages of preparation to launch the Honor 20 series, and they are surely going all out for this one. Even though they have managed to keep a solid lid on the information around this phone for a while, we have gleaned in the past that this device could feature four camera sensors on the back.

It seems the brand has confirmed the same in a new taser image which states ‘Fantastic beauty, four photos.’

Of course, this is as vague as it gets, but it could be what we are thinking too. If this were to be true, there is a high chance we see the massive 48MP sensor from Sony be the main camera to be supported by a 16MP super wide-angle lens, and two 2MP cameras – one for depth sensing and the other being a third sensor for detailing, maybe.

These cameras will, no doubt, be something to look forward to. Likewise, they could have one of the best Night Modes to expect – given that the president of the brand shared a Night Mode picture from one of their upcoming devices once but blurred it out for effect.

For now, we have the leaks to rely on for other possible specs.

Going in line with other massive units for this year, there s a high chance the Honor 20 carries a 6.26-inch camera with almost perfect bezel-less screen, save for the hole in the screen. 6GB and 128GB configurations will help this phone give many other units on the market a run for their money, and the in-house HiSilicon Kirin 980 chipset will keep things going.

Perhaps one of the most impressive arrangements is the fingerprint scanner being on the power button, since the phone doesn’t have one the back nor under the screen (this is an LCD screen, so that’s understandable).

With Android 9 Pie coming with it out of the box, it remains to see which one of these specs are correct, and what we might have missed.