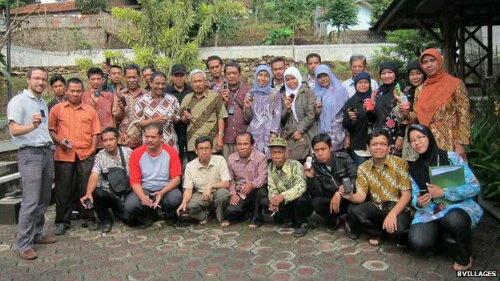 The BBC’s Karishma Vaswani meets the Indonesian farmers using social networking to make the most of their produce.
Indonesia is an economy on the move these days – and fast becoming one of the most technology-savvy countries in Asia.

Just look at the facts – Indonesia is one of the world’s biggest users of Twitter. It is also home to the world’s third-largest group of Facebook users.

There’s even talk of a Silicon Valley-style boom taking place in Jakarta’s suburbs, with the likes of US tech giant Yahoo snapping up an Indonesian start-up.

But while urban Indonesians are considered to be as plugged-in as their counterparts in Singapore or Seoul, out in the countryside, it’s a different story.

Challenging existence
Just venture a few hours outside Jakarta, the capital, to the village of Kadaka Jaya, and it is easy to see the digital divide.

The further you drive up winding roads, the worse your mobile phone signal gets.

It’s hard to spot a telephone tower anywhere, but for miles on end you can see emerald green paddy fields peppering the hills.

It is peacefully quiet – a far cry from the hustle and bustle of Jakarta.

From a distance, I saw a lone Javanese farmer sitting in the middle of his field, presumably for a leisurely afternoon snooze.

Ade, 24, uses technology to monitor demand for his chilli crop
It’s thought that almost half of Indonesia’s population of 230 million make their living from the land – often a challenging existence that depends on the whims of the weather and the prices of the markets.

It is in Kadaka Jaya that I meet Ade, a dynamic and bright 24-year-old farmer.

Ade has followed in the footsteps of his family, tilling the land the way so many before him have done.

Crop prices
Now though, change is coming to Kadaka Jaya.

“As farmers we constantly need new technology to improve our livelihoods,” Ade tells me, as he takes a break from picking ripe chillis.

“There’s no way for us to tell what consumers in the cities need, or when the products we want have arrived at the stores in town. We have to keep calling the shopkeepers to find out, and phone networks in this area are patchy.”

Mathieu Le Bras is the founder of 8villages, a social network for farmers
This gap between the rural and the urban is where technology start-up 8villages saw an opportunity, using mobile phones.

“8villages is a business social network for farmers,” says founder and chief executive Mathieu Le Bras. “It provides them with a link to local buyers, their local sellers – and other farmers who are growing the same crop as them.”

Ade is one of 900 Indonesian farmers testing the product free.

“It allows me to access information about fertilisers, pesticides and the prices of crops,” he says. “So now when I need information, all I have to do is wait for an SMS from 8villages.”

The plan, according to Mr Le Bras, is to take this nationwide within the next six months – and even further, to farmers in Vietnam and the Philippines.

Close interaction
Mr Le Bras acknowledges he has drawn from his experience with social networks in urban markets – but insists there are already established networks in the countryside that his product is tapping into.

The peaceful Indonesian countryside – not your typical technology hotspot
“Social networks are paramount in the countryside,” he says.

That’s why 8villages has a service that allows farmers to enter a code on their mobile phones and access product reviews by senior farmers – taking the whole “like” concept offline.

Mr Le Bras says this is key to the success of the product, and why the farmers are now far more efficient.

“What we are doing with this is leveraging the social networks we know – like Wikipedia and eBay for example – and taking it online, so that the farmers have access to the knowledge.”

New consumers
It’s not just start-ups that are looking to tap the huge potential in the Indonesian countryside.

For that, farmers with a Nokia handset get a text message about crop prices and weather patterns, a service the company says had more than 600,000 users in Indonesia in 2011.

But Nokia’s country head Martin Chirotarrab says the plan is to keep expanding its reach in the countryside.

The 8villages system was tested by its eventual users – the Indonesian farmers
“We have over seven billion inhabitants in the world,” Mr Chirotarrab tells me at the Nokia headquarters in Jakarta.

“Roughly half of them have a device in their pockets. But only a billion of these consumers are on the web. Nokia’s plan is to connect the following billion consumers to the web.”

Both big businesses like Nokia and start-ups like 8villages want many of those new consumers to come from the Indonesian countryside, but this is unlikely to happen overnight.

Phone networks in many districts remain patchy, and telecom providers have yet to make it a priority to extend them.

But this is changing – although very slowly – because of the vast untapped potential that companies are now beginning to see in the Indonesian farmer.

New BlackBerry Q5 “kid brother of Q10” Out In July!

Apple and Samsung have been locked in patent litigation for years