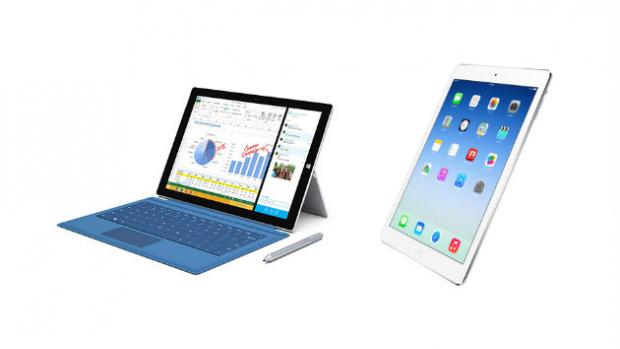 Can Microsoft’s multi-role slate offer you more than Apple’s iPad? We find out

Microsoft made a lot of laptop/tablet hybrid fans happy yesterday when it announced the new Surface Pro 3. The main theme behind the device can pretty much be summed up as bigger, better, and more, more, more. The Surface Pro 3 has a bigger display, better processors, more RAM, more storage, and more of everything that makes a tablet good.

Over the past two years Microsoft has attempted to break into the tablet space numerous times, its Surface line of hybrid machines were designed to replace both your laptop and your tablet (or, as Microsoft hoped, your MacBook and your iPad). This of course didn’t happen and Microsoft ended up losing hundreds of millions of dollars on its post-PC project.

The Surface Pro 3 couldn’t have happened without the failures of the two machines that preceded it. Microsoft was forced to learn some tough lessons over the past year or two, with regards to both Windows and its burgeoning hardware

aspirations, and the Surface Pro 3, at least on the surface, looks to show the company FINALLY making some headway.

The obvious question on everyone’s minds is how does the new Surface 3 compare to Apple’s flagship iPad Air? It’s a tough question to answer because the Surface 3 is actually designed to be a tablet and a laptop replacement–not just a tablet alternative. So how do the two stack up anyway?

The first thing you’ll notice about the Surface 3 versus the iPad Air is that the iPad Air is noticeably thinner and lighter. But the comparison isn’t exactly fair for a number of reasons.

First, the Surface 3 boasts a screen that is over two inches larger. The second reason is that the Surface 3 isn’t specifically designed to solely take on the iPad Air. It’s a hybrid device, which means Microsoft is positioning it as the perfect device for users who need the power of a laptop and the portability of a tablet. That’s why the Surface 3 has a 12-inch screen and an optional keyboard cover.

As for processor and RAM, the Surface 3 also comes out clearly ahead. It features an Intel Core 1.6 Ghz i3, i5, or i7 processor and 4GB or 8GB of RAM depending on your configuration. The iPad Air features Apple’s A7 chip and 1GB of RAM.

What all this means is that, spec-for-spec, the Surface 3 cleans the floor with the iPad Air. It’s got up to eight times the RAM and offers a wide range of processors to fill anyone’s needs. Of course these specs aren’t exactly fair comparisons either. The iPad Air isn’t designed to be a laptop replacement, so it doesn’t need all the extra power inside. A product better suited for component comparisons to the Surface 3 would probably be the 12-inch MacBook Air – something we’ll cover in a separate comparison.

The iPad Air has a Lightning connector on the bottom for charging and transferring data and a 3.5mm audio jack for plugging in headphones or external speakers. Inside it you’ll find 802.11a/b/g/n and Bluetooth 4.0, as well as GPS and, in select models, 4G.

The Surface 3 has a dedicated power charger on the side along with another coupling connector to attach an optional Touch Cover/Keyboard. It includes a full-size USB 3.0 port, a MiniDisplay port, and a 3.5 mm audio jack. Inside you’ll find Wi-Fi 802.11ac/802.11 a/b/g/n, and Bluetooth 4.0. Unfortunately there is still no 4G option.

In this area, the iPad Air beats the Surface 3 because it gives users the choice of 4G–something that is very important for a lot of people. But besides that the Surface 3 again cleans the floor with the iPad Air. It’s got all the connectivity options laptop users are accustomed to and adds the ports some iPad users with the iPad had (USB, anyone?). One thing we would say thought is that both use proprietary charging solutions rather than microUSB, which is at least midly irritating.

Keeping in mind that more than the megapixels of a camera matters in good photos, it’s still clear that the Surface 3’s cameras beat the iPad Air’s. The specs don’t lie: a 5MP front and rear camera on the Surface 3 makes it the tablet with the best camera options.

Okay, this is where you really begin to see the differences between the Surface 3 and the iPad Air. The iPad Air features iOS 7.1. The Surface 3 features Windows 8.1 Pro. There are well over half a million iPad apps. The Surface 3 on the other hand has a little more than 100,000.

Hands down, iOS 7 is the best mobile operating system on the planet. It’s got the apps, the security, and the ease of use. Windows 8.1 Pro on the other hand is a little laggy for my taste and a bit slow and prone to crashes.

However, when it comes to OSes on tablets, the Surface 3 has the power of the full Windows desktop behind it. You can run any Windows program on it just like you can on a standard Windows laptop. In this way, the Surface 3 offers much better software

than the iPad Air. It would be a dream if the iPad could also run OS X, but it doesn’t look like that will happen anytime soon.

So, which is right for you?

Despite the massive differences to the Surface 3 and the iPad Air, answering which is the right one for you is relatively straight forward. Are you a user who frequently carries a laptop and a tablet around with you? Or are you a user who just likes a good, solitary tablet experience?

If you long for the day when you can ditch your laptop or tablet and carry just one, the Surface 3 is the best option for you (provided you’re a Windows user). It’s loaded with the full version of Windows and packed with powerful specs. Getting the Surface 3 will allow you to carry just one device instead of two.

However, if you’re the kind of person who just wants the best tablet experience possible, get an iPad. Its design, user experience, and OS can’t be beat. And since most users nowadays just want to surf the web, check email, and post pictures, the iPad is more than enough for that.

So, power-user, or need a tablet and laptop for work: get a Surface 3. Casual user who uses a tablet for simple, fun tasks: the iPad Air is your best bet.

Windows Phone to overtake BlackBerry in UK this year