iPhone 12 lineup to start at $649; base variants will come with 128GB storage
Advertisement 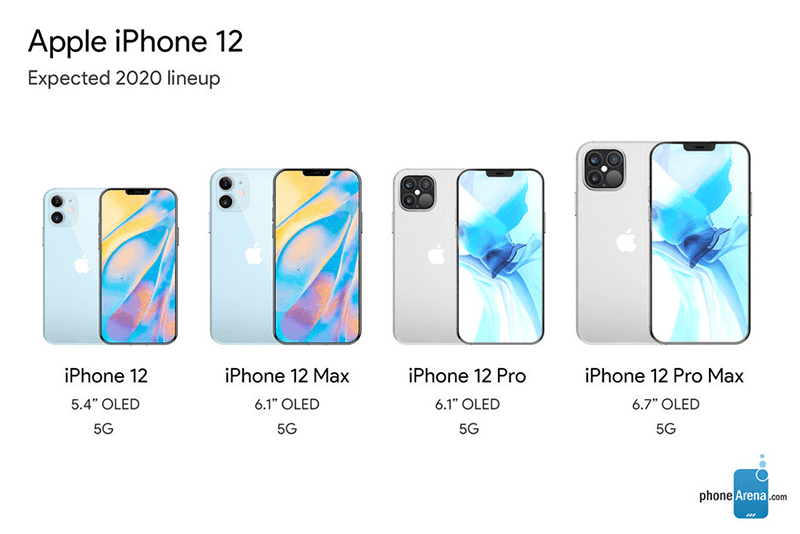 Over the years, a slew of leaks has preceded every major flagship release. Despite Apple’s secretive nature, some tidbits of information found a way out, much to the delight of fans and enthusiasts alike. Leakers such as Jon Prosser (FrontPageTech) have been instrumental towards bringing that information to us, and now, Prosser has another massive leak in store for us.

According to Prosser’s YouTube channel FrontPageTech, there will be four variants of the iPhone 12. As expected, all of them will come with Apple’s latest A14 chip and 5G support, something that Apple has been shying away from for quite some time. It’ll be interesting to see what 5G modem Apple uses, as earlier reports state that Apple will use Qualcomm’s X55 chip instead of its in-house solution.

Companies often differentiate between similar products by slapping on monickers like ‘Pro,’ ‘Lite,’ ‘Max,’ and so on. Apple did the same with its iPhone 11 series and is now further diversifying its portfolio (or confusing users even more) with said monickers. There will now be a total of four iPhone variants- the garden variety iPhone 12, iPhone 12 Max, iPhone 12 Pro, and iPhone 12 Pro Max. Whispers about the existence of four iPhone 12 models has been around for quite some time, and Prosser’s video gives further credence to earlier leaks.

The base iPhone 12 and the iPhone 12 Max will come with 5.4-inch and 6.1-inch screens, respectively. Both will come with BOE OLED panels with a refresh rate of 60Hz, a dual-camera setup, and 4GB of RAM. Prices will reportedly start at $649 for the former and $749 for the latter. There will be only two memory configurations; 128GB and 256GB. These phones are, for all practical purposes, ‘budget’ options for those who don’t want to spend four digits on a smartphone. Still better than what Samsung has to offer this year, though.

Moving on to the ‘Pro’ models, the iPhone 12 Pro and iPhone 12 Pro Max will come with 6.1-inch and 6.7-inch screens, respectively. They’ll be equipped with Samsung OLED panels that can be cranked up to 120Hz. The triple-camera setup will come with a LiDAR sensor. Additionally, both phones also get 6GB of RAM, and up to 512GB of internal storage. The iPhone 12 Pro Max will reportedly come with a 4,400mAh battery, a first for an Apple device. All of these exciting features come with a corresponding increase in price. The iPhone 11 Pro will start at $999, and the iPhone 11 Pro Max at $1099 for the base variant with 128GB of storage.

Prosser further adds that the iPhone 12 Pro and iPhone 12 Pro Max’s panels might not work at 120Hz at all times. iOS will ‘intelligently’ determine the screen’s refresh rate and adjust it accordingly, presumably to save battery. A toggle that lets users switch between the two modes would be ideal, but that seems unlikely.

To round things off, Prosser says that it’ll be a while before we, the consumers, can get out hands on the newest iPhones. The recent COVID 19 epidemic pushed things back, and Apple is likely to announce the phones in September, only to ship them out later in the year. If these prices are legit, then the new iPhones will certainly take Samsung to the cleaners. Let’s hope that it incentivizes Samsung to get the Galaxy S21 series’ price right next year.