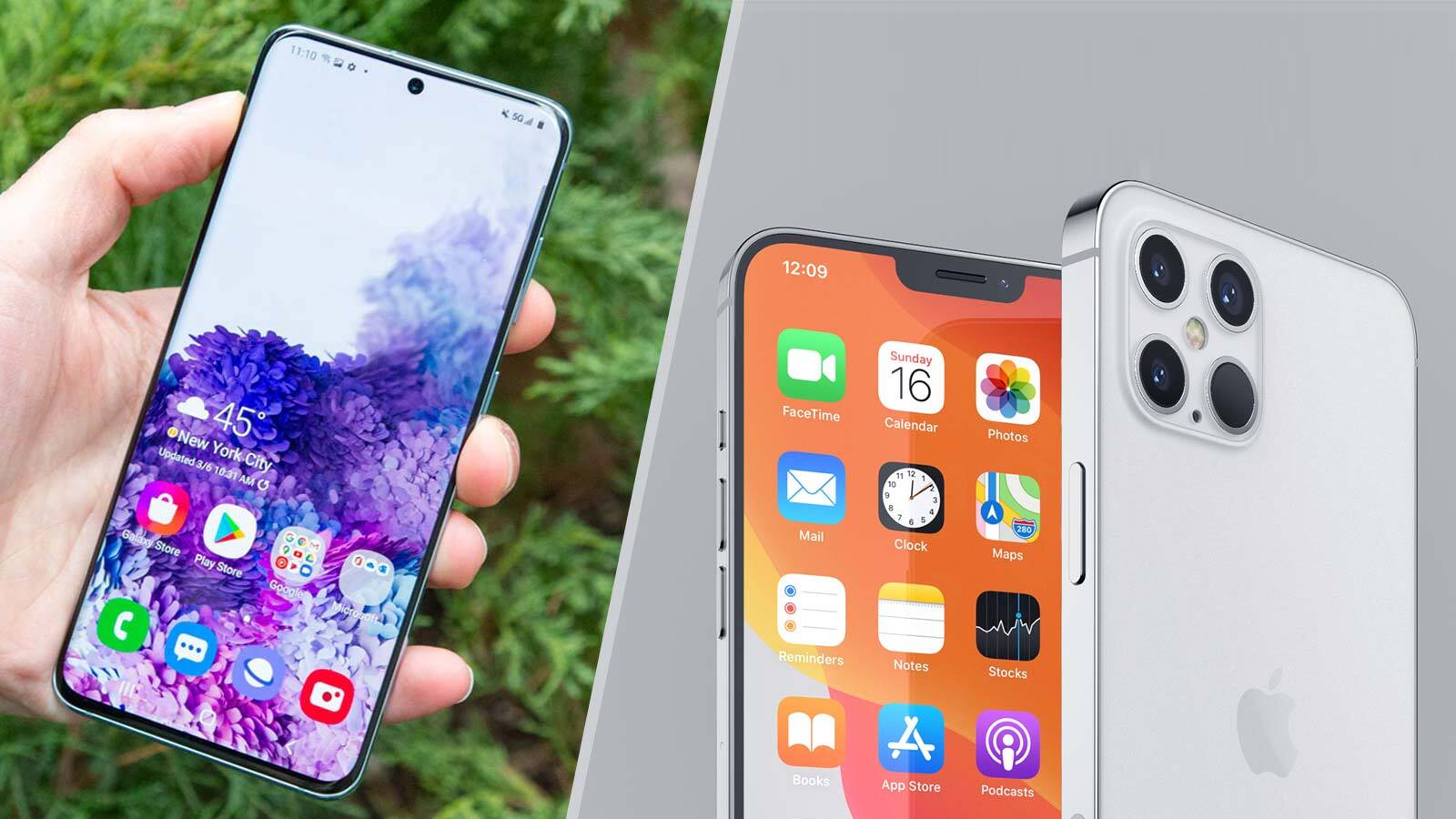 Some take phones like the OnePlus 8 or Poco X3 NFC as proof you don’t need to spend more than $1,000/£1,000 on a handset. But Apple and Samsung have their own good arguments for the very same idea.

The iPhone 12 Pro and Samsung Galaxy S20 are top-end phones from the two biggest names in mobile, but still cost less than a grand. And neither will stretch your pocket in the physical sense either.

They are reasonably sensible buys. But which is best? Let’s break it down.

The Samsung Galaxy S20 arrived more than half a year before the iPhone 12. It launched in February 2020, a naive pre-pandemic time. The iPhone 12 Pro was announced in October 2020.

Both base models have 128GB of storage.

Be careful when buying a Samsung Galaxy S20, though. While these are both 5G phones, there’s also a 4G version of the Samsung.

The Galaxy S20 and iPhone 12 Pro are both made using glass and metal, but there are some clear differences here.

Apple has reverted to the squared-off sides it used back in the iPhone 4 days. This reduces the iPhone 12 Pro’s footprint by cutting down the space taken up by those curves. These sides are steel, rather than the aluminum used in the Galaxy S20 and the lower-cost iPhone 12 and iPhone 12 mini.

Samsung’s approach is different, one that focuses on perception rather than dimensions. The Galaxy S20 has curved glass front and back panels, tapering to a relatively fine (but rounded) point at the parts you hold. It feels thinner than it is, and the Galaxy S20 is already fairly thin.

These phones are great buys if you don’t want a pocket-filling phone. Apple makes an even smaller one, the iPhone 12 mini, but these are already petite phones by today’s standards.

The iPhone 12 Pro continues to use the Lightning connector, the Galaxy S20 a universal USB-C. And both phones are water resistant to the IP68 standard.

This means a phone can be submerged at a depth of 1.5 meters for 30 minutes. However, Apple says the iPhone 12 Pro can actually go to a depth of 6 meters safely. This does not factor in the added pressure of movement underwater, so don’t go taking your iPhone on a snorkeling trip.

Only the Galaxy S20 has a fingerprint scanner, an in-screen one. But the iPhone 12 Pro has superior face recognition, using the extra hardware packed into its notch.

Apple has also brought back MagSafe, the old much-missed charging standard of older-gen MacBooks. Trip over the cable and it would disconnect rather than dragging your laptop to the floor.

MagSafe in an iPhone 12 Pro means a magnet around its wireless charging ring. It’ll be used both to hook up to wireless charge pads and to clip-on cases. That’s not revolutionary in our book, but if it means you can take a case on and off without eventually creating cracks in its sides, we’ll be happy.

Some of you will prefer the Galaxy S20’s curved-edge screen. It certainly looks glossy. However, it also gathers reflections, which can be distracting.

The Galaxy S20 also has a much higher maximum refresh rate. It can be set to 120Hz or 60Hz. The higher setting makes menus and webpages scroll more smoothly, although it does reduce battery life and reduces the phone’s render resolution.

Apple’s iPhone 12 Pro has a bog-standard refresh rate of 60Hz. Its notch is also hard to ignore, compared to the tiny little punch-hole of the Galaxy S20.

There are a few display benefits to the Apple phone. It has higher peak brightness, of a claimed 1200 nits to the Galaxy S20’s 850-ish nits.

Its display glass is stronger too. The iPhone 12 Pro has a new kind of Corning glass with a layer of transparent ceramic crystals on its surface. Ceramic is harder, and therefore more scratch resistant, than the Gorilla Glass 6 (also made by Corning) of the Galaxy S20.

Which phone wins? The Galaxy S20 has a higher-end screen, but in person you’re most likely to appreciate the punch of OLED’s contrast and the excellent color calibration. Both phones have this.

In most areas this comparison breaks down to a case of small benefits shining through based on your personal priorities. But not so in chipset and raw performance.

The iPhone 12 Pro is a significantly more powerful phone, especially if you reference the UK/Europe version of the Samsung Galaxy S20.

Samsung uses the Snapdragon 865 processor in its US Galaxy S20 phones, and the Samsung Exynos 990 elsewhere. The Exynos is the weaker of the two, in terms of GPU performance and efficiency.

We haven’t tested a device that uses the iPhone 12’s A14 Bionic processor yet, but Geekbench 5 results suggest it is a monster. Multi-core scores of around 4200 points easily beat the 3000-3100 you’ll see from a Galaxy S20. That score lowers to around 2650 in the Exynos variant.

We would question how much raw performance like this should actually matter to most people, though. A game like Fortnite is among the most demanding on either platform, and it will run perfectly well on both phones.

The Samsung Galaxy S20 and iPhone 12 Pro both have three rear cameras.

They offer a great 12MP primary camera and an unusually good 12MP ultra-wide with a field of view of around 120 degrees.

The iPhone 12 Pro has a 2x optical zoom. You may have seen Apple reference ‘4x’ range, but this means the zoom is ‘4x’ if you take the 0.5x ultra-wide camera as the starting point. Cheeky.

The Galaxy S20 does have a zoom, and a very welcome one, but it is not the best around. It uses a 1.1x optical zoom and 64MP sensor, so every zoomed image is based on a combination of optical and digital techniques, mostly the latter.

While the S20 offers greater max digital zoom than the iPhone, 30x to Apple’s 10x, we hope to see slightly better results from the iPhone 12 Pro.

Apple has some claim to better low-light capability in the iPhone 12’s main camera, as it has an f/1.6 lens to the Galaxy S20’s f/1.8. However, these days true night shooting is all about computational photography.

This is where multiple exposures are merged to create a final image with dynamic range, detail, and color fidelity that otherwise just would not be possible with a phone-size sensor.

Apple says its Night mode is better than ever, but we’ll have to use the iPhone 12 Pro and Galaxy S20 side-by-side before making any firm conclusions.

Pre-iPhone 12, Apple’s latest phones had very good low-light image quality, but they were not quite the best around at preserving highlights at night. Let’s hope this has been improved.

We can make some solid predictions about general image handling, though. Samsung tends to oversaturate colors for a punchy effect, while Apple is more measured. Apple also claims to have improved its already-excellent HDR processing, which we look forward to trying out.

The Samsung Galaxy S20 can shoot 8K video, but it was only with the Galaxy Note 20 Ultra that Samsung really nailed this feature. 8K video’s panned motion can look juddery in the S20, so it’s best used for tripod shots or if you’ll hold the phone fairly still.

The iPhone 12 Pro can shoot in Dolby Vision HDR at up to 60fps, a feature we are dying to try out. There’s also a Night mode time-lapse, which should be able to produce stunning results.

Apple also introduced ProRAW with the iPhone 12 Pro range, a version of the unprocessed RAW images you might take with a DSLR. They offer a ‘best of both worlds’ solution. You get the suggested JPEG-style processing of Apple’s imaging engine, not a flat image, but each parameter is fully editable. The processing is embedded into the RAW file, but separately from the pure image data.

The instant punch of a JPEG plus the ability to retrieve more highlight and shadow detail, and do so right there on your iPhone: what’s not to like there?

Wait for our full review to see what we think of the iPhone 12 Pro’s battery. But Apple’s claims suggest it will last just as long as the iPhone 11.

This is smaller than the Galaxy S20’s 4,000mAh battery, but in real-world use we find the iPhone 11 outlasts the Samsung. With any luck the iPhone 12 Pro will too.

Both phones have ‘fast charging’, but neither is particularly fast compared to the 60–120W maximum seen in phones from companies like Xiaomi, Vivo and Oppo. Samsung and Apple aim for the “50% in 30 minutes” bronze standard, where other phones can now be fully charged in that time.

The iPhone 12 Pro doesn’t come with a charger, though, and you’ll need a 20W+ one to see the best results.

Each supports Qi charging at up to 15W, but the iPhone 12’s MagSafe rear magnets will also snap accessories into place. No more searching for the Qi hotspot.

If you simply want the most tech per dollar you can possibly get, the Samsung Galaxy S20 seems the best choice in this fight. It has a longer-range zoom camera, a higher-resolution screen, an in-screen fingerprint scanner, and a 120Hz refresh rate. And it now costs significantly less than the iPhone 12 Pro.

However, we recommend waiting for our full iPhone 12 Pro review if this is the exact decision you are currently mulling over.

The iPhone 12 Pro’s Dolby Vision HDR video and Night mode improvements, as well as suspected superior battery life, could make it a more rewarding phone to use day-to-day.