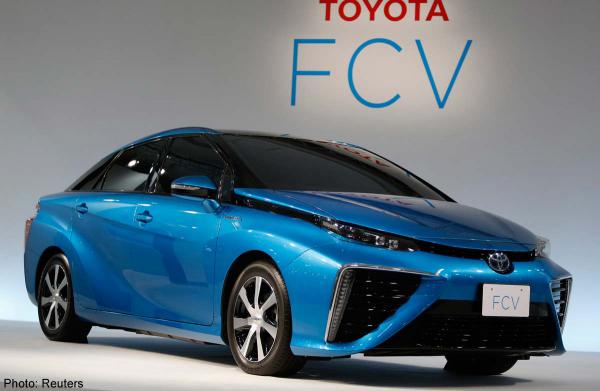 TOKYO – Japan will offer at least 2 million yen (S$24,485) in subsidies for fuel-cell vehicles, Prime Minister Shinzo Abe said according to media, as the government and Japanese carmakers including Toyota Motor Corp join forces to speed up the introduction the vehicles.

The subsidy would mean that consumers would pay about 5 million yen for Toyota’s fuel-cell sedan, which is set to go on sale by the end of March 2015 and priced at about 7 million yen.

Abe, who visited a hydrogen station and test-drove fuel-cell cars on Friday, vowed to back the technology through subsidies and the purchase of the cars by government agencies.

“This is the car of a new era because it doesn’t emit any carbon dioxide and it’s environmentally friendly,” Abe told reporters. “The government needs to support this.”

Abe’s growth strategy promotes the use of hydrogen energy and fuel-cell cars, which use hydrogen as fuel and run on electricity from cells that combine hydrogen with oxygen and emit only water vapour and heat, though some carbon dioxide is emitted when hydrogen is produced from hydrocarbons.

Honda Motor Co is also set to start selling its fuel-cell vehicle in 2015.

Both the government and many industry experts reckon the technology could take decades to become widely used partly because of the costs of building up infrastructure of hydrogen fuel stations.

How Samsung Galaxy S5 4G is different from Galaxy S5