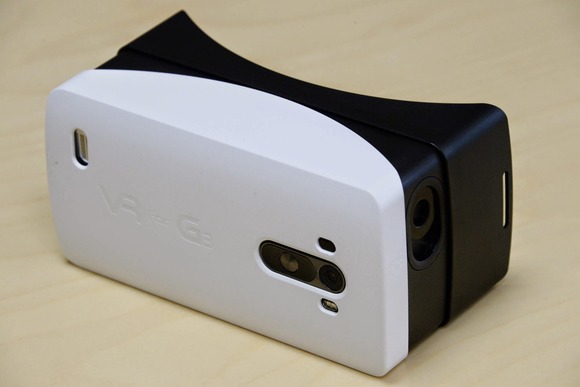 LG is jumping into virtual reality (sort of), giving away a Google Cardboard-inspired headset for those who buy its G3 smartphone.

It’s one of those limited time offers that may sweeten the deal if you’re looking for a new Android phone—our LG G3 review found it to be a pretty solid choice.

Google makes its Cardboard design open source, so LG chose to use that for its own headset, opting for plastic instead of recyclable corrugated paper.

Just like the Cardboard version, LG’s virtual-reality hardware includes a neodymium ring magnet on the side, which pairs with the G3’s internal magnetometer. This way you can control the phone without the need to touch the display.

The build also includes a cutout for LG’s volume rockers on the back of the phone, so you can still adjust the sound while using it. There’s another cutout for the speaker, so nothing gets muffled while checking out a game or virtual reality app.

Along with the VR gear you also get a free code for RoboBliteration, an Android game designed exclusively for playing with virtual reality headsets.

LG says the promotion should roll out throughout February, so keep an eye out for it at your favorite carrier.

Why this matters: LG is the chief Korean competitor to Samsung, which has been going all-out with its own Gear VR headset. It’s unclear if this represents a more direct push into virtual reality or a one-off promotion to clear out some inventory before the G4 hits the scene. Either way, it’s worth watching if LG decides to sell its headset directly or builds another model for use with additional devices.

Microsoft buries the hatchet with Samsung