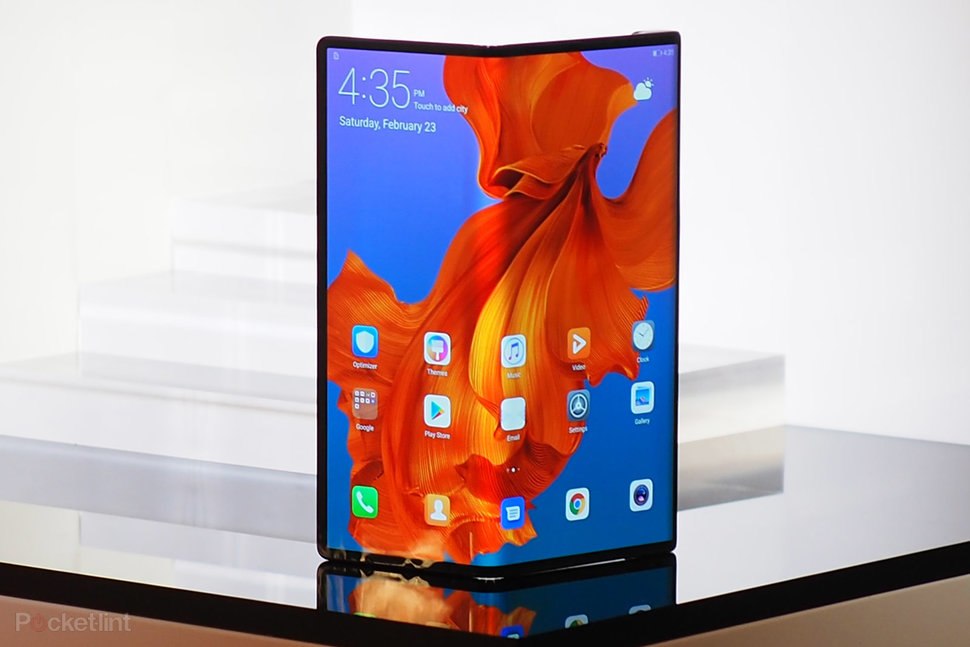 Huawei wants its turn in the foldable phone spotlight, and with the Mate X, it makes a convincing — but expensive — audition. The main competition: Samsung’s Galaxy Fold phone, which has two screens, six cameras total and unfolds in the center to open into a 7.3-inch tablet. Huawei’s Mate X — that’s pronounced “ex,” not “ten” — has three ways to use on 8-inch screen, four cameras (three you can see, one that’s temporarily hidden) and an interesting design that gives you a grippable base for one-handed use.

Foldable phones present a chance to shake up a coasting industry while also effectively doubling the amount of screen space you have to use on your phone. Because foldable phones are phone-tablet hybrids, they can command a higher price, which opens up an important revenue stream at the top end for companies looking to make a greater profit in a slowing market. But this new era of bendable screens also represents the wild west of phone design: A phone could fold inward or outward, down the center or on two sides, or even bend back around your wrist like a watch. At this early stage, companies are working out what a foldable phone means. Right now, anything goes.

Huawei’s vision for the Mate X is of a phone you mostly use in its “closed” position, but open up when you want to be entertained or more productive. There’s a screen on the back that could be useful for taking selfies: The phone’s four rear cameras have been codesigned with Leica.

The “main” screen configuration is a 6.6-inch display that Huawei thinks you’ll use most. Unfold it outward to get an 8-inch edge-to-edge OLED display with no notch (there is a camera, though). When it’s folded up, the back is a slightly smaller 6.4-inch screen and a sidebar with the rear camera array. In the open position, the sidebar becomes a grippable handle, which Huawei whimsically calls the “Falcon Wing” design because of its swooping shape. The idea is to hold the Mate X one-handed, and use your other hand to tap and swipe. Fold the phone closed again and one side aligns with the handle to give it all a flat look. And yes, there’s still a bendable hinge.

My colleague Roger Cheng had hands-on time with the phone, noting that even though the phone is large it feels light, but it will definitely be a two-handed experience. Here are his thoughts:

The Mate X closes flush as promised, with little gap between the two sides of the phone. Folding the phone is a little scary, and the movement is a little stiff, but Huawei consumer CEO Richard Yu says it’s tested for 100,000 folds. When it’s closed, the phone knows which side of the device you’re facing. It’ll automatically flip sides when you face it.

For such a large device, it feels pretty light. The spine housing the camera works as a pretty good ergonomic handle when unfolded. But good luck folding it with one hand — I almost dropped it. When folded, it did feel a little thick. There’s a bulkiness to it that’s unavoidable.

Apps seem to run smoothly. Like with the Galaxy Fold, the phone automatically shifts your app to the bigger display when the you unfold the screen. I saw CNN, Chrome and YouTube on the device, all running smoothly and taking advantage of the bigger screen.

The demo unit they’re showing has three cameras. But the completed phone will have a fourth camera that will be shown off with the P30 next month.

Huawei has also made a case that will cover the Mate X’s sides and back in its folded form, leaving an open window for the 6.6-inch display. In some countries, the case might come in the box.

5G speeds are a big talking point for Huawei, and the Mate X uses the company’s in-house Kirin 980 processor and Balong 5000 5G modem chip. Right now Huawei says that the Mate X will download content four times faster than the current 4G connection, so about 1GB in 3 seconds. The Oscar-nominated film Roma on Netflix is under 700MB to download, so that would theoretically download to the Mate X in roughly 2 seconds.

The Mate X has the Galaxy Fold outpaced when it comes to battery capacity, with a 4,500-mAh capacity split between two batteries, one on either side of the folding screen. Samsung’s Galaxy Fold has a total of 4,380-mAh capacity available between its two lobes. As we know through testing, raw capacity gives you the upper hand, but we won’t know which has better real-life performance until we test them side by side.

Huawei has a lot of details to fill in about the phone, and we’ll update this piece as we learn more from Huawei on Sunday at the Mate X’s official launch event. But right now, Huawei is coming after the Galaxy Fold, with an aim to generate even more buzz than its No. 1 rival.

5G and foldable phones go big at MWC 2019: With international intrigue and a 5G coming-out party, this show doesn’t need the boost of a Samsung event.