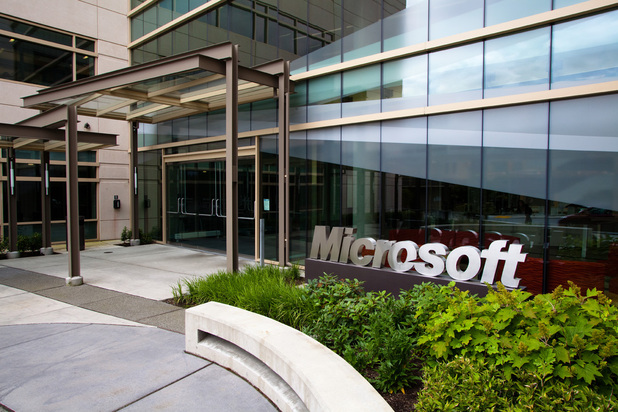 Big jumps in sales of its Surface tablets, cloud computing software and Lumia smartphones drove Microsoft’s quarterly revenue above expectations, as CEO Satya Nadella continues to steer toward the mobile gadget market and shift Microsoft away from its traditional focus on the PC.

Revenue from cloud computing products, in which businesses pay to use online software housed in Microsoft’s data centers, more than doubled. The division is now on track to bring in $5.5 billion in sales this year. Surface revenue spiked 24 percent to over $1 billion. Another big seller? Xbox — which sold 6.6 million consoles in the holiday quarter. And while profit dropped on big charges for layoffs, other restructuring efforts and integrating the Nokia phone business, Microsoft’s earnings matched Wall Street estimates.

So why is the stock down over 4 percent after-hours?

BGC Partners analyst Colin Gillis said investors are reacting to results in Microsoft’s “core” business of Windows software, which he called “not great.” While Nadella is pointing Microsoft toward mobile, the Redmond, Washington, company still relies heavily on selling Windows software for PCs. And that flagship business is struggling as global shipments of personal computers have fallen for the last ten quarters in a row, according to research firm IDC.

“The PC isn’t dead, but people are much more mobile and they don’t spend all their time on their PC,” said Anthony Clendenen, a tech expert at En Pointe, a California firm that helps businesses buy and install commercial software from Microsoft and other companies.

Microsoft’s Windows licensing revenue dropped 13 percent during the period, partly due to weak PC sales in China and Japan. The company also is no longer enjoying an overall boost in sales that came last year when it stopped providing support for the older Windows version known as XP. The end of XP support drove many consumers and businesses to buy new PCs equipped with newer versions of Windows.

Gillis said “the cracks in the core business have people realizing, ‘Oh gee, there’s going to be a transition,’ ” that will take some time. Nadella’s strategy of building new business segments is sensible, “but those types of strategies don’t come without some bumps in the road,” he added.

All told, Microsoft’s net income fell more than 10 percent to $5.86 billion for the three months that ended Dec. 31, due to hefty costs. Revenue rose 8 percent year-over-year to $26.47 billion, including more than $2 billion in sales from the Nokia smartphone business it acquired last year. Earnings per share of 71 cents matched expectations of analysts surveyed by FactSet. Revenue of $26.47 billion edged past the $26.3 billion analysts expected.

Looking ahead to fiscal third-quarter results, Chief Financial Officer Amy Hood said on a conference call with analysts that a strong dollar will dent revenue by 4 percent.

All eyes will be on the launch later this year of Windows 10, the next version of Microsoft’s flagship operating system. Designed to be equally familiar and easy to use on PCS and mobile gadgets, Nadella is hoping Windows 10 will capture both consumers and the developers who create apps for phones and tablets. Also up: Tech wizardry in the form of HoloLens computerized glasses — built on Windows 10 — that let wearers see and interact with three-dimensional holograms. It’s one more way Nadella is showing he wants to change the perception of Windows for the mobile generation, said analyst Daniel Ives of FBR Capital Markets.