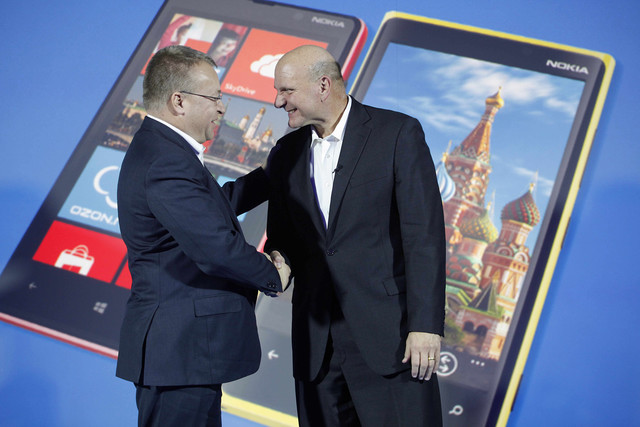 The deal changes the nature of both companies. Nokia is exiting from the mobile-phone business it once dominated, leaving it mainly as a network equipment maker. Microsoft, which became the world’s largest software maker on the back of its Windows operating system, is moving aggressive into hardware.

Pedestrians pass a giant smartphone in the window display of a Nokia Oyj store in Helsinki. Photographer: Henrik Kettunen/Bloomberg

A customer inspects a Nokia Lumia 900 smartphone from a display inside a mobile phone store in Helsinki. Photographer: Ville Mannikko/Bloomberg

Nokia shares jumped as much as 48 percent in Helsinki trading. Microsoft is making its biggest foray yet into hardware as sliding personal-computer sales threaten the demand for Windows, and Nokia’s cash flow has been weakened as it loses market share to Apple Inc.’s iPhone and Google Inc.’s Android platform. While Microsoft Chief Executive Officer Steve Ballmer and Stephen Elop, his Nokia counterpart, called the deal a “moment of reinvention,” analysts aren’t so sure of its prospects.

“Both Nokia and Microsoft really missed the boat in terms of smartphones, and it is extremely difficult to claw your way back from that,” said Paul Budde, a Sydney-based telecommunications consultant. “The question is whether combining two weak companies will get you a strong new competitor. It’s doubtful.”

With the deal, Microsoft becomes the last major developer of smartphone operating systems to get into the manufacturing business. Apple makes its own handsets, which use its iOS operating system. Google acquired Motorola Mobility last year for about $12.4 billion, giving the company its own lineup of phones.

Yet the deal also raises questions as to whether Microsoft and Nokia will prop each other up or weigh each other down. Microsoft’s other recent significant move into hardware, the Surface tablet, sold below expectations so that it had to take a charge to write down inventory last quarter.

The deal also brings Microsoft’s CEO succession into the spotlight. As part of the purchase, Elop — formerly a Microsoft executive — will return to the Redmond, Washington-based company. Ballmer declined to say whether Elop would now become, or had already been, a candidate to succeed him as CEO.

Chairman Risto Siilasmaa will become interim CEO of Espoo, Finland-based Nokia. About 32,000 Nokia employees will also transfer to Microsoft. The devices and services business generated about 50 percent of Nokia’s net sales during 2012, worth an estimated 15 billion euros, the companies said.

The deal is the largest for a wireless device maker after Google’s purchase of Motorola’s handset unit completed in May 2012, according to data compiled by Bloomberg.

Microsoft agreed to pay about 0.35 times annual revenue compared with the median of about 1.4 times for 60 wireless equipment-maker deals tracked by Bloomberg. That also compares with the 0.77 times revenue Google paid for Motorola Mobility, the data show.

Google paid about 1.3 times annual operating income for the handset maker, while Nokia’s device and services business reported an operating loss last year, according to the data.

Ballmer called Nokia chairman Siilasmaa shortly after the new year to initiate discussions on an acquisition and the two met in February at tradeshow Mobile World Congress, according to a Microsoft spokesman. Talks heated up in recent months and a deal was completed before Ballmer announced his retirement last month, he said.

For Microsoft, the deal including the payment to license Nokia’s patents is its second biggest behind the $8.5 billion purchase of Internet telephony company Skype in 2011.

Microsoft will face a balancing act owning Nokia and keeping its other hardware partners, including HTC Corp. and Samsung Electronics Co., committed to its Windows Phone. Aiming to reassure other phone makers that Microsoft will still support them, Ballmer said today that the company was “100 percent” committed to helping its manufacturing partners.

The deal also pushes Microsoft into manufacturing facilities and workers, an area outside its expertise. The company has relied on contract manufacturers for products like Xbox, Surface and the chips in the Kinect motion sensor. It’s an area that has proved challenging for Google since acquiring Motorola as well.

After the sale to Microsoft, Nokia’s biggest business will be its unit selling wireless-network equipment to mobile-phone carriers, called Nokia Solutions and Networks. The unit has struggled amid intensifying competition from Sweden’s Ericsson AB and China’s Huawei Technologies Co. and ZTE Corp. The NSN division started a program in late 2011 to cut 17,000 jobs, or about 23 percent of its total.

Nokia said it will also keep its mapping and location services business, called Here, and its technology development and licensing division.

“After a thorough assessment of how to maximize shareholder value, including consideration of a variety of alternatives, we believe this transaction is the best path forward for Nokia and its shareholders,” Chairman Siilasmaa said in a statement.

Microsoft and Nokia have had a close relationship through Elop, who had run Microsoft’s Office unit. He left the software maker in September 2010 to take the top job at Nokia.

At the time, Elop likened his company’s mobile position to a man standing on a burning oil platform on the verge of being engulfed in flames, facing the option of staying aboard or jumping to the ocean to have a chance to survive.

In February 2011, Elop struck a deal with Ballmer to switch Nokia’s smartphones from its own Symbian operating system to Windows Phone. In exchange, Microsoft ponied up more than $1 billion dollars to pay for Nokia marketing and developing products on Windows.

Yet Nokia has lost more than 5 billion euros in nine quarters as Elop’s comeback bid hasn’t reversed market-share declines. Nokia’s basic phones are losing users to Chinese rivals and new smartphones have failed to stop shoppers from picking up Samsung and Apple devices.

Nokia had the largest share of the mobile phone handset market until it was overtaken by Samsung in 2012, according to data compiled by Bloomberg.

Still, Nokia remains a top seller of traditional mobile phones — models that are more popular in developing markets. In total phone shipments, the company ranks second to Samsung among device manufacturers. Samsung accounted for 26 percent of shipments last quarter, while Nokia had 14 percent. Apple came in third with 7.2 percent.

In January, Elop suspended the company’s dividend in an attempt to improve its finances. Nokia reported in July a 27 percent drop in the number of handsets sold in the second quarter.

Nokia and Microsoft previously discussed Microsoft buying the handset business and made progress before talks faltered, The Wall Street Journal reported in June.

Some analysts applauded the deal. “Nokia has a highly evolved device design and manufacturing process which will benefit Microsoft greatly,” said Al Hilwa, an analyst at research firm IDC. “This is simply the fastest path in front of Microsoft to achieve something like Apple’s vision on devices.”

In total, Android accounted for 79 percent of the global smartphone shipments last quarter, followed by Apple’s iOS with 13 percent, according to IDC. While Microsoft’s Windows Phone had just 3.7 percent of the market, it was the fastest-growing operating system during the period.

Microsoft said it is confident of getting the deal approved by early 2014. The transaction will shave 12 cents a share, or 8 cents excluding some items, off earnings in the current fiscal year, Microsoft said in a slide deck. In 2015, the cost will be 6 cents based on generally accepted accounting principles. Excluding some costs, the deal will add to profit that year.

To break even on an operating basis, Microsoft will need Nokia to sell about 50 million smartphones a year, the company said in the slide presentation. Nokia currently has a run-rate of about 30 million units.

The agreement allows Microsoft to bring in more money, more than $40 a unit for smart devices, compared to the less than $10 in gross profit that the company currently gets for every Windows Phone sold by Nokia, Microsoft said in the slide show. That’s before the costs of developement and marketing, however.

Microsoft said the transaction will add to earnings that comply with generally accepted accounting principles in fiscal 2016. The company expects to have annual cost synergies of $600 million about 18 months after the deal closes.

“It’s a bold step into the future — a win-win for employees, shareholders, and consumers of both companies,” Ballmer said in a statement. The deal will “accelerate Microsoft’s share and profits in phones,” he said.

How Windows, OS X, and Ubuntu are slowly turning your PC into a smartphone