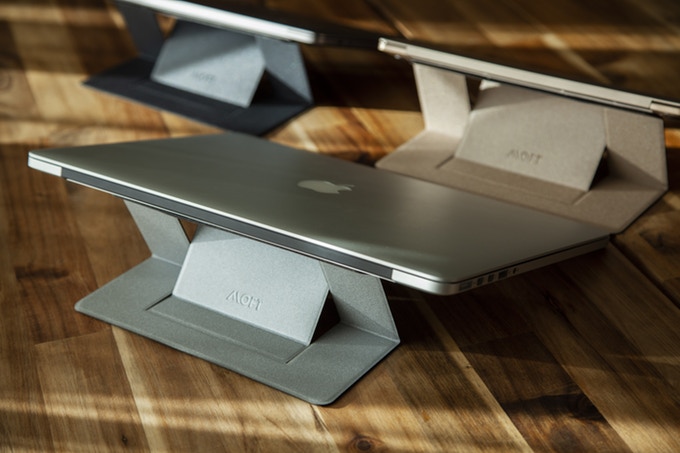 The laptop is a great tool for working. But its low screen positioning and fixed keyboard forces users into awkward postures, causing neck-and-shoulder pain and diminished comfort.

Problem is, the traditional laptop stand is too bulky to carry around and often takes a lot of time to set up – turning it into a productivity-killer.

We set out to make sure every road warrior can work absolutely anywhere with ease and comfort. That’s where MOFT comes in. It’s lightweight, portable, convenient, patented and feels “invisible” ——that it is MOFT invisible stand.

We truly believe“Good design is invisible” and put this philosophy into creating MOFT: unseen when attached, unfelt when worked on, unnoticed when carried.

You will never be troubled by forgetting to take a laptop stand when going out, because MOFT acts as a natural, seamless appendage of your computer.

Nothing extra, only simplicity and reliability. Everything is “feeling right”  and you don’t even notice it.

We’re super excited to get an honest review from Unbox Therapy, Thank you!

It’s very easy for you to use MOFT stand and only takes One Second to open and close it. so you won’t have a frustration of spending much time on packing and unpacking the device.

Plus, MOFT is always with the Laptop, so you have the same mobility you are used to.

Weighing a mere 2.3 oz. and only 1/9” thick, you just might forget you’re carrying MOFT around with you. And for the benefits MOFT stand provides as a mobile workstation, its small measurements are that much more impressive!

MOFT stand is constructed with unique PU and fiber glass material, meaning it’s as strong and stable as other bulkier stands at a fraction of the size! It can hold up to 18 lbs.

It’s compatible with a wide range of Laptops – Fits up to 15.6″ Laptops

With built-in magnets, you can unfold MOFT stand quickly and it securely attaches to the flat surface.

MOFT stand is equipped with two elevation adjustments, making it easy to find the ideal height and comfort.

The high-lifting mode significantly optimizes on your sitting posture, applying a 3 inches elevation to your computer screen.

The low-lifting mode soothes your wrist when typing and can be perfectly adoptive to standing desks.

MOFT stand’s removable glue lets it conveniently attach and detach from your laptop without leaving a single mark or scratch, re-attaching with the same strong effectiveness.

How to clean the dirt off the glue pad?

MOFT stands for “Mobile Office for Travelers”. A collective focused on creating innovations that boost productivity from a variety of angles.

As a multinational team with people aged from 23 to 33, we are on our computers at least eight hours a day, often on our laptops in a mobile state – from airplanes to rail, from cafes to parks, anywhere and everywhere.

And that has caused several of us to suffer from serious physical problems, specifically cervical spondylosis. We have tried many laptop stands on the market, but we are not satisfied with them.  They are often a burden to carry around and a chore to set up, and sometimes,  you may always forget to bring it.

So, we decided to develop an easy-to-carry, lightweight laptop stand that was sturdy, ergonomically superior and aesthetically seamless.

Over the following three years, we spent time, effort and expense researching and then creating several prototypes, until we produced a laptop stand we wanted ourselves. And not only that, friends of ours wanted it! We were on to something.

From there, we made a number of crucial improvements to the angle, material and craftsmanship in an effort to reach laptop stand perfection.

In that process of creation and refinement, we also became determined to make the eventual retail price as low as possible.

With this entire package of quality, innovation and affordability finally coming together, we decided to bring MOFT to Kickstarter, and to the people.

We are excited and proud to present MOFT laptop stand to you. We hope that all our research, work and creativity has produced a product that will change your mobile life for the better. Your support is greatly appreciated.

A Special Thanks To

This campaign is promoted by LemoreLab. Since 2015, LemoreLab has successfully helped creators crowdfunded over $10,000,000 from 30,000+ backers.

This project is promoted by Jellop, the ad tech power behind the best Kickstarters with 600+ successful Kickstarter projects with over $300MM raised between them.

We understand and acknowledge that no project comes without risks and challenges. Despite our planning, there are circumstances that may be out of our control. If we are met with these events, we promise to communicate with full transparency to you, our backers, and work to resolve all issues in a timely manner.

How Big Data Technology like Hadoop is used in Healthcare Industry?