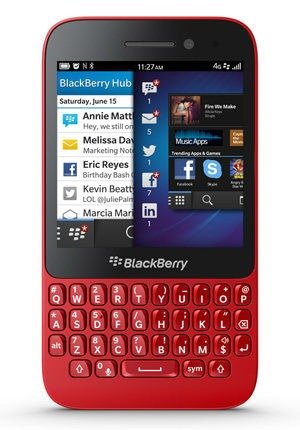 As the BlackBerry Live keynote news keeps flowing in I’m happy to introduce you to the youthful and fun BlackBerry Q5 smartphone, running BlackBerry 10. With a QWERTY keyboard and a confident design, this new BlackBerry smartphone has been built to provide a fast, effortless experience that helps you explore, create and share while on the go. Thorsten Heins just revealed the device onstage at BlackBerry Live, but we’ve got all the details ready to share with you below.

I’ve been using this device for a few days now and I’m already in love. It fits into my lifestyle perfectly offering the powerful experience I need and allowing me to flow seamlessly from task to task throughout my day.

Highlights and features of the BlackBerry Q5

Differences Between The New BlackBerry Q5 & Its Q10 Big Brother

BlackBerry has been kind enough to detail out the differences between the BlackBerry Q5 and its higher end BlackBerry Q10. Now that the Q5 is rolling out its nice to see the similarities and note the differences. The main two differences in my opinion is the 8GB of storage instead of 16GB along with the CPU going down from a dual core 1.5Ghz processor to the dual core 1.2Ghz processor in the Q5. The other things to note is that NFC is market dependent so not all devices will have it and the Q5 does not have a HDMI out port. It also has a lower end 5MP camera compared to the Q10’s 8MP camera. Here are the main hardware differences:

In other words BlackBerry made a pretty compelling low end device for developing countries without sacrificing key functionality. Personally I would have preferred them keeping the CPU the same along with NFC but what can you do…

Here’s what Thorsten had to say in a recent press release on the new BlackBerry Q5 smartphone:

“BlackBerry is excited to bring the new BlackBerry Q5 smartphone to our customers in selected markets around world,” said Thorsten Heins, President and CEO of BlackBerry. “The BlackBerry Q5 gives you the best of everything with its cutting-edge BlackBerry 10 functionality and a physical QWERTY keyboard. It is for youthful fans that are passionate, confident and bold, and it makes it easy for them to have fun, create, share and stay connected.”

Pricing and Availability
The new BlackBerry Q5 smartphone will be available in selected markets in Europe, the Middle East, Africa, Asia (including the Asia Pacific region), and Latin America, with availability beginning in July.

There you have it folks – if you live in the areas listed above, you can look forward to getting your hands on the new BlackBerry Q5 with BlackBerry 10. What do you think of this phone? Let us know your thoughts on this stunning new BlackBerry device in the comments below.