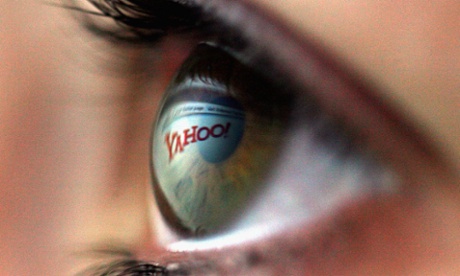 When Marissa Mayer showed up for her first day of work at Yahoo on the morning of July 17, 2012, she was greeted by the company’s shy cofounder David Filo, who made a show of unrolling a “large purple carpet” to lead Mayer into the office building. After walking through the doors, she saw signs welcoming her, a crowd of employees gathered to greet her and loads of gifts inside her office.

Business executives and politicians, including a White House official, had left voicemail messages to congratulate the new Yahoo CEO. NBC’s Today wanted an interview. Employees greeted her like a savior, with one hanging a poster of Mayer’s face above the word “Hope,” imitating the famous Shepard Fairey illustration of Barack Obama.

Everyone seemed fascinated in and optimistic about the smart, young, tech-savvy former Google executive who had just been added to the far too short list of women running multi-billion-dollar public tech companies. But like all honeymoons, this one wouldn’t last.

In Marissa Mayer and The Fight to Save Yahoo!, a new book out this week, Business Insider‘s chief correspondent Nicholas Carlson offers the captivating inside story of Mayer’s rise at Google, the hype around her hiring at Yahoo and the missteps in her first two years as CEO that raised concerns among employees and investors alike. [Full disclosure: Carlson was my boss when I worked at Business Insider.]

The book, which began as a long feature article published in 2013, was done without the cooperation of Mayer or Yahoo and is instead based on interviews with friends, teachers and colleagues from Yahoo and Google. It presents Mayer as a very smart — though perhaps not quite visionary — executive who struggles to relate to people and relies heavily on data, except when it matters most.

Mayer pushed to hire big name media personalities like Katie Couric and expand into more premium content without any evidence that such moves would connect with Yahoo’s audience. Several of the top executives she hired were people who reached out to her rather than the other way around. One of those, Henrique De Castro, talked a particularly good game and was apparently hired for a huge sum of money without being vetted at all by Mayer’s Yahoo. He completely failed to boost display ad sales and was ultimately pushed out of the company after just 15 months, costing the company tens of millions.

To her credit, Mayer succeeded in reenergizing Yahoo employees, speeding up product development and devoting more attention to mobile, an area that was sorely lacking in resources prior to her arrival. But as Carlson explains, her decision to implement a controversial employee review system cut into morale and the products she pushed failed to offset declines in Yahoo’s ad sales and search market share.

Throughout her first two years as CEO, Mayer’s success or failures didn’t matter all that much. Yahoo’s stock continued to trend up thanks to an investment years earlier in Alibaba, the Chinese e-commerce giant, which finally went public in September 2014. That IPO gives Mayer more cash to play with, but there is little left to camouflage the struggles in Yahoo’s core business.

For now, Mayer and her team continue to work to improve ad revenue, improve its existing product lineup and ideally find a new breakthrough product to help make Yahoo relevant again. As Carlson explains, though, that is a Herculean task.

“Ultimately, Yahoo suffers from the fact that the reason it ever succeeded in the first place was because it solved a global problem that lasted for only a moment. The early Internet was hard to use, and Yahoo made it easier. Yahoo was the Internet,” Carlson writes. “Then the Internet was flooded with capital and infinite solutions for infinite problems, and the need for Yahoo faded. The company hasn’t found its purpose since.”

Over the years, a successful Hollywood executive, a brassy self-made woman and one the company’s founders have all tried and largely failed to achieve that mission. If Mayer does end up failing, at least she will be in good company.