New Office Tech You're Going to Crave This Year
Advertisement 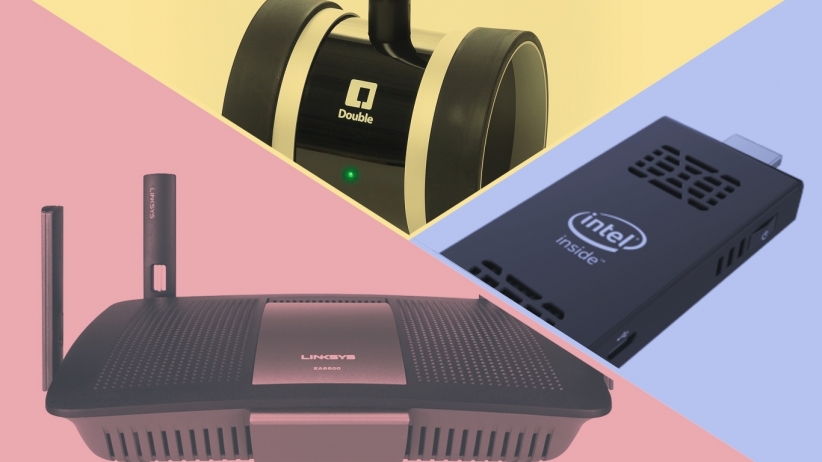 It might be time to give your office an upgrade. This year at the International Consumer Electronics Show in Las Vegas, we got a taste of some of the new tech headed to the corporate world later this year — and it looks pretty awesome.

There are new gadgets to keep you happy and healthy while you’re stuck behind your desk, and even a few new ways to tap into the office while you’re away.

Curious to see what’s out there? Here are a few of our favorite reasons to bust out the corporate card this year. Intel’s new Compute Stick turns any television into a Windows PC. The tiny device plugs into your television’s HDMI port, sort of like Google’s Chromecast, and transforms it into a Windows 8.1 or Linux machine.

Packed inside is an Intel quad-core Atom processor, giving you the power of a desktop computer in your pocket. A built-in SD card slot offers on-board storage and Windows Remote Desktop can give you access to your computer at the office while you’re on the road.

The best part? It’s expected to retail for around just $150 when it launches later this year. You’ll have a hard time finding a monitor that has quite the look of Dell’s new 27-inch UP2715K. The 5k monitor has more than 14 million pixels, and is the perfect upgrade for your art department or for anyone on staff who deals heavily with photos and video.

The $2,500 monitor supports up to 1.07 billion (that’s billion with a B) colors and has a built-in Custom Color mode to tweak how they look to match your personal needs. What’s more, it comes packing built-in Harmon Kardon speakers and can be used in landscape or portrait mode or even mounted to your wall.

What if you could be in the office and relaxing on the beach at the same time? With Double’s telepresence robot, you basically can.

Telepresence robots is a growing category, and Double is one of our favorites. The robot is built sort of like a Segway for your iPad Air and can be controlled from anywhere in the world from your phone, tablet or computer.  A built-in battery keeps you rolling around the office for six to eight hours on a single charge, and once depleted, an included dock will juice the device up again in just two hours.

While we’d ideally be using it poolside, it can also be a great thing to have if you work with teams in several offices. Rather than just dial into conference calls, you can actually sit in on the meeting or roll around the office across the country and chat with co-workers. While the $2,500 robot doesn’t completely replicate the in-person experience it gets pretty close, and will certainly save the company some cash on plane tickets. Linksys’ newest router can take your office’s Wi-Fi to a new level. TheEA8500 is the company’s fastest Wi-Fi router yet and is capable of pumping out interruption-free data at blazingly fast 1.73 Gigabits-per-second (Gbps) where those speeds are available. To put things in perspective, 1.73 Gbps equals 216.25 Megabytes-per-second. Take a second and check out your current Wi-Fi speed at speedtest,net. We’d imagine it’s nowhere in that ballpark.

The device has four Gigabit ethernet ports as well as eSATA and USB 3.0 connections. It’s expected to ship this Spring for $280, along with an $180 1.3Gbps version. By now, we all know that sitting for prolonged periods of time is bad for our health. Humanscale thinks it has created a solution with its new $200 OfficeIQ add on for its line of adjustable desks.

The device has integrated sensors that keep track of how long you’ve been sitting or standing while you work, and offers intelligent suggestions on when you should make a change. Notifications are sent through an app made by Tome, and take into account your schedule for the day. That means it might hold off on a suggestion for you to stand until you’re done with a virtual meeting or finish an important phone call.

Over the course of the day you’ll move around more, burn more calories, and hopefully be a bit more productive in the process.