New Samsung W21 is almost identical to its Galaxy Z Fold 2, but you can't buy it
Advertisement 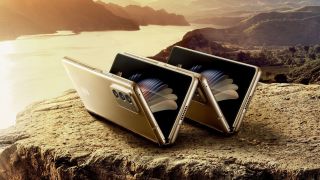 Samsung has launched a new foldable phone called the Samsung W21, but it’s currently exclusive to those in China. The newly launched W21 is a 5G device and comes with very similar specifications to the Galaxy Z Fold 2.

There are a few tweaks that make it a little different to the Z Fold 2, including a larger design (but the screens remain the same size), and a new color in the form of the metallic gold you can see above.

Oddly, this isn’t a China-only version of the Galaxy Z Fold 2 as the company sells that device in the country.  Samsung has also removed any ‘Galaxy’ branding from the device for reasons that are currently unclear.

What’s different on the W21?

Most of the spec on the Galaxy Z Fold 2 remains the same here with the phone offering a 7.6-inch Dynamic AMOLED screen with a 120Hz refresh rate. When folded, you get a 6.2-inch AMOLED screen on the outside.

The W21 is powered by a Qualcomm Snapdragon 865 Plus chipset as well as 12GB of RAM and there’s 512GB of storage.

It features the same triple camera setup from Z Fold 2 with a 12MP primary shooter followed by 12MP ultra-wide lens and a telephoto lens of 12MP. Selfies are handled by a 10MP shooter.

The Samsung W21 comes in the single gold color option, and instead of a plain back panel the W21 comes with vertical lines that run from top to bottom to give it a ribbed texture.

A picture posted by Ice Universe on Twitter shows that the W21 is also slightly bigger than the Z Fold 2 for unclear reasons, as the display sizes and the battery capacity are identical.

We’ve yet to hear from Samsung on whether this phone will be coming to other markets, but it currently looks like you won’t be able to get this device at all unless you live in China.