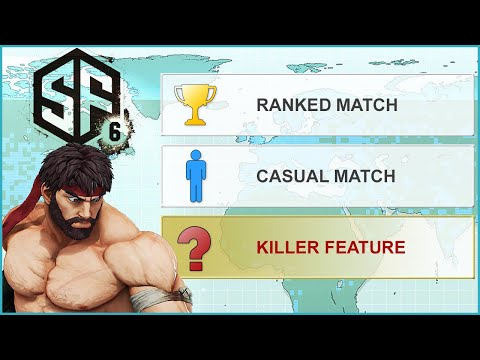 New features for fighting games are a very important part of the equation. You want to innovate and excite your audience by adding new things into the mix, but that can be difficult to do.

The latest idea I’m proposing has never been done in the Street Fighter franchise, let alone pretty much the majority of other fighting games, but it would add a third online mode to what we saw offered in Street Fighter 5.

This feature would be an online test mode permanently baked into the game, so Capcom can test balance changes, new DLC characters and other things without players having to worry about these variables impacting their online rank.

The “Test match” online option would be available right alongside the Ranked and Casual modes gamers have become accustomed to via Street Fighter 5, but this new flavor would have several differences.

Matches would be based on connections only, irregardless of how many league points you may have. Also, you could not lose or gain points in this mode.

This mode would be a call back to old school arcade fighting games like Super Street Fighter 2 Turbo or Mortal Kombat, where you could find hidden bosses (upcoming DLC) and play against a character who has already been announced, either being controlled by the developers, or potentially other players, before they’re available to the mass public.

Capcom would have MUCH more data available from the player base to use in balancing a character before they’re officially released as DLC, and they’d be able to see what the community is doing with the new characters. Thus, hopefully avoid very poorly balanced fighters by understanding how the player base is going to use said characters ahead of their official release.

Gamers could also get a preview of what balance changes their main characters may see in an upcoming patch, and this could potentially be indicated via a version numbering system on the warm up screen, so you’d know if you’re playing a character who’s had alterations made to them, or not.

We explore the subjects outlined here and a good bit more in the video below, including potential pitfalls Capcom will need to avoid with this mode.