People around the world are booking Airbnbs in Ukraine. They don't plan to check in
Advertisement 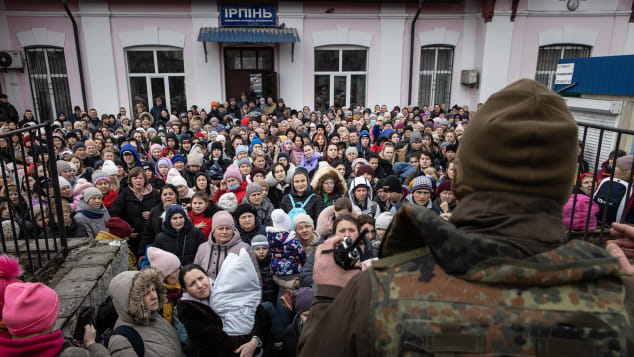 (CNN) — Volodymyr Bondarenko spends most of his day holed up in his apartment in the Ukrainian capital of Kyiv.
Between listening for air-raid sirens and frantically messaging family for updates, he trades messages with a flurry of Airbnb guests booking his one-bedroom rental in the heart of Ukraine’s capital.
Sometimes, he sends a crying emoji. Other times, the praying hands emoji. It’s his way of thanking those who are booking his apartment — even though they have no intention of ever showing up at his door.
Airbnb hosts in Ukraine are being flooded with bookings from people all over the world who have no plans to visit. It’s part of a creative social media campaign to funnel money to besieged Ukrainians who need financial assistance as Russian forces bombard their country and cut off services.
The idea has picked up momentum. On March 2 and March 3, guests from around the world booked more than 61,000 nights in Ukraine, according to an Airbnb spokesperson. More than half of those nights were booked by Americans, the spokesperson said.
CNN spoke to people in the United States, the United Kingdom and Australia who’ve booked Ukrainian rentals on Airbnb in recent days.
“More than 10 bookings came in today. This was surprising, it’s very supportive at the moment,” Bondarenko, 36, told CNN early Friday. “I told many of my relatives and friends that I plan to use this money to help our people who need it at this time.”
Ukrainian soldiers unload weapons from the trunk of an old car northeast of Kyiv, Ukraine.
Aris Messinis/AFP/Getty Images

People are leaving messages of support for their Ukrainian hosts

The call for guests to book Airbnbs in Ukraine started online, where supporters urged people to book rooms as close to a check-in date as possible to ensure hosts receive fees quickly. Airbnb typically issues a payout about 24 hours after a guest checks in.
Organizers of the campaign also are urging people to make sure the rentals are operated by individuals and not companies.
New York City resident Anne Margaret Daniel saw the Airbnb posts on social media and sprung into action.
The literature lecturer at the New School booked a two-night stay at an apartment in Old Kyiv, a charming and historic neighborhood known for Orthodox churches and quirky animal sculptures. Photos on the Airbnb listing show immaculate wooden floors, an overstuffed gray couch and a sloped skylight. The two-bedroom apartment is nearly fully booked for the next few months.
In her booking, Daniel included a message for the host:
“I hope that you, and your lovely apartment, are safe and that this horrible war is over … and Ukraine is safe,” it said. “I will come and see you one day, please count on it, and will stay with you when we visit. God bless you and God be with you, your city, your country.”
Her host, Olga Zviryanskaya, soon responded.
“We will be glad to see you in the peaceful city of Kyiv and hug,” she said.
Zviryanskaya and her three children lived in the capital for years. After Russian forces invaded and threw the city into turmoil, she packed her children and a few belongings in a car and fled to the region near Cherkasy, a city in central Ukraine. The 100-mile trip took nine hours.
Now, Zviryanskaya is allowing people who have no way out of Kyiv to stay in her apartment. Messages from strangers have provided comfort as she adjusts to the new reality.
“We are alive, but we want to live as before,” she said. “It’s very scary in Kyiv. Every word of support is valuable, not necessarily money.”
Someday when the conflict is over, Daniel hopes to book Zviryanskaya’s apartment again. This time, she intends to visit.
People take shelter in the Dorohozhychi subway station, which has has been turned into a bomb shelter in Kyiv, Ukraine.
Chris McGrath/Getty Images

‘You are my heroes,’ one Ukrainian host says

Andre Osypchuk is a retired seaman and an Airbnb host in Kyiv.
He was surprised to see Brooklyn-based Valerie Zimmer — who was born in Kyiv and stayed at his rental three years ago while visiting family — recently booked his place for a week’s stay.
Osypchuk remains in the city with his wife and two kids. He has since set up an automated message to handle the influx of Airbnb requests.
“Thank you very much for your help, which is so much needed now,” it says. “I have been standing in line for food since the morning, which I can now buy with the money you sent.”
Zimmer reached out to him directly to see how he was and offer help. She’s urged her friends to seek out similar Airbnb rentals across Ukraine.
“The money will get directly to the people, and quickly,” she said.
New York City resident Careyann Deyo, 45, booked an Airbnb rental attached to someone’s home in Ukraine to make sure her payment reached a resident.
“I donated to larger organizations as well, but felt this had a more immediate impact,” Deyo says.
Deyo’s host sent her a message after finding out she was sending a payment even though she did not plan to check in.
“I’m crying. You are my heroes,” it said.
A member of the Ukrainian military gives instructions to women and children boarding an evacuation train in Irpin, Ukraine.
Chris McGrath/Getty Images

Airbnb has said it is offering temporary housing in neighboring countries to up to 100,000 Ukrainians who are fleeing their country because of the Russian invasion. It’s also waiving guest and host fees in the country.
“We are so humbled by the inspiring generosity of our community during this moment of crisis,” said Haven Thorn, a company spokesperson. He asked those willing to help by hosting Ukrainians or donating to their efforts to visit Airbnb’s website for more information.
Some people are warning that scammers could set up fake Airbnb accounts in Ukraine to capitalize on the world’s generosity. Those booking rentals are encouraged to examine the listing carefully and read reviews to make sure the host is legitimate and has been operating for some time.
One of the social media influencers behind the Airbnb effort also has encouraged his followers to patronize Ukrainian merchants on Etsy but ask sellers not to ship any goods. Etsy has announced it’s canceling the current balances and fees owed by all sellers in Ukraine.
Bondarenko, the Airbnb host in Kyiv, said while banks are closed in some cities and Airbnb payments may not reach hosts as fast as usual, the financial assistance is comforting in a world filled with terror and uncertainty.
Equally important, he and other hosts said, are the words of support they hear from strangers a world away.
Post Views: 248