Phones are getting too heavy: this carbon-fiber phone offers an alternative
Advertisement 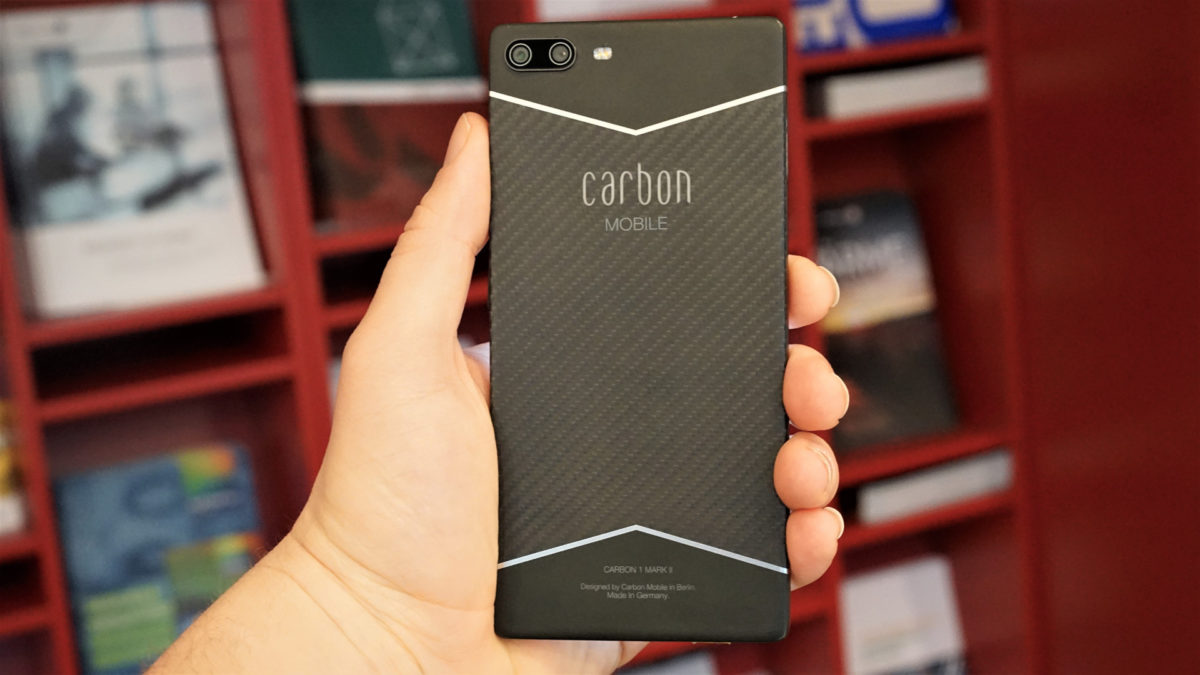 There’s probably no need to remind you, kind reader, that the likes of venerable BlackBerry and zero-hit-wonder Essential were killed off in the past weeks.

Managing to convince people to buy a premium smartphone that isn’t branded with Apple or Samsung is a tough job. Still, companies are trying.

Enter Carbon Mobile (not to be mistaken with Karbonn Mobiles, the Indian phone brand), a fearless and brand new Android smartphone manufacturer, working at the micro-scale. The debut phone for the company, based in Berlin, is the Carbon 1 Mk II, and, unsurprisingly, it’s made from carbon fiber.

The Carbon 1 Mk II has a single purpose with its carbon fiber build: weight. It’s a really lightweight device. At just 125 grams, and 6.3mm thick, picking it up feels like it’s missing some kind of key component, like the battery or screen. But that’s a good thing. By comparison, the new Samsung Galaxy S20 Ultra is 222g and the iPhone 11 194g. This thing is thin, and remarkably light.

The Mk II branding here with the Carbon 1 tells a story, unlike Sony’s debacle.

Unlike the Sony Xperia 1 II naming silliness, the “Mk II” branding here with the Carbon 1 attempts to tell a story. The Mk 1 was the first prototype, which was never mass-produced. As Carbon Mobile refined its product it iterated to the Mk II. The Mk II is now close to being fully ready for the market, but not quite the mass market.

Carbon Mobile isn’t pretending it will have a gigantic impact, at least initially. It’s a self-confessed niche product, with limited availability, and a price that makes it one for gadget guys.

Will it work? Let’s take a look at the company’s first product.

The 6.0-inch Carbon 1 features an AMOLED display, a MediaTek P90 with 8GB of RAM and 128GB of internal storage, a dual 16MP rear camera, and a 20MP front-facing camera. There’s some bezel at the top and bottom as you can see. It’s not an overt forehead/chin combo., but it is noticeable.

The Carbon 1 Mk II packs a 3,050mAh battery, and that carbon-fiber body wraps around the back, with a fingerprint sensor on the side.

It’ll run Android 10 out of the box, and the dual-rear and selfie camera system has had third-party tuning by a specialist company. (Carbon Mobile couldn’t further specify the company name performing the camera optimization, and we weren’t testing final-spec software during hands on time.)

The phone’s display is protected by Gorilla Glass 6, but a new thin spec of glass. At 0.4mm thick, it was developed by Corning specifically for the Carbon 1. Corning saw a challenge it liked, according to Carbon Mobile. Regular Gorilla Glass 6 is between 0.6mm to 0.8mm on most phones.

The Carbon 1 also features a monocoque design, and the company is aiming for a score of 9 or 10 on iFixit’s fixability scale, with spare parts and repair guides to be provided. It’s not quite modular, but it is designed to be repairable — a novel approach in the day of the sealed-up glass slab.

The Carbon 1 is thin on power. None of the above specs will blow the minds of your typical smartphone enthusiast. The MediaTek Helio P90 SoC is a little bit 2018, rather than 2020. The small battery doesn’t look like it’ll win any endurance races either, not that I would want to game on it for long. The Android 10 build we saw was very light, close to stock.EDITOR’S PICK

A definitive guide to everything that affects smartphone battery life

Carbon Mobile knows the phone is competent without being outstanding, and the focus is really on the attributes of carbon fiber. The material is notoriously difficult to work with for small objects, and the perfect tolerances required in a smartphone are hard to achieve.

Carbon-fiber is also a terrific insulator, which is essentially the worst of all choices for a smartphone that needs radio reception. The company solved this problem through the use of HyRECM technology, or hybrid radio-enabled composite materials, an advanced material not used in smartphones before. It has been deployed in key areas for the antennas to ensure adequate reception is available.

Carbon-fiber: ‘extremely difficult’ to work with for a number of key smartphone neccessities.

Another factor of insulation is heat dissipation. Calling the problem “extremely difficult,” Carbon Mobile worked to use other materials in the device to help move heat away from the processor. These problems explain why other manufacturers may have experimented with carbon fiber — including some niche phones that featured the material as a covering — but never committed to using it as the primary build material in a phone.

The company has a further eye on carbon fiber accessories, including wireless earbuds in later 2020, a white Carbon 1 product by 2021, and more.

I had a few minutes in Berlin to play with early prototypes of the Carbon 1 Mk II, and the light feeling is really there. The lightness will be the major takeaway for everyone, while the thin profile also makes it very easy to pocket. It’s not every day that a company brings along a scale to prove the weight of the device is accurate

Carbon fiber is tough but it’s not particularly high on the Mohs hardness scale, coming in at about a 2. That means shoving the device into your pocket with keys and coins probably will scratch it. Carbon Mobile explained it has applied a nano-coating to offer better protection. At the time of our briefing, extended lifetime tests (including harsh drop tests) were taking place to understand overall lifecycle toughness. The finish also seemed to be easy to mark with grease from hands and fingers. The logo on the back will illuminate in a Razer-ish kind of manner, and pulse for notifications.

Ironically, my Dell XPS 15 has a carbon fiber finish, but the feeling is very different.

So is all the materials-wrangling worth it for the carbon fiber look and the light weight? It’s easy for me to say no, but I’m not the target audience.

I prefer both value and well-proven technologies for my money. But for gadget fans seeking to impress with something brand new, and with an initial what-on-earth impact due to the weight and spec, it hits those marks. I feel more like this device could be the start of something interesting in consumer products. While wireless earbuds are already light, it may be that Carbon’s promised carbon fiber earbuds are even more comfortable and better in-ear than plastic.

The Carbon 1 Mk II will be priced at €799, meaning it’s at a massive premium considering the specs and general offering. However, Carbon Mobile points out none of the comparable devices are made out of anything nearly as interesting as carbon fiber. The carbon fiber wouldn’t tempt me to buy it, but you may feel different, especially if owning something unique is part of your swag.

In terms of availability, it’s worth mentioning the Carbon 1 won’t be available in the U.S. or in Asia. While these are huge markets, it is understandable that they might be considered too difficult to crack for a first attempt, at least initially.

Instead, Carbon will sell the Mk II in the company’s home, Germany, along with Austria and Switzerland by late spring or summer. The company is hoping to expand to Scandinavia and the Nordics within months, and sell into the Netherlands, Belgium, and the Middle East by late 2020 or early 2021.

We’ll take a closer look at the final Carbon 1 Mk II device as review units are made available.