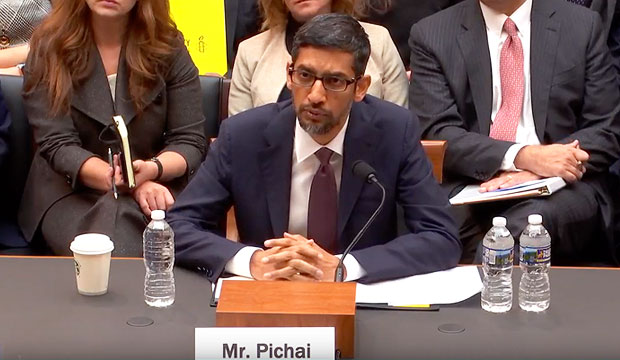 Google is not working on a bespoke search engine that caters to China’s totalitarian tastes, and it has no plans to develop one, CEO Sundar Pichai told lawmakers on Capitol Hill Tuesday.

“Right now, we have no plans to launch in China,” he told members of the U.S. House Judiciary Committee at a public hearing on Google’s data collection, use and filtering practices.

Pichai acknowledged that the company had assigned some 100 workers to develop a search engine for totalitarian countries, however.

“We explored what search would look like if it were to be launched in a country like China,” he revealed.

A report about a Google search engine for China appeared in The Intercept this summer.

The project, code-named “Dragonfly,” had been under way since the spring of 2017, according to the report, but development picked up after Pichai met with Chinese government officials about a year ago.

Special Android apps also had been developed for the Chinese market, The Intercept stated, and had been demonstrated to the Chinese government for a possible rollout this year.

“We certainly hope they abandoned those plans,” said Chris Calabrese, vice president for policy for the Center for Democracy & Technology, an individual rights advocacy group in Washington, D.C.

“We didn’t think it was a good idea to build a search engine that would censor speech in order to go into the Chinese market,” he told the E-Commerce Times.

Google may have been testing the waters with its Chinese browser, maintained Russell Newman, assistant professor for the Institute for Liberal Arts & Interdisciplinary Studies at Emerson College in Boston.

“It’s an example of a firm seeing how far down the road it can go before it receives pushback,” he told the E-Commerce Times. “It discovers a limit, then pushes that limit a little more. I’d be surprised if they wholly gave up on the search engine for China.”

In his opening remarks to the committee, Pichai declared that protecting the privacy and security of its users was an essential part of Google’s mission.

“We have invested an enormous amount of work over the years to bring choice, transparency and control to our users. These values are built into every product we make,” he said.

“We recognize the important role of governments, including this committee, in setting rules for the development and use of technology,” Pichai added. “To that end, we support federal privacy legislation and proposed a legislative framework for privacy earlier this year.”

Pichai also addressed a burning issue for Republican members of the panel.

“I lead this company without political bias and work to ensure that our products continue to operate that way,” he said. “To do otherwise would go against our core principles and our business interests.”

Among the Republicans on the committee who raised the issue of unfairness with respect to the way Google’s search algorithm treats conservative views was Mike Johnson, R-La.

“My conservative colleagues and I are fierce advocates of limited government, and we’re also committed guardians of free speech and the free marketplace of ideas,” he told Pichai.

“We do not want to impose burdensome government regulations on your industry,” Johnson continued. “However, we do believe we have an affirmative duty to ensure that the engine that processes as much as … 90 percent of all Internet searches, is never unfairly used to unfairly censor conservative viewpoints or suppress political views.”

“You’re so surrounded by liberality that hates conservatism, hates people that really love our Constitution and the freedoms that it’s afforded people like you, that you don’t even recognize it,” he told Pichai, who was born in India.

“It’s like a blind man not even knowing what light looks like because you’re surrounded by darkness,” Gohmert added.

Despite Republican claims of liberal bias in Google’s algorithm, “there isn’t any evidence to back that up empirically,” Calabrese said.

Google has harmed competition in Europe by favoring its own products and services over rivals, and by deprioritizing or delisting its competitors’ content, he noted citing European Commission findings.

“It is important for the U.S. government to follow the lead of other countries and closely examine the market dominance of Google and Facebook, including their impact on industries such as news media,” observed David Chavern, CEO of the News Media Alliance in Arlington, Va., a trade association representing some 2,000 newspapers in the United States and Canada.

“We will continue to urge for more hearings to examine ways in which the duopoly impacts the business of journalism, which is essential to democracy and civic society,” he told the E-Commerce Times.

House and Senate hearings in recent months are just the prelude to data privacy legislation that could be introduced next year.

“Advocates have seen the need for privacy legislation for a long time,” he said, “and now that we have privacy legislation set to kick in in California in 2020, there’s a lot of companies who would rather be governed by a federal law than they would a bunch of different state laws.”

If a general privacy law is enacted, it shouldn’t use Europe’s General Data Protection Regulation as a model, maintained Alan McQuinn, senior policy analyst for the Information Technology and Innovation Foundation, a public policy and technology innovation organization in Washington, D.C.

“We don’t want to see the GDPR enacted here in the states,” he told the E-Commerce Times.

“It is highly likely to create a drag on the European economy and hurt innovation and businesses,” McQuinn explained.

Privacy rules should be styled to fit industries, such as healthcare, finance and commerce, he suggested.

“The sector-specific approach that the U.S. has taken toward privacy has allowed for more innovation,” McQuinn noted, “and created the powerhouse of the digital economy that we have here.”

ROBOT TURNS OUT TO BE MAN IN SUIT