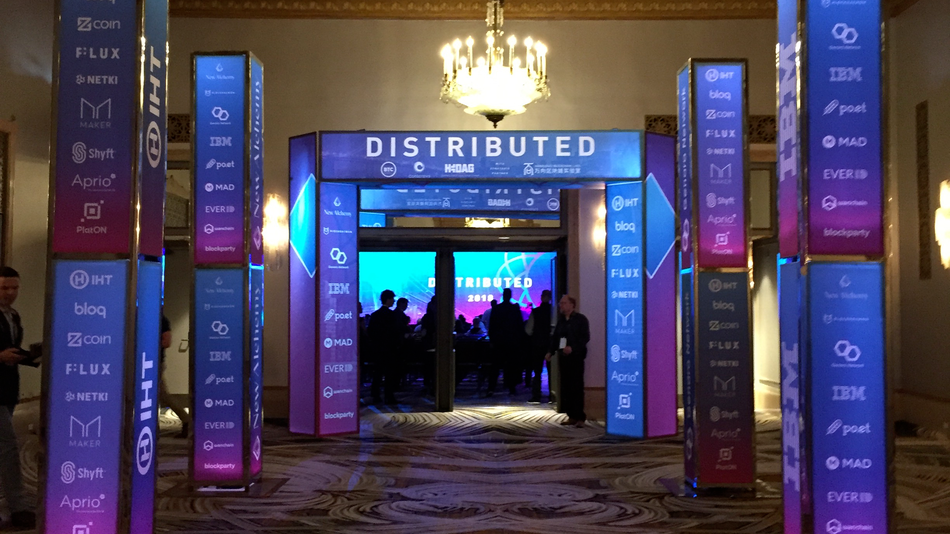 A booming welcome worthy of a Vegas boxing match is being delivered over the PA as attendees at the Distributed blockchain conference gather to hear the gospel of “unlocking the global power of decentralized business.”

However, if the half-full auditorium is any indication, it’s a message that needs a few more converts.

Distributed lacked the over-the-top hysterics and flash of Consensus, the major blockchain event held in New York City this past May. There were no Lamborghinis parked outside, no fake protests, and no blockchain-based beer vending machine. Instead, Distributed presented a sober and cautious evaluation of the cryptocurrency, ICO, blockchain, and token space as it now exists.

“Blockchains are not a faster way to do anything.”

Frankly, it was refreshing. To not have a thousand different confused voices yelling about a society remade in Satoshi’s image while simultaneously shilling useless tokens felt like a luxury.

But before the speakers delivered their words of caution, we were treated to what could only be described as a trailer for the wanna be action movie that is the world of cryptocurrency. Because in this industry, even serious projects need a hype track.

And, to be fair, when you’re talking billions of dollars in market cap, apparent irrational exuberance may not be so irrational after all.

Thankfully, however, we were soon brought back down to earth.

“Blockchains are not a faster way to do anything,” Brian Behlendorf of Hyperledger told the crowd gathered for a panel discussion covering the “global state of blockchain.” He doubled down, adding that “they’re a technical solution to what is really a market structure problem.”

So, no, blockchains aren’t going to save the world — no matter what PR firms tell you.

Behlendorf wasn’t the only one attempting to manage the expectations of any cryptocurrency true believers in the audience. Emmanuel Abiodun, of Oracle’s Autonomous BlockchainCloud Service, dumped some water on those trying to tokenize the universe.

“I don’t think a lot of these tokens are solving fundamental problems,” he observed. “It’s actually creating a more complex society than I can envisage.”

And yeah, requiring the purchase of a 21st century Itchy and Scratchy Money equivalent as a prerequisite to participating in society does sound like a rather inefficient way to go about things.

To hammer it home, Abiodun emphasized that Oracle’s goal is to stay away from cryptocurrencies altogether. It’s probably a smart move — though IBM and its blockchain socks may disagree.

Overall, day one of the two-day Distributed conference managed to accomplish something most in the blockchain and cryptocurrency space would never dream of: communicate realistic expectations.

The conference organizers, presenters, and attendees all appeared genuinely interested in exploring what blockchains could mean for their respective businesses — without all the false promises and bullshit so endemic to industry.

Good for them. And who knows, maybe in the end a cool head is what it takes to get to the moon.