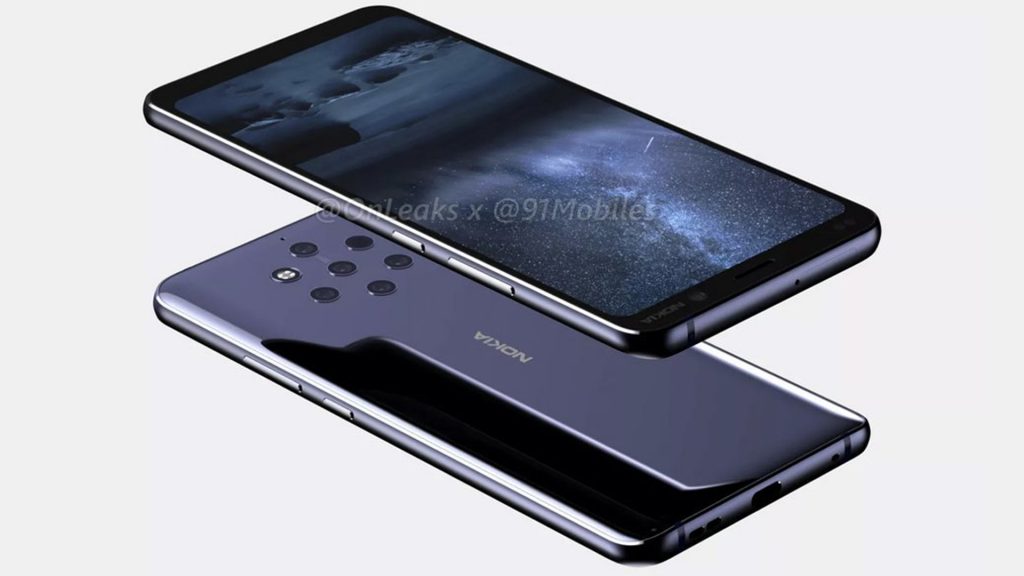 This MWC, Nokia is going to hold a press event where it is expected to announce a new flagship device, the Nokia 9 PureView. Today, a seemingly official render comes to us from 91Mobiles which gives us a good look at the Nokia 9’s hardware.

Probably the first think you’ll notice is those thick upper and lower bezels. Many companies are pushing the limits of thin bezels and it seems that Nokia could be at a disadvantage in the eyes of other consumers. This design is more representative of 2017 than 2019.

However, where the Nokia 9 could be ahead of all the competition is in its five-camera system on the rear. There are seven cut-outs arranged in a circular fashion which include five cameras, one LED flash module, and one reserved for auxiliary camera sensors like perhaps a laser-assist focus or white balance meter. The camera is branded with Nokia’s imaging partner: Zeiss. If Nokia can successfully pull off a really powerful camera, the display wouldn’t matter at that point.

The power key and volume buttons adorn the right edge of the phone’s frame, but we also do see an in-display fingerprint scanner for authentication. Above the display are Nokia branding, a selfie camera, earpiece, and two other essential smartphone sensors (light and proximity) towards the left.

The Nokia 9 PureView is expected to be announced during the MWC on a February 24 eventand it rumored to come with last year’s Snapdragon 845 CPU. It’s also believed that Nokia might release an updated 5G-compatible version of the phone with perhaps the Snapdragon 855. Meanwhile, there’s a 5.99-inch display with QHD+ resolution, a 4,150 mAh battery, and 8GB of RAM.