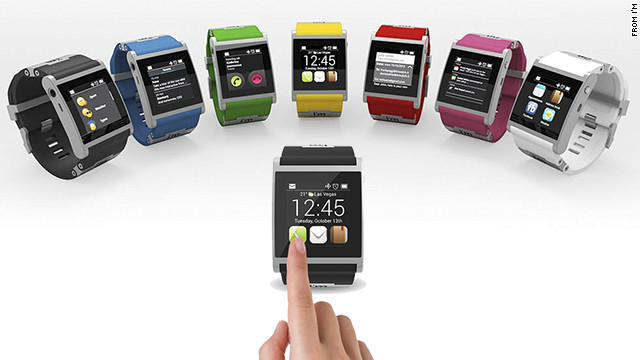 The Italian-made aluminum I’m Watch is one of the pricier smartwatch options at $399. It comes in seven colors and runs the Droid 2 operating system. It connects to Android smartphones using Bluetooth to get texts and e-mails, check social networks, make calls and see calendar events.
Samsung may be the latest company to enter the red-hot wrist-tech market. The South Korean company is planning to announce a new smartphone device that’s worn on the wrist in September, according to a report from Bloomberg.

The Android powered device will be called the Galaxy Gear and will be able to handle the smartphone basics: phone calls, Web surfing and e-mails, said the report. Samsung will announce the product at an event on September 4, just ahead of the big IFA consumer electronics show in Germany.

Samsung declined to comment on the report when contacted by CNN.

It would be no surprise that Samsung is investing in wearable technology, which could be the next major gadget category. The wearable tech market is expected to hit $1.5 billion in 2014, a huge leap from the $800 million it’s raking in this year, according to a report by Juniper Research.

Wrists are the most popular body part for the coming wave of wearable devices, followed by heads. The dream of a smartwatch has been around in popular culture for decades — cartoon detective Dick Tracy had an early version of one — but recent advances like smaller, cheaper sensors and low-power Bluetooth technology are finally making it possible to pack powerful features into tinier shells.

There are still limitations, and the current crop of wearables are primarily satellite devices that need to pair up with a nearby smartphone to access the Web. If Samsung’s Galaxy Gear is more smartphone than accessory, it could stand out from the competition.

All the major companies are angling for a piece of the action. Apple is likely developing its own smartwatch, Microsoft is rumored to be producing a prototype smartwatch that would run Windows 8, and Acer says it will release a wearable device in 2014, though it did not specific what type.

Sony, Pebble, I’m Watch and other manufacturers already have smartwatches on the market.

Meanwhile, Google is working out the kinks on Google Glass, its connected headset due early next year.

Simple wearable fitness devices like the FitBit are already extremely popular and many of their features, like monitoring heart-rate or tracking movement, will likely be included in the bigger products.