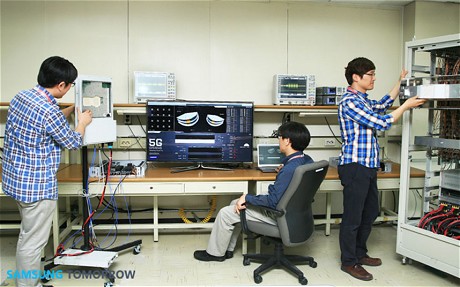 New technology paves the way for movie downloads in less than a second, Samsung claims.

Despite the fact that major countries including the UK and China have yet to complete their 4G mobile phone network roll-out, South Korean Samsung claims its new technology could offer “ubiquitous” access to ultra high-speed networks operating at 100 times current speeds and offering regular gigabit access.

5G networks could allow “a wide range of services such as 3D movies and games, real-time streaming of ultra high-definition content, and remote medical services,” Samsung claimed in a blog post.

The ‘mmWave Mobile Technology’ is the first system that claims to be fully fledged, although research into 5G has been going on in laboratories around the world for some time. Last year, Britain’s University of Surrey announced £35m funding for a research centre back by Huawei, Samsung, Fujitsu, Telefonica and others.

Up to now, however, scientists have believed that high-frequency wavebands were generally not suitable for long-range communications required by mobile networks.

“The implementation of a high-speed 5G cellular network requires a broad band of frequencies, much like an increased water flow requires a wider pipe,” said Samsung. “While it was a recognized option, it has been long believed that the millimeter-wave bands had limitations in transmitting data over long distances due to its unfavorable propagation characteristics.”

While current 4G networks in the UK use bands as low as 800MHz, Samsung’s new research has concentrated at much higher frequencies and the company claims it has worked over distances up to 2km.

“Samsung’s new adaptive array transceiver technology has proved itself as a successful solution,” the company claims. “It transmits data in the millimeter-wave band at a frequency of 28 GHz at a speed of up to 1.056 Gbps to a distance of up to 2 kilometers. The adaptive array transceiver technology, using 64 antenna elements, can be a viable solution for overcoming the radio propagation loss at millimeter-wave bands, much higher than the conventional frequency bands ranging from several hundred MHz to several GHz.”

A commercially available 5G network is not anticipated until after 2020, although Samsung claims it is aiming to have commercialised 5G by then. Its focus on mobile infrastructure technologies could mark a new plan to challenge the dominance of companies such as Huawei in this area.

“Samsung’s latest innovation is expected to invigorate research into 5G cellular communications across the world,” Samsung claimed. “The company believes it will trigger the creation of international alliances and the timely commercialization of related mobile broadband services.”

BEQUEAHTING THE KEYS TO YOUR DIGITAL AFTERLIFE

Early 4G adopters give their verdict on the service